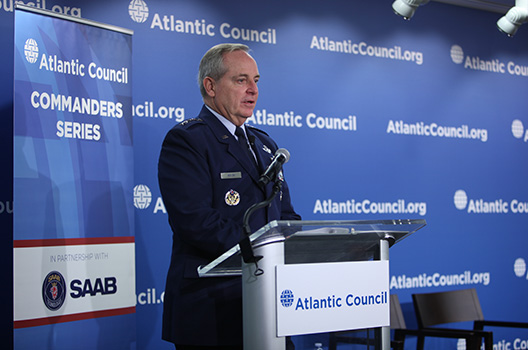 On December 1, 2015, the Atlantic Council hosted General Mark Welsh III, Chief of Staff of the US Air Force, for a Commanders Series event entitled, “The Future of American Airpower.” In a discussion moderated by the Council’s Barry Pavel, Vice President, Arnold Kanter Chair, and Director of the Brent Scowcroft Center on International Security, General Welsh spoke to a distinguished audience of government officials, military personnel, corporate executives, and academics about the current and future state of American airpower. His comments focused in particular on the unique challenges faced by the US Air Force, among them the evolving threat of ISIS, a resurgent Russia, increasingly sophisticated cyberattacks, the growing volatility of the space domain, and the uncertainty caused by political and budgetary dynamics here in the United States.

General Welsh stressed that to tackle these challenges, the US Air Force will need to concentrate on three broad themes: first, it must continue to modernize and advance its capabilities despite the budgetary challenges it faces. This is the only way it can stay ahead of competitors and prepare for the uncertainties of future warfare. Second, the US Air Force must attract and retain the best people, and the way it will do this is by providing personnel with the best possible training, and also a sense that they are engaged in meaningful work. Third, the US Air Force must intensify its collaboration with friends and allies across the world to complement its own capabilities, as well as to identify and respond to emerging threats more decisively.