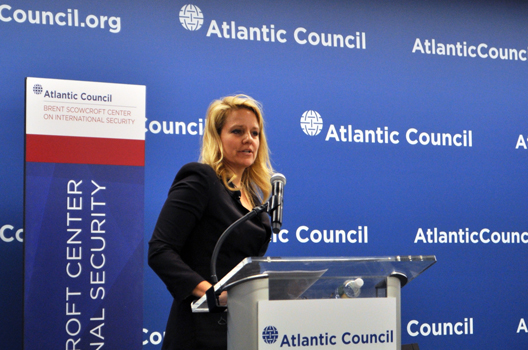 According to Shotwell, SpaceX strives to change the paradigm of reliability of access to space. In her address to the Atlantic Council Shotwell warned that American national security space launch was at an “unfortunate place” since Americans must ride on Russian craft to leave the atmosphere. Employing a design philosophy based “on redundancy as well as simplicity,” SpaceX now designs and manufactures Falcon launch vehicles and the Dragon spacecraft. Through one of the finest examples of public-private partnership, according to Shotwell, SpaceX has created an internationally competitive American launch vehicle. “We own our own technology” stated Shotwell as she attributed such newfound American competitiveness to the financial and strategic benefits of vertical integration.

General James E. Cartwright, former vice chairman of the Joint Chiefs of Staff and Atlantic Council board director gave introductory remarks where he discussed his time in government visiting the then-nascent SpaceX facility, also adding his laudatory comments about the Atlantic Council Captains of Industry series.

This event was part of the Atlantic Council Captains of Industry series which is a platform for senior defense industry executives to address the public interests their companies serve and the public policies that shape their markets.