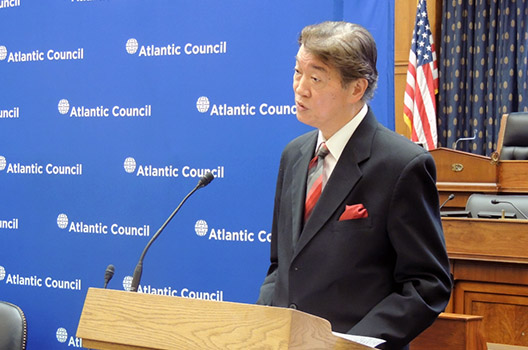 Signed in 1979, the Taiwan Relations Act (TRA) serves as the cornerstone of US-Taiwan relations. It guarantees crucial support for Taiwan’s security, economic prosperity, and democratization from the United States.

The Atlantic Council celebrated the thirty-fifth anniversary of the TRA on Capitol Hill with a discussion on the future of the US-Taiwan relationship. Rep. Ed Royce, chairman of the House Committee on Foreign Affairs, and Dr. Shen Lyushun, representative of the Taipei Economic and Cultural Representative Office in the United States, shared their perspectives on the US-Taiwan relationship and what role Taiwan could play in President Obama’s policy of rebalancing toward Asia.

“I made Taiwan one of my legislative priorities,” says Royce. “America’s continuous support to Taiwan is more important than ever.” Royce introduced recent efforts made by Congress., including passage of a bipartisan bill authorizing the sale of four naval vessels to the Taiwanese Navy. and strengthening bilateral trade and investment bonds between the US and Taiwan. .

Royce highlighted the significance of US-Taiwan economic relations and prescribed a three-step plan to expand cooperation. First, Royce emphasized, the US-Taiwan relationship must be inclusive and multi-dimensional. Second, Taiwan must join the Trans-Pacific Partnership negotiations in order to take advantage of the benefits its passage will bring to the Pacific region. Lastly, Taiwan should become more economically connected to Europe

Royce called for greater commitments from the Taiwanese government. Those commitments include increasing the defense budget to 3 percent of its GDP, encouraging domestic production and innovation of weaponry, as well as working to upgrade Taiwanese Naval capabilities. Royce also claimd that Congress has been making great efforts in cross-Straits dialogues between Washington, Taipei, and Beijing. “We want to lessen the tension and guarantee economic growth in that region.”

Shen began his remarks by appreciating US support for Taiwan’s peace and prosperity. He proclaimed that the TRA is a “win-win treaty” In that it facilitated the transformation of Taiwan’s economy from labor-intensive to capital-intensive. The TRA also benefits the United States, he continued. For every billion dollars of US export investment in Taiwan, there are more than 5,000 jobs created in the US. Looking forward, Shen proposed expanding the win-win game into a “triple-win” including Mainland China.

Shen noted that Taiwan has been enjoying a closer relationship with the mainland, Taiwan has a large business presence in numerous Asian countries and plays a  role in the new “EU-Asia Silk Road.”  Shen believes that Taiwan could serve as a strategic venue for the US to gain greater access to Mainland China and Asia at large.

The Cross-Straits Series looks broadly at major security and economic issues impacting the strategic landscape in the Asia-Pacific and how they will affect the US-China-Taiwan trilateral relationship. Past topics of discussion include growing Asian defense spending, the challenge of Chinese cyberattacks and espionage, and the impact of nationalism on security in East Asia.