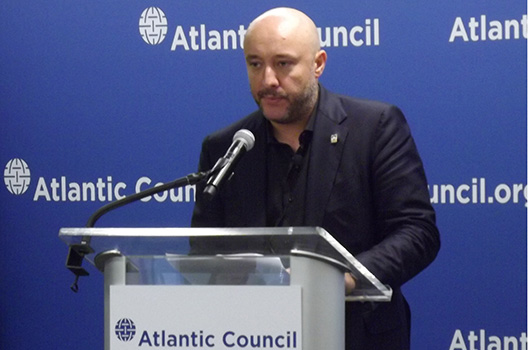 The Atlantic Council introduced Dave Antony as a nonresident fellow for the Brent Scowcroft Center on International Security on October 1st, where he will be working on the “Art of Future War” project. The event, moderated by August Cole, the project’s director, featured everything from 3D printers to flying drones which served as the backdrop to Anthony’s visions of what the future of unknown conflict will look like and how the US government should prepare for future threats. Anthony is most known for his work with the Call of Duty video game franchise where he has worked as a writer and director of the game.

Anthony’s presentation included his description of the possible threats to the United States and around the world in the near future while also providing solutions for how the government should prepare against such dangers. The main theme of his presentation was that in order to prepare for the future, you have to “start from outside the box and work your way in,” meaning that the traditional political structure of the United States lacks the creativity to prepare for future attacks. He repeatedly hearkened on the idea that the US government is great at reacting to attacks and challenges, but the government is not proactive enough to ensure that these attacks and challenges do not occur.

In his presentation, Anthony showed clips of Hollywood films which showed scenes that portrayed events similar to those of the attacks of September 11, 2001 and Mumbai in 2008 before the actual attacks occurred. This message emphasized that the creative community of Hollywood and now video games have the foresight to assist the government to plan for what dangers may arise in the future. These dangers include profound artificial intelligence, drones, cyber hackers, and others. Ominously, Dave believes that “there are a lot more attacks coming soon.”

His solution to the government’s lack of proactivity is to think of future attacks as issues that will not happen in the future, but instead as attacks that have already occurred. An effective way to approach this way of thinking, he believes, is to make a list of likely attacks and to create solutions for each of them. In his view, many of the solutions to these problems would overlap, and making policy changes to address these solutions and problems may go a long way in preventing such attacks from occurring. Though he understands that such policy changes may be very costly, he believes that refusing to make these changes will be infinitely more expensive, as the next attack will “cost just the same or more as 9/11.”

Another point of emphasis on how to provide a creative impetus in the US government would be to improve communication and encourage productive debates between the government and the governed. Instead of having political leaders always thinking defensively, it would be much more beneficial and productive to think offensively in order to allow creativity and decisiveness to come out of the process. A method that he has employed in his creative background is to always consider the opposite point of view of your argument in order to focus and strengthen your argument to produce the best result. With this mindset and the proactive thought process about future attacks, Dave believes that the US government would have the skills necessary to prepare the country against any future crises that emerge.

The event was fantastic and the Scowcroft Center looks forward to hosting more events in the “Art of Future War” project series.