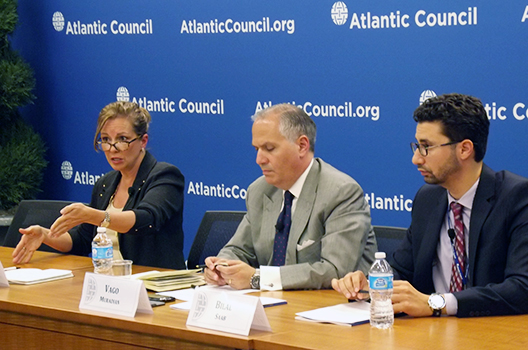 Dramatic changes in the world of defense, coupled with increasing political, financial, and fiscal pressures in the transatlantic community, have forced some of the most advanced US industrial allies and partners to make tough choices regarding their national defense programs, leaving them either more dependent on the United States or with capability shortages. Facing even more stringent circumstances, Saudi Arabia and the United Arab Emirates (UAE)—two modernizing US partners in the Gulf —confront a challenging path to domestic military industrialization. But with carefully articulated goals, modest expectations, smart strategies, effective financial management, and cooperation with Washington, Riyadh and Abu Dhabi can navigate some of the complexities of defense industrialization and overcome some of its key challenges.

Issues of national defense in Riyadh and Abu Dhabi are hardly local as they impact US strategic interests and goals in the Middle East. To promote stability and security in the Gulf, the United States needs its Arab partners to effectively share the burden. Toward that end, the development of indigenous defense capabilities of US allies is crucial and should be of interest to the United States.

To discuss the development of the defense industrial rise of both the UAE and Saudi Arabia, the Atlantic Council’s Brent Scowcroft Center on International Security hosted a public event to launch a report by Bilal Y. Saab entitled The Gulf Rising: Defense Industrialization in Saudi Arabia and the UAE. In it, Saab provides new analysis of and key policy insights on military industrialization in Saudi Arabia and the UAE and adds an important, though often overlooked, dimension to the US policy debate on the US-Gulf partnership.

The discussion was moderated by Vago Muradian, editor of Defense News, and included comments by Mary Beth Long, former Assistant Secretary of Defense for International Security Affairs and current founder and CEO of Metis Solutions.

Muradian opened the discussion by describing the current state of affairs in both countries: both nations are experiencing longer-term shifts in their economies, are energy players but increasingly national security players, and constitute a $2 trillion weapons and security market over the next ten years at a time when domestic spending is dropping. According to Saab, analysis of Gulf defense industrialization is long overdue. Saudi Arabia, which spends more on defense than any other nation in the Middle East (up to 10 per cent of its GDP, which amounts to $21 billion), is the world’s seventh biggest spender in military terms, while the UAE, the world’s fourth largest arms importer, fields an increasingly capable military, is a regional leader in command and control of air power, and has a “frontier” domestic defense hub that exports military items and displays its technologies at major defense exhibitions in several regions of the world. Saab described the big picture of what defense industrialization not only means for these two countries, but the region as a whole, and what the implications are for the United States.

Saab outlined the motivations for developing indigenous defense capabilities in Saudi Arabia and the UAE, including national security to confront external threats, economic diversification, prestige, and a strong interest in limited dependence on outside powers, particularly the United States. He also highlighted that self-sufficiency is nowhere near possible, but that in limited sectors, such as ammunitions; maintenance, repair, and operations (MRO); and adaptations of certain imported technologies, there has been steady progress. What are the implications for the United States and the region? Saab says this is all great news – the 2006, 2010, 2014 Quadrennial Defense Reviews have emphasized that the development of US partner capacities is a US strategic interest. There are risks, however. Should this trend of defense industrialization in the Gulf develop more rapidly, while political uncertainties between the United States and its partners go unaddressed, US security interests and plans in the region could be undermined. However, the partnerships between the United States and Saudi Arabia and the UAE are strong and enduring and still rest on a solid foundation of common interests. At the end of the day, the political relationships should be the main drivers of the defense partnerships.

Long emphasized that the Gulf in general, and the UAE and Saudi Arabia in particular, have purchased defense weapons and capabilities and are interested in developing their own capabilities in order to have more leverage in foreign policy and military options. Deterrence is also a high priority for developing indigenous defense capabilities. Long questioned the goal of self-sufficiency across all sectors – she highlighted UAE and Saudi interoperability with partners and deliberate attempts at aligning themselves accordingly.

The bulk of Long’s discussion centered on the offsets portion of Saab’s report, with the undercurrents of education, economic and trade decisions, and from a vendor’s standpoint, a business decision, which manifests predominantly in offsets. She highlighted Saab’s recommendation of having clarity of purpose and a strategy for defense industrialization in each country as a critical one – it seems to be unclear, however, how the defense industrialization policy fits into the overall military and security strategy, and how that dovetails with the trade and economic policy. Both Long and Saab emphasized the importance of human capital in both countries as well as the role that the private sector plays in both host countries.

The event was part of a larger series within the Brent Scowcroft Center on International Security’s Middle East Peace and Security Initiative and its focus on Gulf security and the future of transatlantic engagement in that vital region.