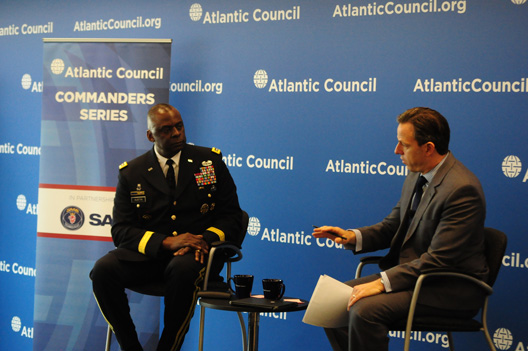 “We have been fighting extremists for over thirteen years now, and we are nowhere near finished,” CENTCOM commander says at the Atlantic Council

In a September 10 address to the nation, US President Barack Obama outlined a four-pronged strategy to “degrade and ultimately destroy” the Islamic State of Iraq and al-Sham (ISIS) that included a systematic airstrike campaign, military assistance to the Syrian opposition, and a substantial counterterrorism effort with regional partners and transatlantic allies.

The United States leads a coalition of over thirty partners and allies in a fight with a brutal adversary – one that has a reach that goes far beyond the Middle East.

As part of the Brent Scowcroft Center’s Commander Series and with the support of Saab North America, General Lloyd J. Austin, III joined the Atlantic Council on November 6 to discuss the United States’ major strategic military priorities in the Middle East.

General Austin assumed command of US Central Command in March 2013 after serving as the thirty-third vice chief of staff of the US Army. Throughout his thirty-nine year career, he has commanded at every level. As CENTCOM Commander, General Austin is responsible for twenty countries that make up the Central Region, including Iraq, Syria, and Afghanistan. “It is an area that is often characterized by fragile political transitions, civil wars, sectarianism, and ungoverned spaces,” Austin said. “But it is also an area rich in history, cultural, and tradition… and is one of the most strategically important regions, holding well over half of the world’s proven oil reserves and plentiful natural gas reserves, which are crucial to the global energy market.”

‘This adversary is as good as I’ve ever seen’

Over the past few months, ISIS has wreaked havoc in Iraq and Syria, garnering international attention for not only for their ability to overtake large swaths of territory but also for their brutality; ISIS has executed hundreds of Syrians and Iraqis and has posted videos of the beheadings of Western journalists and aid workers on YouTube.

On June 29, 2014, ISIS leader Al-Baghdadi announced the creation of a caliphate, essentially erasing all state borders and declaring their intent to rule the Muslim world. General Austin credited the current instability in Iraq to “the failure of the government to do the right thing in terms of embracing the Sunni community and the Kurdish community.”

Unlike many terrorist organizations that have preceded it, ISIS has mastered the art of propaganda, often turning to social media to showcase its brutality and tout its ideology. On combatting an enemy so skilled at propaganda, General Austin conceded, “This adversary is as good as I’ve ever seen,” contributing their success to learning the lessons of Iraq and understanding the value of dominating the media space. However, General Austin emphasized his belief that ISIS’s brutality will eventually work against them.

As part of Operation Inherent Resolve, the United States began conducting airstrikes against ISIS on August 8 and expanded the campaign to Syria on September 22. Five Arab partner nations – Saudi Arabia, the United Arab Emirates, Bahrain, and Qatar – and other coalition partners and allies joined the effort.

The strikes began after more than two years of debate within the Obama administration and the American public on whether the United States should intervene militarily in Syria. General Austin framed US actions in Syria as part of a broader campaign: “The actions that we’re taking in Syria, and in particular the airstrikes, are intended to help shape the conditions in Iraq,” he said. “Specifically, they are designed to disrupt ISIL’s command and control and to attrite their forces and to ultimately slow down the flow of reinforcements from Syria into Iraq, and I am confident that we are having the desired effects.”

Austin also confirmed recent US airstrikes against the Khorasan group, an Al Qaeda faction operating in Northwest Syria but denied that strikes were conducted against Jabhat Al Nusra.

Answering a question posed by moderator Jake Tapper on why the United States is focused on Iraq and not on a joint effort in Iraq and Syria, General Austin outlined two positive factors that exist in Iraq that don’t exist in Syria: a new government that General Austin believes will be inclusive of the Sunnis and Kurds going forward; and an Iraqi security force on the ground that the United States can work with, especially as an air and ground effort is critical to being successful, which is absent in Syria.

On civilian casualties, General Austin ensured that every report is investigated but that they have “not seen a lot of reports of collateral damage, and certainly everyone we’ve looked into, we’ve not found any evidence that there was, in fact, unintended consequences which resulted in the loss of [civilian] life.” But General Austin acknowledged that the picture is imperfect: “This is war. I don’t have people on the ground, I don’t have people everywhere… we know that there may have been some things out there that have happened but we’ve not seen the evidence of that that we can sink our teeth into.”

General Austin expressed confidence that the tide is turning against ISIS: “They’re afraid to congregate in any sizable formation because they know if we can see them, we’re going to engage them, and we’re going to hit what we’re aiming at.”