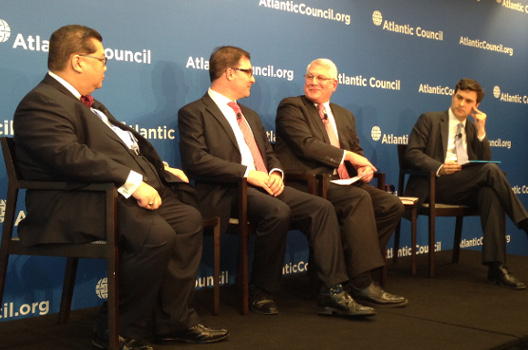 On March 3, the Atlantic Council’s Africa Center hosted an event to mark the release of Senior Fellow Sean McFate’s book, The Modern Mercenary: Private Armies and What They Mean for World Order.

After Africa Center Director J. Peter Pham welcomed attendees, McFate provided an overview of the book, which drew heavily on his background as a former US Army paratrooper and a private military contractor working in Africa.

The use of private military contractors in warfare has exploded in recent years. While even numbers of contractors and US troops were deployed to Iraq, contractors made up 70 percent of the military workers deployed by the United States to Afghanistan. Contractors now suffer the bulk of US casualties in war, and have been used not only in conventional warfare but in peacekeeping, state building and covert operations. The use of “military enterprisers,” as McFate calls them, saves money and permits the waging of long wars that would normally require a civilian draft.

Private Military Companies (PMCs) have subsequently become big business. McFate noted that the United States has spent $366 billion on contractors over the past decade. McFate predicted that as the operations in Iraq and Afghanistan are scaled down, these firms will be driven to find new clients and new sources of revenue – and that these new clients are increasingly likely to be foreign states or even non-state actors, such as mega-corporations and even celebrities. He argued that as private military firms diversify their clients the traditional nation-state monopoly on force will begin to fray, giving way to non-state actors with access to military forces. Understanding the benefits and risks posed by this “second-oldest profession” is therefore critical for policymakers and the general public.

Pham moderated the following discussion, which featured McFate; General Carter Ham, USA (Ret.), Former Commander of US Africa Command; and Mark Mazzetti, National Security Correspondent for the New York Times and author of The Way of the Knife.

Panelists discussed the future of military contracting in light of declining government budgets, ever-changing global security threats, and shifting US priorities. Panelists noted concerns about accountability and transparency in contracting operations, particularly as contractors are increasingly involved in intelligence gathering or may be sought out by nations or actors unfriendly to US interests.