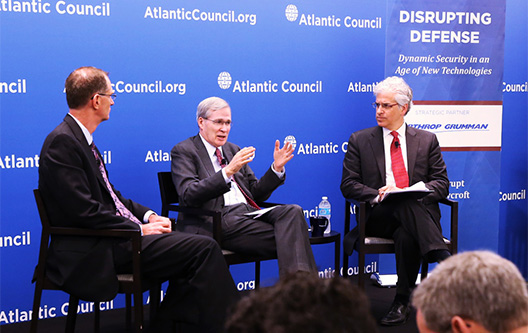 What’s changing, Barry Pavel asked, in this “Westphalia-Plus” world? Stephen Hadley and Jim Miller agreed that the challenges today are not primarily technological, but political. Hadley offered the salient example of Pakistan, where “all the drone strikes in the world” will not solve the problems of a failing state, but rather, only competent government. The problems that the United States faces, they agreed, are far less onerous. Miller emphasized that the United States has the most allies, the biggest economy, and the best universities of any power in the world. All these resources should be sufficient to tackle most any challenge—but only if the political will can be summoned and the political processes overhauled to make that possible.

How can we think about the challenges and possibilities of new technologies? Miller argued that technological change today has a novel set of five attributes, substantially driven by the ubiquity of information systems. The breadth of change is very wide, affecting areas from biotechnology to additive manufacturing. The pace of change is very quick, as developments in those areas are beginning to reflect the effects of Moore’s Law. The rapid and global diffusion of technology is making those developments available and accessible to smaller states. Concealment of impressive technologies is now felt in threats from basement bio-labs to laptop cyber weapons. And all of this is creating new vulnerabilities, in the global infrastructure of finance, communications networks, supply chains, and travel.

Where should efforts be focused? Miller suggested five areas for priority attention. Innovation should extend beyond the technological, into the administrative processes of government. With the globalization of production, military technology should be a matter of co-development amongst allies. In turn, this requires further work on the two-sided problems of export control reform and technology security. The democratization of potentially hazardous technologies will require the establishment of new norms of conduct among states and within the scientific community, where new threats may be first spotted. Finally, building resilience is essential, in the disaggregation of space systems, layering of active defenses in cyber security, and training for military operations with degraded capabilities.

What to do? Hadley offered recommendations in three areas. He strongly advised learning from the example of Silicon Valley, an economic community skilled at “riding the tiger of change” in a way that the federal government simply is not. He recommended much greater development of virtual exchanges between students and thinkers in the United States and abroad, so that common understanding of political problems and technological possibilities can be shared. Hadley also called for fresh thinkers in government; Miller seconded this point by emphasizing efforts in the presidential management fellows program and with term appointments. And both called upon the think tank community to move toward “radical collaboration” and more strategic thinking in support of public service.