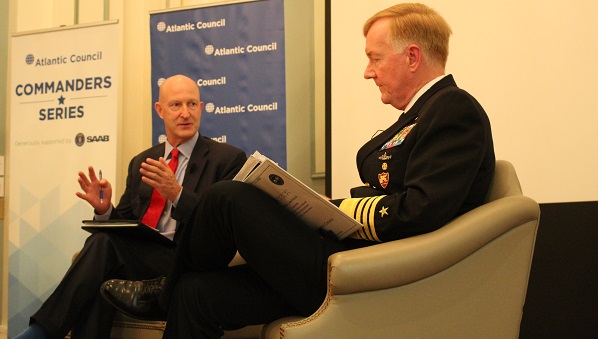 On October 5, 2018, the Atlantic Council’s Transatlantic Security Initiative, part of the Scowcroft Center for Strategy and Security, hosted a public discussion with Admiral James G. Foggo, III, commander, US Naval Forces Europe; US Naval Forces Africa; and Allied Joint Force Command Naples, on NATO’s deterrence posture and Allied efforts to reinforce the maritime domain. The discussion was held at the Army and Navy Club as part of the Scowcroft Center’s Commanders Series, generously supported by Saab. John Belanger, vice president and head of communications at Saab North America gave welcome remarks, followed by an introduction from Frederick Kempe, president and CEO of the Atlantic Council. The discussion was moderated by Ian Brzezinski, senior fellow at the Scowcroft Center.

In his prepared remarks, Admiral Foggo outlined the historical importance of defending the Atlantic, as well as the ocean’s role as the main logistical reinforcement line between the United States and Europe. He emphasized the growing importance of the world’s oceans as avenues of trade and communication and noted both Russia’s irresponsible activities and NATO’s efforts to deter them, citing the struggle as the “Fourth Battle of the Atlantic”.

While previous naval struggles from World War I to the Cold War focused on protecting transatlantic shipping lanes, Admiral Foggo stressed the importance of projecting stability and security throughout the region, from the Arctic, to the Baltic, to the Black Sea. According to Admiral Foggo, Russian naval activity in those regions has become increasingly aggressive. The claiming of territory in the Arctic and the construction of arctic military bases, the deployment of anti-access and area denial weapons systems in Kaliningrad, and restricting freedom of navigation for Ukrainian ships in the Sea of Azov are all examples of this behavior. Admiral Foggo laid out the United States’ and NATO’s response, highlighting the creation of Joint Force Command Norfolk (JFC Norfolk) and the reestablishment of the US Second Fleet, NATO’s expanded exercise posture in both the Baltic and Black Seas, and the upcoming exercise Trident Juncture 2018’s role in deterrence. Importantly, Admiral Foggo stressed Trident Juncture’s emphasis on testing NATO’s logistical capacity, what he called the “sixth domain of warfare.”

Admiral Foggo reiterated that this battle is no longer limited to conventional military realms but has seeped into other domains. With the recent news of Russia’s attempts to hack the Organization for the Prohibition of Chemical Weapons highlighting the importance of cyber defense, he stressed that “if the prelude to war…in cyberspace becomes the actual war itself, then we have to rethink how we’re doing strategy and tactics.”

In the conversation following his remarks, Admiral Foggo discussed the work being done at JFC Norfolk to rethink Allied maritime strategy, NATO’s refusal to limit its exercise of freedom of navigation in international waters, the dangers of over-militarizing the Arctic, and the importance of transparency in military exercises. Admiral Foggo stressed that NATO is undeterred by Russia’s aggressive posture in the region, saying that he is “confident that we are able to act with the high technologically superior capabilities that we have” to address Russian challenges. He emphasized that in both NATO’s military exercises and maneuvers, the Alliance will continue to demonstrate its capacity to reinforce any Ally in an Article 5 scenario, while exercising in a lawful and transparent manner. Admiral Foggo added that NATO should continue to increase defense spending and develop the niche specialties that give the Alliance a technological advantage over any adversary, saying “we can always be stronger.” The event concluded with questions from the audience.