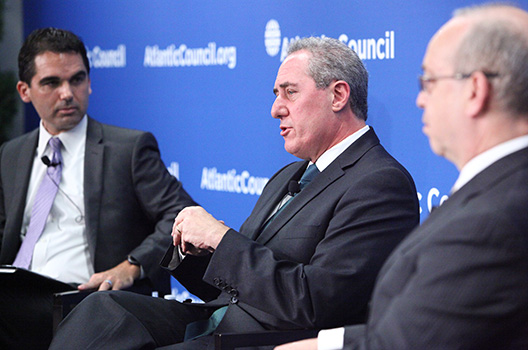 Following introductory remarks by Former US Ambassador to the European Union and Vice Chair of the Atlantic Council Board of Directors C. Boyden Gray, Atlantic Council Chairman Jon M. Huntsman, Jr. addressed the long-standing impact the Trans-Pacific Partnership will have on the United States and on the Pacific region. Governor Huntsman highlighted the deal’s potential to not only strengthen the United States economy, but to cement the US relationship with Asian signatories.

“This game-changing deal that far exceeds the scope of any existing commercial agreement unlocks a host of opportunities for participating countries, raising the bar for trade in areas like transparency, good governance, and labor and environmental protection,” he affirmed.

Ambassador Michael Froman initiated his keynote remarks by stressing the link between the economic and strategic merits of trade. The groundbreaking TPP agreement reduces barriers to exports, raises standards of labor, cuts 18,000 tariffs or taxes on Made-in-America exports, opens markets, reduces subsidies in fisheries, and – for the first time ever – puts forth internet freedom provisions.

“The choice is not between the status quo and TPP. The choice is between TPP and more a statist or mercantilist approach, one in which there are no labor or environmental protections, no emphasis on intellectual property rights enforcements, no discipline on state owned enterprises, no commitment to a free and open internet,” he affirmed.

As the highest standard trade agreement to date, TPP unites twelve countries and 40 percent of the world’s economy. The TPP will also assure that American values and interests are represented in the trading system of tomorrow, strengthening all signatories to tackle the collective challenges seen today and laying the foundation for doing the same in the future.

“The stakes couldn’t be higher,” said Froman. “We are heading into a critical period for this effort. Trade is politically difficult. No agreement is perfect and it is easy to be negative. But at the end of the day, the decision we have to make is whether we are better off with TPP or with the alternative future we are likely to face. Economically and strategically, the choice is clear,” he concluded.

Recognizing the Asia-Pacific region as a driver of economic growth and the United States’ strategic role, Assistant Secretary of State for East Asian and Pacific Affairs Daniel Russel followed with keynote remarks. He highlighted President Obama’s long-standing mission to revamp the economy and rebalance the country’s international engagement.

“The Trans-Pacific Partnership is the economic component and the crown jewel of the rebalance,” he said. “It anchors us to a region that is vital to our security and our national well-being. And it is received in the region as a proof point that America will continue to lead, that we are in the Asia-Pacific region to stay.”

With the conclusion of remarks, the speakers engaged in a conversation about the economic and geo-strategic implications of TPP, moderated by Jason Marczak, Deputy Director of the Adrienne Arsht Latin America Center. Asked to elaborate on the new standards and enforcement mechanisms, USTR Michael Froman highlighted strong prohibitions on forced labor and child labor, as well as requirements on multilateral environmental regimes and the conservation chapter for protection of wildlife and sensitive ecosystems.

Assistant Secretary Russel reaffirmed that the principles that embody TPP reflect the priorities of the countries in the region. “They want in on a network that drives innovation and promotes transparency. Freedom, justice – these aren’t words or principles that are in the custody of human rights activists. They are what drives people to succeed,” he stated.

Looking toward the US pivot to Asia and the relationship with China, Russel emphasized the deal is in no way anti-China. He noted the cycle of greater regulatory practices and openness are motivators for non-TPP signatories, including China. The deal has altered China’s perceptions over time and the high standard provisions have piqued the interest of other nations, who have expressed a desire to join the Trans-Pacific Partnership.

“By lowering the barriers and by broadening lateral trade ties among the twelve, it creates a community of interest that promotes beyond their own borders the principles of open trade, and pushes back the drive towards protectionism and mercantilism policies. [TPP] has created positive motivation beyond the trade field, in other areas, more fundamentally on human rights and civil rights.”

Ambassador Froman concluded by recognizing and responding to criticisms of the agreement and addressing the road ahead for TPP. Although not a perfect agreement, USTR Froman affirmed that TPP will receive bipartisan support, especially when compared to the status quo and the alternative reality across the region.

“Our view, the President’s view, is that globalization is a force. It’s a reality. And trade agreements are how you shape globalization, make it reflect your interests, raise standards abroad, and level the playing field. We can’t wish globalization away. We can’t sit on the sidelines and expect things to change. We have to show leadership, tear down these barriers, and that gives our workers and our firms the best chance to compete in the global economy.”