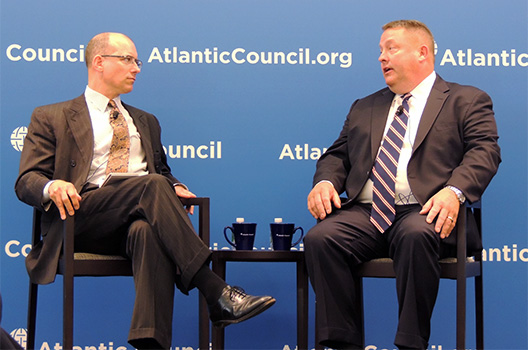 Steven. F. Gaffney, chairman and CEO of DynCorp International, gave an address entitled “The Role of Service Contractors in the United States and Around the World” as part of the Atlantic Council Captains of Industry series.

Service contractors provide mission-critical capabilities and resources to help the United States in its war effort. To help in the fight, service contractors go on location in places like Iraq and Afghanistan. Unfortunately, while serving in that capacity, some of them “paid the ultimate price” with their lives. According to Gaffney, seventy-one DynCorp employees died while serving abroad alongside the uniformed services of the United States. In order to memorialize their exemplary service, Gaffney gave his address at the Council two days before the Memorial Day weekend. “On Memorial Day,” said Gaffney, “I will be thinking about the men and women in uniform and the contractors that gave it their all.”