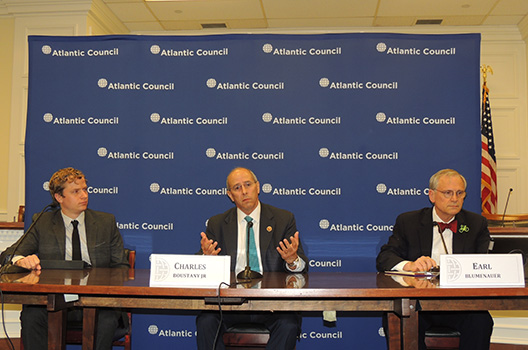 
Congressmen Earl Blumenauer started the discussion, focusing on the environmental issues at stake in the Asian-Pacific region and the moral and geostrategic importance of Vietnam in regards to free trade. In advocating the need to avoid misinformation, Congressman Blumenauer stressed the important conversations that he argued needed to occur not only within Congress but also with members of the private sector. Blumenauer warned that the improper completion of the TPP would be costly while at the same time recognizing the benefits of a properly completed trade agreement.

Congressman Boustany stressed the importance of the TPP for American economic growth in the face of slow European growth. He further contended that the TPP was of strategic significance given its integral role in creating a global rules-based trading system for the twenty-first century. Bosutany also advocated the need for a robust agreement that incorporated other nations and established American economic leadership within the region. Employing a regional perspective, he highlighted the importance of all twelve members in making the agreement a reality. Congressman Boustany also advocated for the need to engage China in productive mutually beneficial dialogue on all levels. With regard to an Asian security strategy, Boustany underlined the significance of the TPP as a first step toward creating a stable globally applicable trading system.

The Cross-Straits Series looks broadly at major security and economic issues impacting the strategic landscape in the Asia-Pacific and how they will affect the US-China-Taiwan trilateral relationship. Past topics of discussion include growing Asian defense spending, the anniversary of the Taiwan Relations Act, celebrated on Capitol Hill with House Foreign Affairs Committee Chairman Ed Royce, the challenge of Chinese cyberattacks and espionage, and the impact of nationalism on security in East Asia.

To that end, the congressmen called for passage of trade promotion authority (TPA) to help conclude the negotiations on the trade pact. The congressmen also spoke in favor of reauthorizing the Export-Import Bank.

Boustany, who chairs the House Ways and Means Committee’s Subcommittee on Oversight, said that economic integration in the Asia-Pacific region would help lower political tensions, and he called the TPP the best way for the U.S. to exert soft power in the region as part of the Obama administration’s “rebalance” toward Asia.

TPA, or fast-track negotiation authority, would expedite congressional consideration of trade legislation by requiring an up-or-down vote on a negotiated text. The last fast-track authority expired in 2007, and bills have been introduced in the Senate (S. 1900) and House (H.R. 3830) to renew it .

Blumenauer said that a trade deal like the TPP can serve as a mechanism for the U.S. to pursue other interests in the region. For example, it can serve as leverage to convince other parties, such as Japan, to put in place new fisheries sustainability practices, he said. Or it could be used to push countries to implement sounder forestry practices, which would protect the U.S. logging industry but also support indigenous peoples and further environmental goals, he said.

Both congressmen said that it is important for the Congress to pass TPA legislation if the TPP negotiations are to move forward. Boustany said that the president must expend more political capital to move the legislation through Congress, including mobilizing cabinet agencies such as the departments of State, Agriculture, Treasury and Commerce.

Boustany said that the window to pass TPA is small, as politicking will make passage before the November midterm elections unlikely, and the presidential campaign season will gear up quickly in 2015 (70 DER A-28, 4/11/14).

The congressmen disagreed about whether President Obama’s failure to secure Japanese agricultural concessions on the TPP during his recent trip to Asia could be blamed on a lack of TPA (81 DER A-12, 4/28/14). Boustany said that TPA would have shown Tokyo that the full force of the U.S. government was committed to successfully concluding negotiations, but Blumenauer laid the blame on Japan’s powerful agricultural lobby.

The congressmen also expressed their support for the reauthorization of the U.S.’s Export-Import Bank. The trade financing organization’s charter expires in September, but House Republicans are divided on the issue of renewal (118 DER A-38, 6/19/14).

Blumenauer said that the U.S. needs the bank to compete with other countries that have similar export promotion mechanisms. Boustany added that export financing is needed to help small U.S. companies integrate into global supply chains.