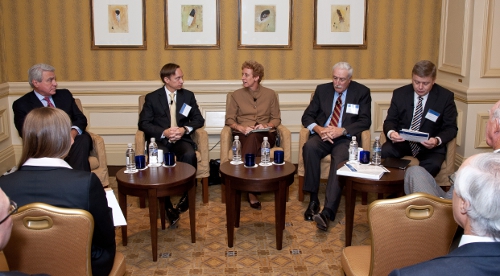 Summary of the master class “Doing Business in a Volatile World: The US and European Debt Crises” at the 2011 Annual Members’ Conference.

The panel, entitled “Doing Business in a Volatile World: The US and European Debt Crises,” brought together key transatlantic business leaders to take stock of the impacts today’s volatile economy is having on business, and featured Atlantic Council Board Directors Mikael Hagström, Executive Vice President of SAS; Ambassador Philip Lader, Non-Executive Chairman, WPP; Sean O’Keefe, CEO of EADS North America; and Maciej Witucki, CEO of Polish Telecom. Atlantic Council Vice President Frances Burwell moderated the discussion which focused heavily on the opportunities and opportunity costs facing the private sector as leaders on both sides of the Atlantic struggle to come to terms with the ongoing economic crisis.

Three points quickly became evident over the course of the discussion on returning the global economy to growth and restoring confidence to the markets:

In the aftermath of the collapse of Lehman Brothers in 2008, the United States and Europe worked quickly together with the emerging markets to rapidly and overwhelming intervene in the financial markets to restore investor confidence, thus preventing a complete economic collapse. A similar global effort needs to take place now to definitively end the ongoing sovereign debt crisis in Europe.

As in the past, Europe can and should use this crisis to advance its integration agenda. The European Union should take this Euro crisis, which threatens the entire European project, as a moment to finally integrate its disparate fiscal policies to go along with its monetary union. Rather than simply kicking the can down the road with insufficient relief packages troubled countries, European leaders need to act quickly and decisively to restore confidence in their ability to lead, as well as their ability to manage crises.

Problems are, of course, not limited to Europe. While the S&P downgrade of US Treasuries has not had a measurable impact on the markets–or even the yields on treasury bonds–the negative impact on the image of the United States to investors should not be underestimated. Similarly, our dysfunctional political system is exacerbating the problem, as the two parties refuse to cooperate and work together to implement serious economic reforms to aid the recovery. This needs to change, preferably starting with a positive outcome from the debt reduction super committee meetings on Capitol Hill.

Once consumers and the markets are convinced in the fiscal solvency of both sovereign states and the banks that finance them, the private sector will begin investing its record amounts of cash on hand. This will spark not only a stock market recovery, but will have a real impact on the unacceptably high unemployment levels on either side of the Atlantic.

Ultimately, the panel concluded with a positive outlook for the long-term future of the transatlantic economic space. The US and Europe still hold positions of strength in terms of encouraging innovation and developing new technologies. Even now there are many opportunities for smart and proactive investors to create wealth. Finally, given the right signals from government—in terms of regulatory assurance and investments in infrastructure and technology—the transatlantic economy can and will thrive again.