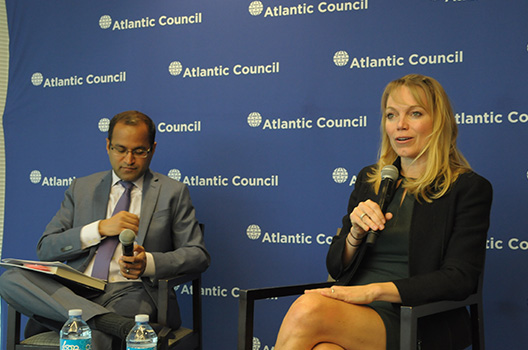 On May 17th, the Brent Scowcroft Center for International Security and the South Asia Center co-hosted Anja Manuel, Co-Founder and Managing Partner of the RiceHadleyGates LLC, for a discussion on her new book, “This Brave New World: India, China, and the United States.”

In the book, Manuel discusses the implications for the world order given the fact that in the next decade and a half, China and India will become two of the world’s indispensable powers. With growing markets and increased engagement in international affairs, China and India are soon to be hosts to the world’s largest middle classes, and key partners in solving global problems such as climate change and nuclear security. Given this emerging prominence, and in light of the Obama administrations pivot to Asia strategy, Manuel outlined key challenges that India and China will have to address, including issues relating to environmental degradation, demographic shifts, income inequality, and their role in international institutions. The discussion focused on how India and China view themselves in the region, and how the US can effectively work with both in order to pursue its economic, political, and global interests. Specifically, Manuel suggested that the US role in Asia ought to be defined by a closer relationship with India, and with every effort made to avoid antagonizing China, with whom the United States does so much business. Manuel spoke candidly about the different perspectives of all three players, and maintained that engagement in Asia should be a top-priority for the next administration for the United State to extend its leadership in the world.