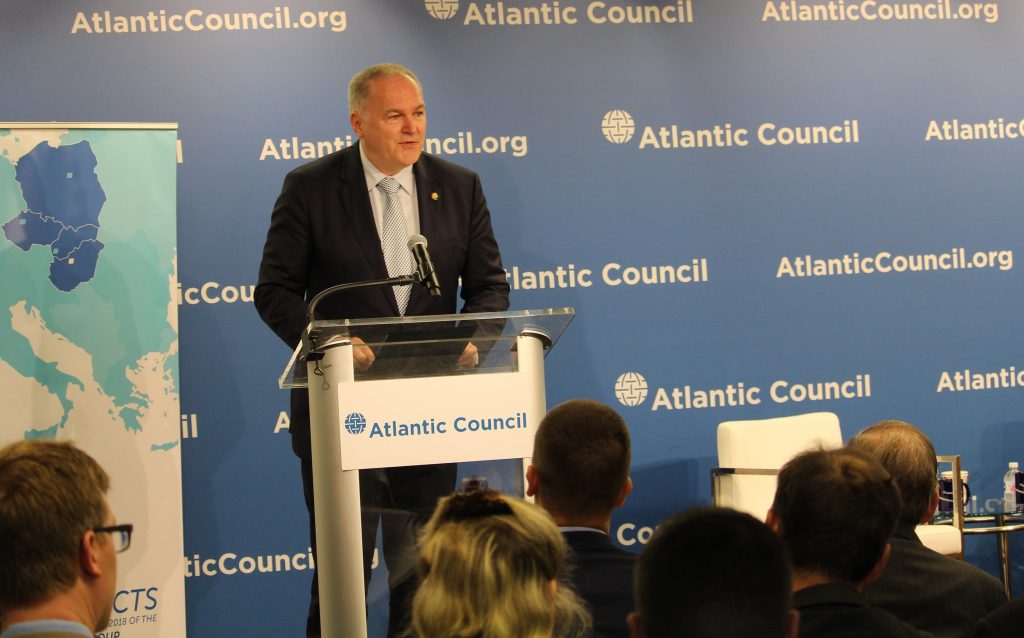 H.E. László Szabó Ambassador of Hungary to the United States and Representative of the Presidency of the Visegrad Group, gives welcome remarks at the "Towards 21st Century Energy Systems in Central & Eastern Europe" conference.

On June 25th, the Atlantic Council’s Global Energy Center held a half-day conference on “Towards 21st Century Energy Systems in Central & Eastern Europe,” which brought together government officials, business leaders, and experts to discuss the progression of the European Energy Union concept, the implications of the changing global liquefied natural gas (LNG) market, and the priorities of the Trump administration for Central and Eastern European energy security. It was the fourth annual edition of the conference.

From left to right: Amb. Richard Morningstar and Maroš Šefčovič.

During the first session, “Towards 21st Century Energy Systems in Central & Eastern Europe,” Amb. Richard Morningstar, founding chairman of the Global Energy Center at the Atlantic Council, and Maroš Šefčovič, vice president of the European Commission for Energy Union, discussed the progress of the Energy Union, the improvement of North-West connections, the relevance of the Three-Seas Initiative, and additional issues such as Nord Stream 2, the Gas Directive, and the Trans Adriatic Pipeline. Mr. Šefčovič described the European Commission’s efforts to ensure continued transit through Ukraine, outlined the political support for the amendment, and reaffirmed the importance of the United States as an ally in European energy security and other areas. He concluded by stating the need for a stronger Europe with geostrategic sovereignty.

Global Energy Center Senior Fellow for Energy Diplomacy David Koranyi moderated a panel on “The Impact of the US’ Energy Agenda on Central and Eastern Europe.” H.E. Vaclav Bartuska, ambassador-at-large for energy security representing the Czech Republic, stated that Nord Stream 2 can only be halted by US sanctions and doubted the success of the amendment to the Gas Directive. Barbara Dorić, managing director of Croatia LNG, described the progress on the LNG terminal on Krk Island, while Tellurian’s Anita Orbán gave an optimistic outlook of the future LNG market. Amb. Dusan Matulay, director general of the economic cooperation section of the Slovak Republic’s Ministry of Foreign and European Affairs, highlighted the Slovak Republic’s willingness to be a constructive contributor to the Energy Union. Sandra Oudkirk, deputy assistant secretary for energy diplomacy at the US Department of State, first described the impact of the LNG revolution on the US energy market, then focused on US opposition to Nord Stream 2 and TurkStream before outlining US support for both the Southern Gas Corridor and Central and Eastern European states’ push for more interconnectors. H.E. Pál Ságvári, Hungary’s ambassador-at-large for energy security, first laid out the Hungarian priorities during its Visegrád presidency, such as the North-South Corridor and Romania’s offshore projects in the Black Sea, before explaining Hungary’s complicated energy security environment.

Global Energy Center Senior Fellow Melanie Kenderdine moderated the third panel of the day, focusing on innovation in Central and Eastern European energy systems. Andrea Lockwood, deputy assistant secretary for Africa, Middle East, Europe & Eurasia at the US Department of State, highlighted the importance of innovation to achieve both Europe’s emissions targets and energy security goals. Marcin Roszkowski, president of the Jagiellonian Institute, described the predicament Poland faces because of its continued reliance on coal, as well as the difficulties of transitioning to a more progressive energy sector. Agnes Töröcsik, program director at the REKK Foundation, noted that in Hungary and the surrounding region, there has still not been significant solar power penetration, and that, even with the rise of renewable energy, there will still be a need for intermittent power. All panelists agreed on the vital role that cybersecurity will play in energy systems going forward, with Lockwood describing cybersecurity as the biggest threat to both energy security and national security for the US.

From left to right: Richard Morningstar and John Roberts.

The final element of the program was a conversation about the Southern Gas Corridor between Amb. Richard Morningstar, founding chairman of the Atlantic Council Global Energy Center, and Global Energy Center Senior Fellow John Roberts. Morningstar and Roberts discussed the Trans Adriatic Pipeline (TAP) and the potential political hurdles for the final part of the pipeline’s completion, given the recent elections in Italy. They also discussed potential outcomes if the pipeline is not completed in Italy, including the possibilities of a new branch through the Balkans and the pipeline being contracted out to a third-party source. Roberts stated he believed there is a 60 percent chance that an agreement to complete the TAP is reached and a 40 percent chance of no agreement.

Read more on the Southern Gas Corridor in John Roberts’ blog post, “The Irony of Italy’s Election for Energy,” here.