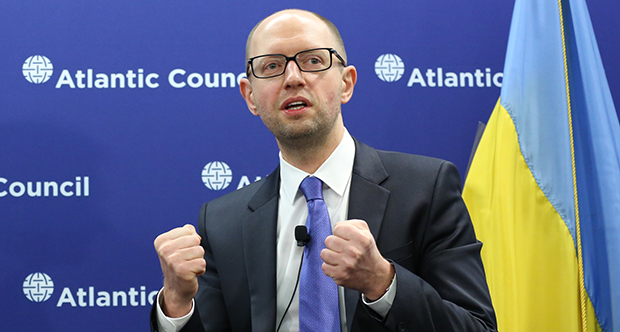 Ukraine’s Prime Minister Arseniy Yatsenyuk offered to negotiate an “equal partnership” with Russia if it ends its invasion of Crimea, and praised the Western response to the crisis following his talks today at the White House.

“I would like to reiterate that we still want to have a free, equal partnership… with Russia. And we can’t do [that] having a military incursion,” Yatsenyuk said at the Atlantic Council. “The best strategy is to sit and to negotiate. … The best approach for Russia is just to stop, and calm down.”

In his only public address during his Washington visit, Yatsenyuk underscored that Ukraine is determined to recover Crimea, but said it will not try to do so militarily. He accused Russia of invading Crimea on “artificial grounds” of protecting Russian-speaking minorities. “I was absolutely astonished with this,” he said. “My wife speaks Russian. She doesn’t need any kind of protection.”

Yatsenyuk noted that the new government vetoed a bill that would have downgraded the status of Russian as a minority language in Ukraine.  “We, as a new Ukrainian government, will preserve the rights of all minorities,” including ethnic Russians, he told the audience of diplomats, policymakers, and journalists.

The Crimea crisis has serious implications for global security, notably in nuclear nonproliferation, Yatsenyuk said. In 1994, “we abandoned our nuclear weapons” in exchange for a guarantee of Ukraine’s security and territorial integrity, he said. “And look what has happened. … if we don’t get this protection, tell me … how the world is to ask other countries to stop their nuclear programs.  It’s impossible.”

Yatsenyuk: If we don’t get protection how could we expect other countries to give up nuclear weapons? #ACUkraine #Ukraine #Russia


On his meetings with President Obama, Yatsenyuk said, “It was a very frank and open discussion,” adding, “It is great to have the EU and the US speaking in one voice… I see the Western world is determined to preserve Ukrainian integrity and to preserve Ukrainian independence.” The US offer of $1 billion in financial help is a “key factor” in gathering the international assistance Ukraine needs to navigate its economic and debt crises, he said.

Ukrainian PM @Yatsenyuk_AP says biggest disaster of this century would be the restoration of the Soviet Union. @AtlanticCouncil #ACUkraine


Alongside his offer to rebuild a partnership with Russia, Yatsenyuk stressed that Russia’s invasions of its neighbors in recent years delivers a message that their only recourse to achieve security may be to move closer to NATO. He invoked the “membership action plans” (MAP) that the Alliance has created to prepare candidate countries to become allies.  As a neighbor of Russia, he said, “If you don’t have MAP, you have something else – like military aggression. This is the dramatic lesson for all of us,” he said.