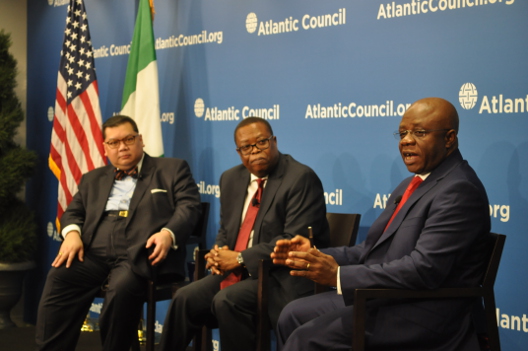 Amid the most hotly-contested elections since Nigeria’s 1999 transition back to civilian rule, the West African country’s military has gone on the offensive against Boko Haram, an Islamist terror group that until very recently controlled a chunk of territory across three northeastern states equivalent to the size of Belgium. A regional military force, catalyzed in part by Nigeria’s six-week election postponement, has had initial success in rolling back Boko Haram’s gains.

On Wednesday, March 11, the Atlantic Council’s Africa Center welcomed Ambassador Ayodele Oke, Director-General of the National Intelligence Agency of the Federal Republic of Nigeria, and Rear Admiral Gabriel E. Okoi, Chief of Defence Intelligence of the Federal Republic of Nigeria, to provide an update on the current security situation in Nigeria in light of the rescheduled March 28 elections.

Africa Center Director J. Peter Pham welcomed participants and noted that the campaign by Nigerian forces and their regional allies has succeeded in liberating a number of major towns, even as Boko Haram’s leader pledged the group’s allegiance to the so-called Islamic State in Syria and Iraq (ISIS) just days ago. He also highlighted the Africa Center’s role several years ago as one of the first institutions in Washington to raise awareness of the increasing threat posed by Boko Haram.

Despite ongoing security threats from Boko Haram and the potential for election-related violence, Oke affirmed the government’s intention to hold elections as scheduled on March 28, and described the May deadline for the seating of a new government—which would be nearly impossible to meet should the elections be postponed again—as “sacrosanct.”

At its height, Boko Haram occupied fourteen local government areas, what Oke called a “virtual state of war.” Of concern most recently is Boko Haram’s announcement over the weekend of its new allegiance to ISIS. The government reports that it has retaken ten of those territories, and Oke asserted that there has been a clear shift in the public’s confidence in the government’s ability to provide security: displaced persons are returning to their homes, businesses are reopening, and government authority is being re-established throughout former Boko Haram strongholds.

Oke ended his remarks by stressing the importance of continued regional cooperation in countering Boko Haram. “Terrorists do not respect national boundaries,” he said.

In his remarks, Okoi reiterated Oke’s point that Boko Haram is no longer solely a Nigerian phenomenon: Cameroon, Chad, and Niger are also affected.

Okoi described the areas of three northeastern states—Borno, Adamawa, and Yobe—which were formerly under Boko Haram control and affirmed that, since the election postponement, major swathes of territory have been reconquered by the Nigerian military. He used maps to detail the situation on the ground as of two days ago.

A question and answer session followed Oke and Okoi’s opening remarks. Topics included the state of intelligence sharing in US-Nigeria relations, the broader Nigerian counterterrorism strategy, the role of corruption in maintaining a battle-ready military, and the impact of the election and campaigning on the media’s coverage of anti-Boko Haram operations.

Also attending the event and joining in the discussion were H.E. Professor Adebowale Adefuye, Ambassador of the Federal Republic of Nigeria to the United States; the Honorable George Moose, Atlantic Council Executive Committee member, US Institute of Peace Vice Chairman, and former US Assistant Secretary of State for African Affairs; and the Honorable John Campbell, former US Ambassador to Nigeria.