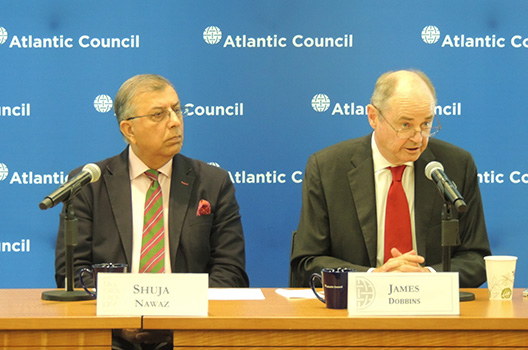 As Afghanistan undergoes a critical stage of its political transition, Special Representative to Afghanistan and Pakistan James Dobbins visited the Atlantic Council on July 11 to provide an off-the-record analysis of the current impasse over the country’s election results. The dispute over the results between the two candidates, Abdullah Abdullah and Ashraf Ghani, stems from Abdullah’s accusation that Ghani collaborated with incumbent President Hamid Karzai and and the Independent Electoral Commission to rig the election against him. The controversy threatens to destabilize Afghanistan at a critical time when NATO and ISAF forces are entering the final phase of their withdrawal from the country and Afghans are expected to take full responsibility for their own security and governance. Not only are the developments of the coming weeks and months expected to have a decisive impact on Afghanistan’s political future, but they could also have significant ramifications for US policy there.

Dobbins’ visit to the Atlantic Council occurred while Secretary of State John Kerry played a mediating role between the political campaigns of Ghani and Abdullah ahead of the release of the final results on July 22. A new president is supposed to be sworn into office on August 2. If the dispute over fraudulent ballots is not resolved in the coming weeks, the legitimacy of this process could easily be negated by the reemergence of ethnic tensions and political polarization. Dobbins’ analysis underscored the importance of the current phase of the Afghan transition, in which the gains of NATO’s mission (the International Security Assistance Force, or ISAF) could be either squandered or consolidated depending on the outcome of the ongoing electoral crisis.

Participants in the discussion posed numerous questions on various aspects of the dispute and its implications for US policy in Afghanistan, including, the nature of the fraud controversy itself; the viability of the electoral schedule; potential for power-sharing arrangements; the future of the US presence in Afghanistan; and the roles of the Afghan National Security Forces, the insurgency, and Afghanistan’s neighbors as the electoral row unfolds. Dobbins’ elaborated on these topics, and participants praised him for his services as the outgoing special representative to Afghanistan and Pakistan.

Image: US Ambassador James Dobbins, at right, briefed members and guests of the Atlantic Council July 11 on the crisis over the presidential election in Afghanistan. The presentation by Dobbins, the US special representative for Afghanistan and Pakistan, was moderated by the director of the Atlantic Council’s South Asia Center, Shuja Nawaz, at left.