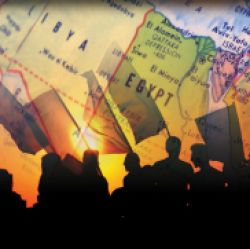 After Arab popular uprisings in 2011 pushed long-serving autocrats from power in Egypt, Libya, Tunisia, and Yemen, the United States, and European nations pledged significant support to promote successful democratic transitions, economic stabilization, and reform. A new Atlantic Council report, US and EU: Lack of Strategic Vision, Frustrated Efforts Toward the Arab Transitions, outlines how the United States and the European Union (EU) have fallen short in assisting the transition countries, what can be improved, and why a joint US-European strategic approach is important not only for the region but also for the long-term interests of the transatlantic partners.

On September 25, the report authors—Danya Greenfield, Amy Hawthorne, and Rosa Balfour—presented their findings, and Elizabeth Richard, the new coordinator for assistance for the Near East at the US Department of State offered commentary. Ms. Hawthorne emphasized the widening gap between the often lofty rhetoric of key officials and the reality of implementation. Dr. Balfour cautioned that in the EU, mirroring developments in the United States, the security agenda is overtaking the democracy agenda. Ms. Richard stressed that the political commitment among key officials to aid transitional countries remains fully intact despite operational obstacles, and observers should not conclude from short-term setbacks any abandonment of long-term goals.