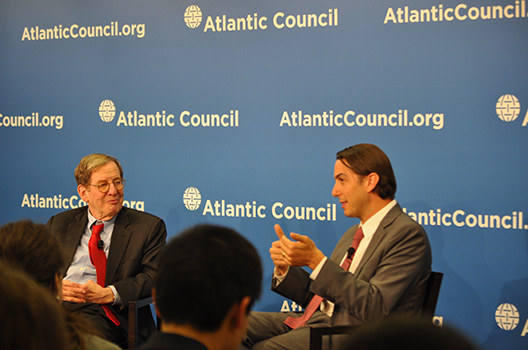 The new year will be characterized by “nonstop energy drama”, but with great potential for economic opportunity.

After having experienced a great deal of international events due to gas and oil needs and security, 2015 will also have its share of energy issues. This international approach is being embraced by the Atlantic Council, as its Global Energy Center aims to address issues outside of Europe alone. The Council hopes to address three main topics with the center through addressing global energy security needs, fusing effective governance with a focus on sustainability and addressing climate change, and building strategic foresight with energy needs in mind.

Mr. Amos Hochstein, Special Envoy and Coordinator for International Energy Affairs of the US Department of State, stressed that the current price of oil was an event that no one saw coming. The change in price, however, will not affect a number of US commitments. For instance, the United States still desires to bolster cooperation and energy coordination with Latin America and the Caribbean. This would help to build more sustainable economic and energy markets and would help create “the fundamental change in the regulatory environment that allows for investment in the Caribbean.” Europe needs to continue securing its energy security, especially after witnessing the actions of Russia in the past year. This can be achieved through the “closer collaboration between the United States and the European Union” and work together to create stability. In the Middle East, the Eastern Mediterranean is key in providing an opportunity for the region to stabilize and become prosperous. Players in the Middle East need to work out their problems, with the recent Israeli-Jordanian cooperation being a good example. Small changes in corners of the Middle East can lead to profound changes with time. Hochstein mentioned that Africa “has so much potential and such an increase in demand and a truly global effort” to create sustainable energy and economic opportunity. International agencies and governments need to consolidate their efforts to avoid past mistakes and gaps in funding. Democratization has positively affected many oil producers in Africa and provide great promise. Mr. Hochstein stated that “it is inherently in our interest” to focus on Asia, since it is the catalyst for global growth, being the main source of the world’s energy demand. There is a need to cut emissions and natural gas will be the most viable fuel in the mid-term, with the long-term focusing on renewables. Asia needs to integrate, be more open to the market, and each other for meaningful progress though.

The key point of the discussion was when Mr. Hochstein described the challenge facing the entire world and its use of energy. With all the optimism for growth, he stated that “the one thing that stands between us and a lot of these issues, is the use of energy not as a tool of opportunity as I just described, but as a weapon.” The Islamic State of Iraq and al-Sham and Iran are major points of contention in this regard, in addition to there being the potential for face offs in the exploration of new sources of energy offshore.

The US Energy Diplomacy Priorities 2015 event with Amos Hochstein was hosted by the Global Energy Center on January 8, 2015.