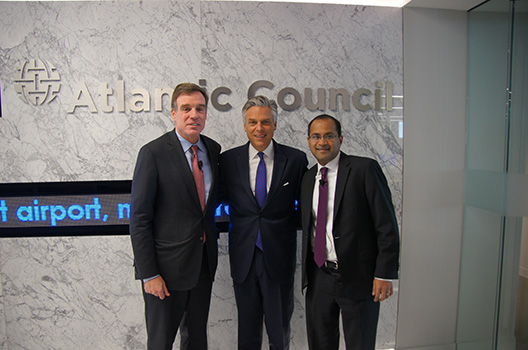 On January 16, the South Asia Center hosted Senator Mark R Warner (D-VA) at the Atlantic Council. After an introduction by Governor Jon Huntsman, the Senator spoke about US-India ties in light of President Obama’s upcoming trip to India to attend the Republic Day celebration. He highlighted the achievements the two nations have made in improving relations with one other in terms of trade, security, and a host of other facets. With Senator Warner’s leadership, the India Senate Caucus managed to convince Prime Minister Modi that its recommendations ought to be adopted in the new government’s plans. Despite there being several positives in the bilateral relationship, the Senator shed light on some of the irritants and offered suggestions on how to remove these obstacles. He also spoke on defense trade with India and how significant announcements related to it could be expected during the President’s trip.