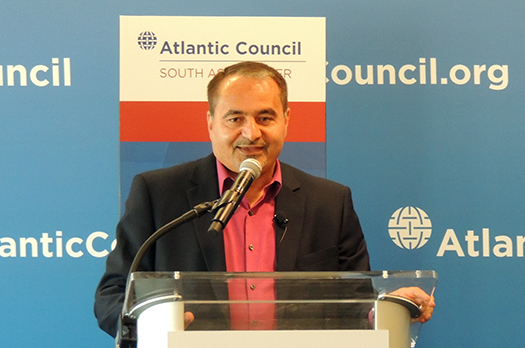 Lessons can be learned from 30 years of mistrust, misperception, and misconception that has persisted between the United States and Iran. While rapprochement is far from inevitable, Seyed Hossein Mousavian, diplomat and author, outlined the path to success for current negotiations while speaking at a South Asia Center panel. Mousavian argued that, rather than focusing on the nuclear dimension alone, the United States and Iran must complement negotiations with extensive unilateral dialogue on all outstanding issues, including human rights, terrorism, and regional cooperation. However, the underlying key to rapprochement is simply “to reciprocate goodwill with goodwill.” Fellow panelist John Marks, founder and president of Search for Common Ground, urged the need for significant people-to-people diplomacy for the two nations to reconcile with the past and enable alternative solutions. “To pursue a better future, we must face the past—understanding differences & acting on commonalities.”

“Without Iran, you would have never dismantled Syria’s chemical weapons,” said Mousavian, citing an example of how the United States and Iran can cooperate at the highest levels to solve the most challenging regional issues of the day. Emphasizing Iran’s role as a predominant regional actor and the United States’ role as a preeminent international actor, both nations ought to make up for the multitude of missed opportunities –most notably the lack of cooperation in Afghanistan. Mousavian emphatically endorsed the idea that Iranian Americans are a unique asset capable of shifting the tide in favor of rapprochement due to their ethnic links to Iran and cultural affinity to both nations. Alternatively, Marks suggests that the best way to eradicate, if not reduce, the fog of misperception is via “the exchange of technical expertise and scientific insights that can promote alternative solutions.”

Both speakers agreed that the two states stand on the brink of progress on the nuclear conflict. Peace on this issue alone, however, would be temporary and unstable if other sources of mistrust are ignored. For that reason, any resolution on the nuclear front “should be regarded as the foundation for greater cooperation or a grand bargain between the two states.” The Iranian-American relationship does not have to be a zero-sum game. “Peace between Iran as a regional power and the United States as a global power could lead to the creation of a framework for cooperation that would bring stability to the Middle East, from Lebanon in the west to Afghanistan in the east.”