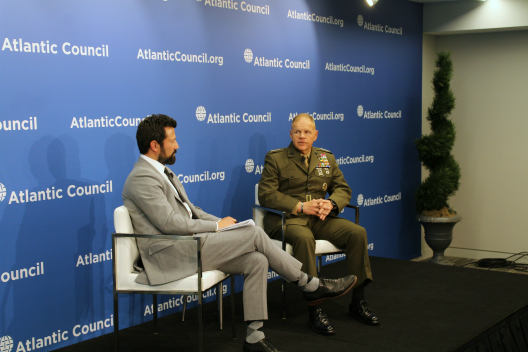 General Robert Neller, Commandant of the US Marine Corps, speaks with moderator Kevin Baron during a Commanders Series event at the Atlantic Council.

On March 29, the Atlantic Council hosted Commandant of the Marine Corps General Robert B. Neller for a strategic look at the US Marine Corps. The event featured a moderated discussion led by Kevin Baron, Executive Editor of Defense One.

The event was a part of the Commanders Series, which is the Atlantic Council’s flagship speakers’ forum for senior military leaders. The series provides a platform to discuss current strategic issues with an impressive audience drawn from across Washington’s policy community, including think tanks, media, industry, embassies, and the US government. Gen Neller discussed issues concerning the strategic environment of the US military. He evaluated US military involvement in Afghanistan and Iraq and discussed the fight against ISIS, adaptation to new technologies in warfare such as drone swarms, and the increased budget for the military in FY2019.

Gen Neller is the 37th Commandant of the United States Marine Corps. Previously, he served as the Commander, Marine Forces Command from July 2014 to September 2015 and Commander, Marine Forces Central Command from September 2012 to June 2014. He has also served as an infantry officer at all levels, including command of Marine Security Force Company Panama during Operations JUST CAUSE and PROMOTE LIBERTY; 3d Light Armored Infantry Battalion during Operation RESTORE HOPE; 6th Marine Regiment; and 3d Marine Division. Gen Neller held a position of Deputy Commanding General, I Marine Expeditionary Force (Forward) during Operation IRAQI FREEDOM (05-07); Assistant Division Commander for 1st and 2d Marine Divisions; and President of Marine Corps University. His Joint assignments include service in the Policy Division of Supreme Headquarters Allied Powers Europe (SHAPE) in Casteau, Belgium, and as the Director of Operations (J-3) of the Joint Staff in Washington, DC.