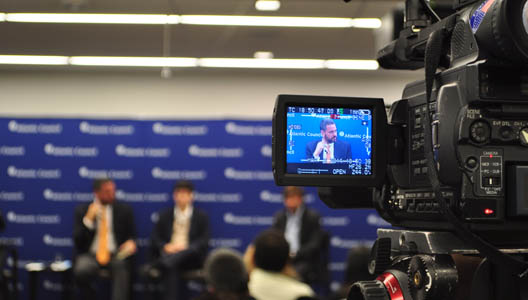 Since the beginning of late Hugo Chávez’s administration in 1998, the once stable democratic government in Venezuela has been consistently damaged by political repression, lack of strong freedom of expression, institutional ineffectiveness, and constant human right abuses that have left many calls for justice unanswered. Recently, internal turmoil in the country has elevated political divisions and clashes to a new level.

The present government of Nicolás Maduro, Chávez’s successor after his death in 2013, has strongly repressed opposition protests nationwide, driven the economy to dangerous levels (inflation rates higher than 55 percent), and spearheaded a direct attack against any national media that opposes the present government. Student protests around the nation have clashed with police forces, a process that has left more than eighteen dead since February 9th.  With the difficult situation in mind, members of the opposition are calling attention to three important issues:

Note: This event was held in Spanish.

Armando Briquet, former presidential campaign manager for opposition presidential candidate Henrique Capriles Randonski, stressed that the government is denying the Venezuelan people’s right to protest and the basic human rights of protesters nationwide. As a consequence, people have actively taken to the streets to protest maladies that have become normal in Venezuelan society: high crime levels, food shortages, lack of a coherent economic fiscal policy, and many more.  According to Briquet, the government is worsening citizens’ quality of life in which the normal Venezuelan cannot thrive, feels oppressed, and consequently chooses to leave the country to find better possibilities.

Juan Andrés Mejía, national board member of Voluntad Popular, shared his thoughts on the ongoing oppression. First, there is a quasi-total lack of freedom of expression. Most media channels are either owned or controlled by the government, hence the opposition has been suffocated when trying to share a message of change. In addition, the national police lacks institutional effectiveness. For instance, many university students denounce that police forces fail to protect people from crime and hardship, but seemingly they perform above standard when suppressing street demonstrations. Mejía asks, why are the streets the main center of dialogue and public demonstrations? Why does the opposition not instead try to find an arbitrator that could lead the discussion between the opposition and the government? Mejía stressed that government institutions are too biased and as a consequence have stopped being proper spaces for open discussion in the country.

In Venezuela, most of the protesters are students, and many social organizations promoting a change of government are led by young members. Roberto Patiño, president and cofounder of Votojoven, discussed the active role that young Venezuelans are taking. Students have demanded concrete and direct actions to the government in order to start peace deliberations on several issues, he explained: justice and an end to human right violations, specific solutions for the economic and security problems, and complete transparency within national institutions.

At the end of the discussion, all of the speakers called upon other governments globally to protect human rights standards throughout the region, especially in Venezuela. Roberto Patiño emphasized the strong support that citizens across Latin America have given to the opposition, as well as the need for those countries’ leaders to speak out directly about Venezuela’s situation. Mejía declared that the opposition does not want any international government or institution to intervene or try to solve Venezuela’s problems; rather, other governments should support the protection of human rights in Venezuela, and more broadly in Latin America, which has suffered many human rights atrocities in its history.