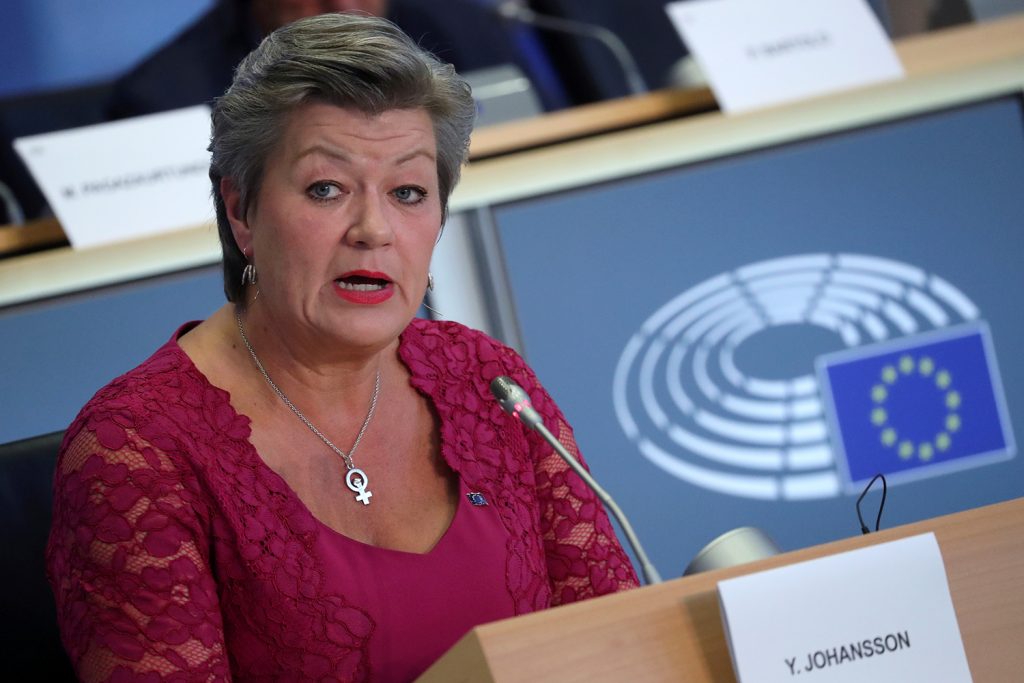 Commissioner Johansson shared her optimism on the pace and the scale of the response by the EU’s executive so far during a virtual interview with the Atlantic Council on April 7. “The financial crisis of 2009, some say it took four years to respond – compared to four weeks today.” But Johansson stressed that the current crisis is a “marathon” and the EU institutions will have to continue to deliver efficiently on liquidity for companies, procurement, border protection, the single market, and the repatriation of EU citizens. She also underlined that while this is a limited competency of the Union, the Commission had still demonstrated a strong response in the public health area, much like for the economy or for education.

While economies around the world have seen a sharp increase in unemployment, Commissioner Johansson also underlined the importance of the system put in place to support workers during the lockdown. The Commission has set up a program for employers to receive financial support in order to retain their workers during the lockdown. This would allow companies to preserve a skilled workforce and guarantee an easier, speedier transition into recovery. “I think this is important for the European way of life,” said Johansson.

Speaking of her home affairs portfolio, which includes migration and a variety of internal security issues, the commissioner emphasized that migrants are among the most vulnerable populations to the effects of the virus. As the EU is facing a new influx of refugees, especially on the Greek islands along Turkey’s coast, the emergency response action plan developed with the Greek authorities seeks to relocate those most in danger to other European member states, as well as transfer of healthcare workers and equipment in order to share the burden. The commissioner also welcomed Portugal’s initiative to extend the coverage for its national citizens’ welfare and social protection services to refugees and migrants during the crisis.

Commissioner Johansson also announced that the Commission has almost finished its New Pact on Asylum and Migration and said she did not expect the pandemic to have a significant impact on the agreement. Rather, the current crisis reinforces the political need for finding solutions together in an orderly way. “Migration has always been here, and our values for asylum seekers shouldn’t change.”

Commissioner Johansson also expressed confidence in the Schengen Agreement—an area of twenty-six EU and non-EU countries with external borders and internal freedom of movement, which is a core dimension of the European Union. The agreement allows a certain flexibility in reinstating boundaries for security concerns and current border closures during a pandemic crisis such as this one should not be a concern, according to the commissioner. “The immediate response from many member states was to close down their borders and place restrictions, but it took a short time before they instead asked for cooperation, coordination, and try to find ways to continue the flow of goods and of cross-border workers.” Alluding to the initial panic buying of goods, she also underlined the importance of being “good neighbors” instead and demonstrating solidarity as the best long-term strategy to fight the virus.

Commissioner Johansson also highlighted developments in cybercrime as another core area of her portfolio. A recent Europol study has found a recent spike in cybercrimes aimed at profiting from panic buying during the pandemic. Johansson pointed out the speed with which criminals were able to adapt into this situation, and consequently, how law enforcement and police forces must be quick to adapt to cooperating and fighting against online crime, both at the European and transatlantic levels. Despite progress in the international coordination, she remarked that there is still work to do, such as a modernizing legislation on court evidence to allow use of online materials. Regardless of techniques, however, Ylva Johansson cautioned that interstate cooperation remains key to fight organized crime. “Even if these crimes are not part of the headlines, they are ongoing.”

The fight against the pandemic goes beyond institutions and must mobilize both our societies and individuals in order to safeguard our principles. The key now, according to Johansson, is preserve the current partnership between the United States and the EU. “There are threats against the rule of law, our democracies, our freedom, and threats in form of false information,” she said. “In these times we must unite our forces to protect our fundamental values.”

Image: Ylva Johansson of Sweden attends a hearing before the European Parliament in Brussels, Belgium October 1, 2019, before she was confirmed as European Home Affairs Commissioner. REUTERS/Yves Herman/File Photo