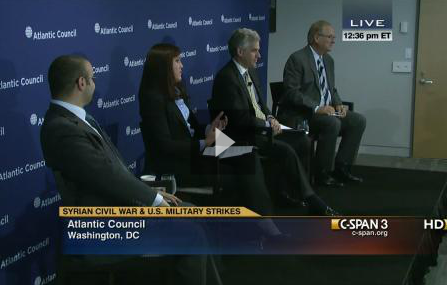 Hof opened the discussion with a brief analysis of the Obama administration’s reaction to the chemical weapons attack on civilians in a Damascus suburb on August 21. He characterized the incident as a clear violation of international prohibitions against the use of chemical weapons and a direct challenge to the credibility of President Obama and the United States. He went on to criticize the administration’s lack of an objectives-based strategy toward Syria.

Pavel argued that US strategic objectives in the conflict will likely fall along a spectrum of options ranging from deterrence of future chemical weapon use to the establishment of safe areas on Syrian territory. He suggested that the Obama administration appears focused on a limited approach in favor of deterrence. However, he further argued that for deterrence to be achieved there must be swift, effective action paired with an element of secrecy. Pavel was quick to note that the Obama administration has violated both of these elements by allowing leaks and delaying action by seeking Congressional support for a limited strike.

O’Bagy focused on responses to a punitive US military action, which she argued will likely be negative, with detrimental psychological effects on both the opposition and civilian population as well as an escalation of violence, be it through further use of chemical weapons or attacks on regional allies. She argued that any US military action taken in Syria should be aimed at significantly degrading Assad’s military capabilities. Based on her personal interactions with Syrians on the ground, she stated that most civilians and opposition forces prefer a wider international response to Assad’s use of chemical weapons.

Itani agreed that a “pinprick” action on the part of the United States would result in escalating the situation and further destabilizing the region. At best, the type of action that the US is currently contemplating will result in nothing but a delay in Assad’s use of chemical weapons. At worst, it would entirely change the regional calculus to the detriment of US interests. Itani argued the need for more robust, sustained support for the Syrian opposition, and that the US failure to do so until now is likely to blame for the current situation.