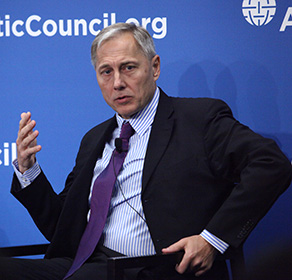 On October 20th, the Atlantic Council’s South Asia Center hosted a discussion with the Special Representative of the European Union Ambassador Franz-Michel Mellbin. With a fresh view from the ground in Kabul, Ambassador Mellbin discussed the slow, but consistent progress that the Afghan National Security Forces (ANSF) have made, and argued that contrary to the conventional wisdom, the recent events in Kunduz are more a reflection of political failure rather than of ANSF weakness. He underlined that the upcoming NATO Summit in Warsaw and Donor Conference in Brussels are significant events during which supporting countries can reconfirm their commitment for Afghanistan. Mellbin noted that it remains to be seen whether the approach by the West to “float the state” is sustainable.

On the regional front, Mellbin spoke of the need for the West to rearticulate its strategy in Pakistan. In order to move forward on cooperation with Pakistan, he argued, the West must engage in a more qualitative discussion on what Pakistan sees as an end state for itself in Afghanistan. Mellbin also posited that stronger ties between the U.S. and China are possible, considering the like-mindedness between Washington and Beijing, and could only reinforce achievements in Afghanistan. Concerning Iran, Mellbin pointed out that the recent nuclear deal provides for more political space for the US in the region.

On the question of ISIS, Mellbin mentioned that ISIS has not gained a foothold, as seen in Iraq and Syria. He explained, however, that if peace talks do succeed with the Taliban, it is possible that some insurgents may turn to ISIS.