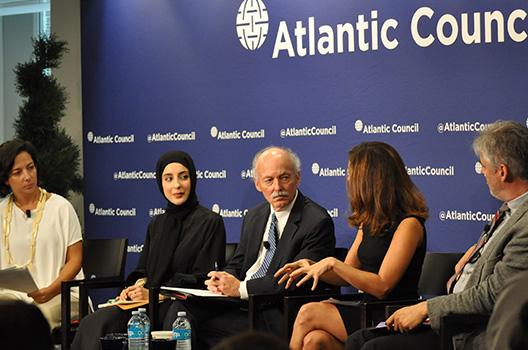 On Thursday, September 1, 12:00 – 2:00 p.m., the Atlantic Council hosted a discussion on the importance of harnessing the power of youth in the Middle East and North Africa (MENA), welcoming HE Shamma Al Mazrui, the Minister of State for Youth Affairs of the United Arab Emirates, for her first public speaking appearance in the United States. The panel discussed one of the most critical economic development challenges facing the MENA region – the “youth bulge” – and the challenges and opportunities available to harness the energy and vitality of the youth population.

Joining HE Al Mazrui on the panel were Atlantic Council senior fellow Jasmine El-Gamal; lead specialist and director of the Global Partnership on Youth Employment at the World Bank Mattias Lundberg; and president and CEO of the International Youth Foundation, William Reese. Barry Pavel, Vice President, Arnold Kanter Chair, and Director of the Atlantic Council’s Brent Scowcroft Center on International Security, provided introductory remarks, and Kim Ghattas, correspondent for the BBC in Washington, moderated the panel.

HE Al Mazrui remarked on the UAE’s progress in supporting its youth, and commented on her appointment itself as being “testament” to her country’s commitment to “fighting for the future.” The minister highlighted the serious problems that emerge when there is a gap between a country’s leadership and its youth, emphasizing that if governments do not create authentic channels to connect with their youth, then hopelessness, apathy, and violence can emerge to fill the vacuum. The minister spoke of the policies in which she has been active, including the Youth Circles platform that enables young people to directly share their ideas with government ministers, and programs focused on fostering intergenerational conversations about identity. The minister emphasized the importance of filling the “hope gap” that exists within Arab societies, by highlighting the achievers within society that give young people hope and something to aspire to.

Jasmine El-Gamal commented on the balancing act that governments in the Middle East experience in grappling with the competing priorities of huge youth unemployment, and the pressing challenges to security. In order to alter the narrative of youth as a threat to the status quo in the region, El-Gamal highlighted the importance of continued dialogue and conversation between younger and older generations to change attitudes towards youth empowerment. In referring to youth unemployment and security in the region, El-Gamal asserted that young people need to be engaged more broadly through community service and projects that make them feel connected to society and give them a sense of purpose.

William Reese accentuated the pressing concern of youth unemployment in the region. Solutions to the unemployment issue lie not only in teaching technical skills, stated Reese, but in teaching life skills. This “skills problem” means that soft skills, such as problem-solving and dealing with customers, that employers are looking for must be incorporated into the training of young people. Reese highlighted that the private sector needs to be drawn into this conversation, and that solutions lie in more than training, but in investment.

Mattias Lundberg highlighted the dichotomy between the presence of a relatively educated population in the region, and such high unemployment. In explaining this phenomenon, Lundberg stated that there is an insider-outsider problem that prevents young people from getting access to resources made available to traditional business models. These obstacles exist despite World Bank findings that show self-employment to be one of the most successful modes of employment in the region. Lundberg emphasized that the constraints placed on youth employment must be addressed in systemic ways, in order to ensure sustainable development. The panel closed with a question and answer session with the audience.