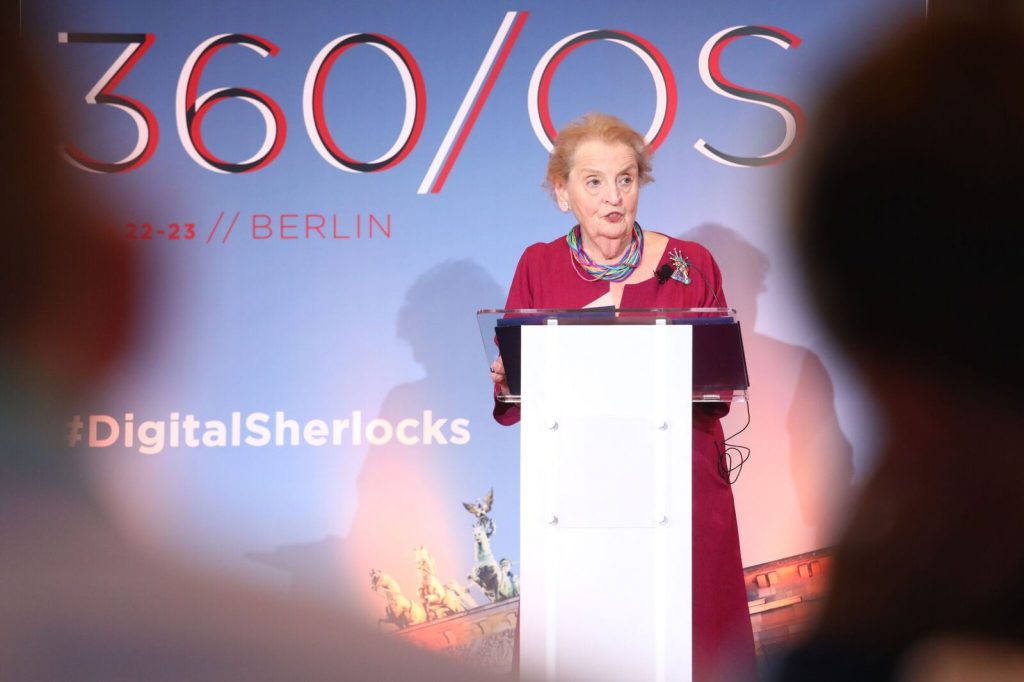 I am delighted to be here in Berlin, and I want to thank the Atlantic Council’s Digital Forensic Research Lab for inviting me to participate in this unique summit.

I have had many titles throughout my career, and I have also been called a few names – some of them flattering, others not so much.

But after participating in yesterday’s geolocation challenge, I can add another to the list: Digital Sherlock.

I consider this quite the accomplishment because, in case you didn’t notice, I belong to a different generation than most of you.

As I often tell my students, I was born halfway between the discovery of fire and the invention of the iPad.

But to prove my technological bona fides, I also tell my students that I have been in a driverless car, I have spent time in virtual reality, and I have made it a regular habit to visit Silicon Valley for meetings with technology leaders – most of whom are my grandchildren’s age.

Those visits are not without risk.

During one trip, to a startup, I was run over by a robot.

My grasp of how technology works may be faith-based, but my perception of its impact on international affairs comes from experience.

I am also a professor, and I devoted much of my academic career to studying a subject directly relevant to our discussion today – the role of information in political change.

My research focused on the Soviet bloc – a subject which has in recent times become all too relevant.

In the 1970s, I wrote my dissertation on the Czechoslovak free press and the Prague Spring.

In the early 1980s, I traveled to Poland to study the underground press of the Solidarity movement.

I met with dozens of journalists, who told me that while they started out by delivering typed news sheets to workers in factories, they found they could increase their speed of communication and the reach of their message by using what was then considered a cutting-edge technology – the audiocassette.

I remember thinking about those tapes in 2011, as I watched activists in Tunisia and Egypt use social media to organize, communicate, and ultimately topple two entrenched regimes.

It was easy, in the immediate aftermath of the Arab Spring, to believe that these new tools of communication had only transformed politics for the better, and that the spread of Twitter and Facebook would inevitably lead to more open and democratic societies.

But as our agenda attests, those views turned out to be too optimistic – because like so many other things, technology is a double-edged sword.

These lies are then used by predatory political movements that violate what we used to consider the acceptable bounds of civic debate, and by political leaders who promise easy answers, exploit social divisions for their own purposes, and utter falsehoods with every breath.

Meanwhile, leaders who play by the rules are having trouble staying ahead of a relentless news cycle and must devote too much effort trying to disprove stories that seem to come out of nowhere and have been invented solely to do them in.

All this has consequences, which is why people who once heralded the birth of the social media age are now wondering whether democracy can survive it.

During the American War for Independence, the rebel minister to Paris, Benjamin Franklin, used his printing press to circulate stories he had made up about British atrocities. And under the communist systems I once studied, official news sources were nothing more than mouthpieces for government propaganda.

However, just because a technique isn’t new doesn’t mean it’s not dangerous.

The cost of spreading falsehoods through social media is minimal and so, for those who are adept at it, is the effort required.

The deployment of fact-checkers is helpful but can seem like dispatching a tortoise in pursuit of a hare that, unlike Aesop’s, has no intention of slowing down.

Having spent time in Brussels and Berlin this week, I know that member states and the European Union are pursuing a variety of policy initiatives and establishing a framework for the role regulators can play in addressing this challenge.

Speaking frankly, Europe is far ahead of the United States when it comes to online protection.

Many are predicting that the new General Data Protection Regulation will over time become the global standard. And Brussels has been at the heart of actions to regulate U.S.-based Internet companies.

In my country, two main elements have complicated and slowed similar efforts.

First, our current Congress and Administration instinctively reject even sensible regulation – and in this case, they can claim rules will stifle the innovation that has made our IT sector the world’s most dynamic.

Second, the lingering confusion and acrimony over the 2016 presidential election – and the ongoing investigations into the nature and scope of Russia’s electoral interference – have constrained official efforts to stop disinformation.

I have been concerned for some time about the disinformation issue turning into a partisan matter in my country.

It is a threat to our democratic institutions, to political parties on the right and the left, and to countries on both sides of the Atlantic.

We cannot forget that.

We also cannot forget that Russia is not the only practitioner of these dark arts.

This has become a worldwide threat, with North Korea, China, Venezuela, the Philippines and Turkey employing squads of opinion-shapers to flood online sites.

Extremist political movements, including terrorist groups, are engaging in the same practice.

So we need a global response that involves governments, civil society, the technology industry, and the experts that build and improve the tools we use.

All these players have a role to play in protecting democracy, but the operators of social media platforms have a particular duty to respond and protect their users.

The view that these companies have no responsibility for the impact of the content on these platforms is convenient and, when articulated as a way to defend free expression, seductive to many.

That approach, however, carries with it the risk that we will fail to address fundamental problems. Or, far worse, governments will feel compelled to impose the kind of regulations that may ultimately corrode both democracy and freedom.

I believe there is another path, one that involves closer cooperation between the technology companies and advocates for democracy around the world.

As Chairman of the U.S.-based National Democratic Institute, I am involved in a new initiative aiming to forge that type of cooperation.

We are calling it the Design 4 Democracy Coalition.

With support from the tech industry, it will bring together key actors in the global democracy community – including political parties across the ideological spectrum, parliamentary monitoring organizations, civic tech partners, and election monitors.

Our aim is to make it easier for these groups to engage and coordinate directly with technology firms, and vice versa.

This will help democracy advocates and practitioners access the latest tools and best practices for responding to disinformation. And, done right, it will also help the technology community understand and move earlier to resolve democracy-related problems on their platforms.

When stronger advocacy is needed to push technology companies to do what is in the best interest of democracy and the long-term health of their platforms, the coalition will be able to do so through a more coordinated and united front.

The coalition will complement the important work that other organizations – including the Atlantic Council’s Digital Forensic Research Lab – are doing to expose and fight disinformation.

As this conference proves, there is an emerging network of technologists, democracy activists, and policy experts, many drawn from countries on the front-lines of the disinformation battles.

It is important for this network to grow wider and to grow deeper, because what we have witnessed in terms of disinformation thus far is just the beginning.

It is becoming almost simple to generate products that show people – including politicians – doing things they didn’t do and saying things they never said.

Artificial intelligence and machine learning are also making it easier not only to distribute messages to targeted audiences, but also to generate content that is highly targeted to individuals based on their personal data.

Imagine a foreign agent creeping into your bedroom every night to whisper lies in your ear, then multiply the number of agents and lies many times over. If a lie is repeated 10 times, it can be corrected; if a lie is repeated thousands of times, it risks becoming accepted as truth.

We need to understand the kind of danger this represents.

After all, without respect for truth, there would be no civilization.

That’s why even the very first law codes in ancient Babylonia included penalties for perjury and bearing false witness.

Truth-telling is the basis of social compacts and business agreements.

It’s the key to honorable relations between people and nations.

It’s essential to prove a point, educate a child, or provide the foundation for government of, by and for the people.

It is also our most potent weapon in the fight against dictators and despots.

We need to remind ourselves constantly that there is a reason we believe in transparency, while authoritarians do not.

We have an interest in objective facts because they are, more often than not, on our side.

But we also need to remind ourselves that there is nothing new about the basic challenge of adapting institutions to keep pace with change.

Tomas Masaryk, the first president of my native Czechoslovakia, used to marvel at the transformation in public habits and discourse created by the invention of the Sunday newspaper.

Radio became an unprecedented political tool in the hands of Franklin Roosevelt – and Adolf Hitler.

Television brought graphic images of war, poverty and famine into our living rooms for the first time.

Now we find ourselves facing a new era with new tools that have the power to spread information across the landscape with unprecedented speed and scale.

We have no choice but to accept that challenge, and to explore together – as we are in this conference – how best to work together for the common good.

In that effort, I hope we will bear in mind that – although we live in a world of change – what matters most must not change. And that is our basic commitment to democratic values, our respect for one another, and our commitment to justice and the dignity of every human being.

If we abandon those principles, we will lose our way. But if we hold them tight, we will not go wrong.

My thanks once again to all you for your kind attention here this morning. I look forward to today’s discussion.