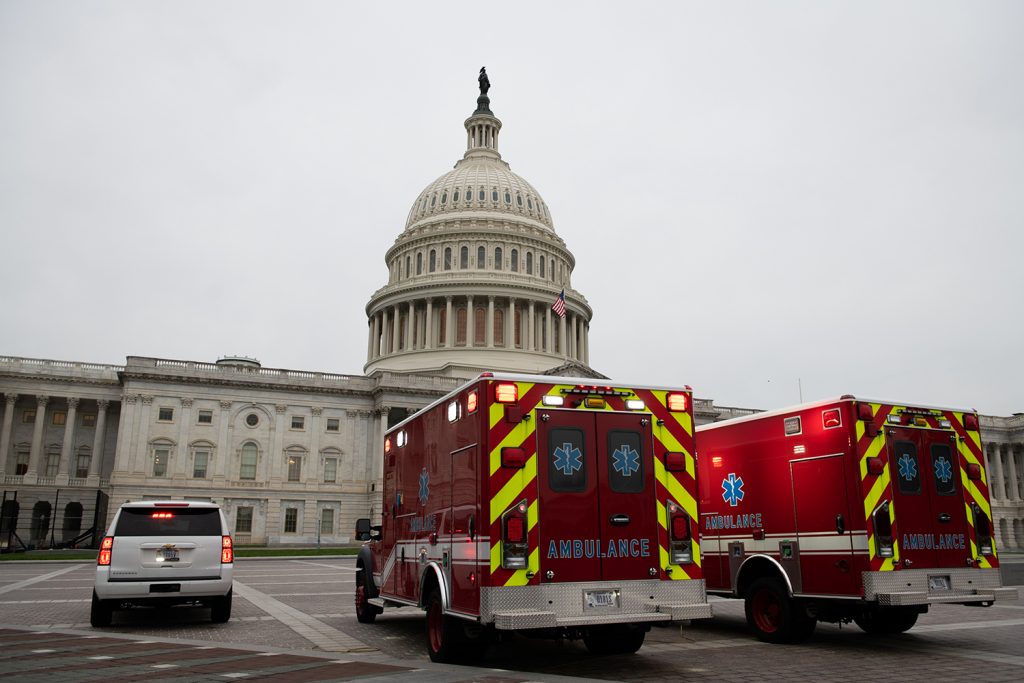 A mid-2019 Pew poll showed that a strong majority of Americans expected US political polarization to intensify, causing continued decline in the country’s global stature. A whopping 85 percent of respondents declared being either worried or very worried “about the ability of political leaders to solve the country’s biggest problems.”

Public fear and anxiety about the country’s fractious political echelon is now multiplied by grave new national challenges created by the pandemic while increasing the magnitude of preexisting threats that the political system had been unable to cope with before the virus began its catastrophic run. For a country in crisis, division and dysfunction are no longer affordable or tolerable. They are deadly.

Overcoming these future-defining challenges requires the country to flatten the curve on its political ills and cure them. Crisis typically comes with the impetus and opportunity for positive change. The United States must seize it.

The system of US self-government designed to reconcile disparate opinion and forge consensus has been gamed and hacked by the warring political parties to the point it does neither very well. The master mutation occurred when the political duopoly came to embrace national polarization not as a problem to be solved, but as a mutually beneficial strategy to be exploited in their grand power sweepstakes. The result is paralytic politics and faltering governance that has put the country at risk across many fronts predating coronavirus but now multiplied by it.

Democracy in retreat. The United States’ growing political disarray has long shaken the confidence of admirers and emulators worldwide undermining US standing and influence. Globally, democracy is on the retreat, autocracy is on the rise, and human rights are on the run, making the world more inhospitable to human development and peace. The economic and social stresses caused by pandemic will sharpen the threat to democracy, requiring US leadership at its best when politics remain at their worst.

Fraying alliances. US political derangement has left friends and allies wondering whether the country can still be relied upon as a security ally, trading partner, and leader. The political performance in the throes of pandemic crisis has not been cause for greater comfort when confidence in the United States is needed most and strong alliances will prove more important than ever. The COVID-19 experience has broadened our conception of national security, not only requiring broader whole-of-government approaches at home but requiring new allied strategies and arrangements. New more resilient trans-border supply chains and trade relationships must be forged. National and global economic recoveries and the maintenance of order in a world under stress will demand careful modernization, including to US-led economic and security alliances. US global leadership in these essential endeavors seems farfetched when mayors are fighting governors, governors are fighting the president, and Congress is fighting with itself while public trust in leadership founders.

Weaponizing political division. Foreign powers have been working strategically to fuel domestic discord, seeking to destroy public trust in the country’s institutions and weaken our democracy from within.  What should have been a five-alarm national response to US election tampering, became mainly a partisan infight—deeply satisfying and affirming to the perpetrators. Digital forensic experts report that Russian bots are busy spreading misinformation about coronavirus. We can expect that adversaries will seize the opportunity to further divide US society and sow political discord in the throes of crisis. The question is, will we allow damaging partisan intramurals to persist in making us even more vulnerable to these tactics?

Cyber-insecurity. Securing digital networks has long been a national security imperative. Yet, solutions fall victim to conflicting Congressional committee jurisdictions and public-private sector antagonism. Quarantine-enforced remote work and the ongoing trend toward the Internet of Things and tele-everything sharpens the urgency of preventing a catastrophic cyberattack.

China’s digital virus. The world is suffering profoundly from the spread of disease arising from a foreign power seeking to spread its autocratic model and influence. China has been strategically seeding the world with security compromised micro-electronics to form digital beachheads in its campaign to supplant US influence and values worldwide. Yet, the leader of the free world and architect of the information and communications technological revolution has yet to counter it. Will coronavirus weaken or strengthen our political will and capacity to do so?

Faltering healthcare. For many years, the United States has spent twice the percentage of national gross domestic product for healthcare (from the world’s largest economy) than other developed countries but trails badly in key healthcare outcomes and disease prevention. Staving off the spread and downstream reemergence of COVID-19 (and preparing ourselves for the next microscopic monster) confers even greater urgency on improving public health and the health care delivery system. Such a demanding task can’t be accomplished by a Congress incapacitated by partisanship.

Rising wealth gap.  It has been almost sixty years since the United States launched the “war on poverty,” expending many trillions of tax dollars in prosecuting it. Yet, troubled communities remain mired in rigid cycles of poverty, contributing to rising income gaps and weaker national resilience. The disparate impact of pandemic will drive even greater focus on inequality and the need to make struggling communities and families more economically resilient. New and dire challenges will enhance the appeal of poor palliative policies that can place the country at even greater risk, while creative policy will be impeded by the rigid forces of status quo. Party warfare will ensure that both extremes will be powerfully arrayed and well-financed against the sensible center.

Failing education system. Election season is incomplete without the parties doing rhetorical battle over an education system failing the nation’s student body. Still we languish. The United States remains unable to foster the student performance and STEM skills necessary to thrive.  Better education becomes even more important in the campaign to restore and maintain economic growth for the long-term. But it will require smart policy forged by independent thinking to accomplish.

Crumbling infrastructure. Critical infrastructure across the country remains in gross disrepair, undermining US competitiveness as we work to rebound. This was among the few items on the administration’s and Congress’ slim joint agenda and an issue that has some bipartisan support, yet the mission remains unfinished, like the $5 trillion public works backlog that still goes wanting.

Broken borders. Decades have been spent talking about coming to grips with a broken border management and immigration system with no resolution in sight. The enhanced public and global health factor and the need to foster greater development and stability to the south adds urgency to doing it right. The issue has proven to be an excellent wedge issue, better for partisan arguing than solving. It’s a deadlock that not even perennial “bipartisan gangs” or the Problem Solvers Caucus in the House (composed of forty-eight members out of the 435 people elected to solve problems) has been able to break.

Overwhelming debt. A growing portion of each year’s federal budget is consumed by debt service that deprives national needs. The United States will soon spend as much per year to pay interest on federal debt as we do national defense. Meanwhile unsustainable entitlement programs fall progressively out of balance. The gravity of the challenge is now intensified by massive new borrowing and expenditures needed to shore up a weakened economy amid declining receipts.

For too long these and other priority national challenges have gone unaddressed except in heated partisan screaming matches and negative political ads. Navigating the current crisis and meeting the severe challenges that COVID-19 complexifies can’t possibly be accomplished by a broken polity, a system geared for division, and leaders preoccupied with partisan infighting and electioneering.

A legacy of the coronavirus cataclysm must be major US political reform as a gateway for the other reforms sorely needed to keep the United States strong and the nation’s global leadership intact to meet the monumental challenges ahead.

John Raidt is a nonresident senior fellow in the Middle East Security Initiative of the Scowcroft Center for Strategy and Security.

The United States faces threats from outside its borders, but also from within. The political system that once created a strong, prosperous, and united nation now sows division. This report, written by John Raidt, unpacks how the fuel—money—drives the cartel’s machinations as it interacts with and exploits amplifying forces—legal, structural, media, technological, and social.

Image: Emergency vehicles have their sirens and lights checked near the U.S. Capitol in Washington, D.C. on April 20, 2020 amid the Coronavirus pandemic. Over the weekend, Congressional negotiations continued on an additional economic stimulus bill in response to the worsening COVID-19 outbreak, as President Trump encouraged protesters nationwide who demonstrated to reopen the economy and end social distancing measures. (Graeme Sloan/Sipa USA)No Use UK. No Use Germany.