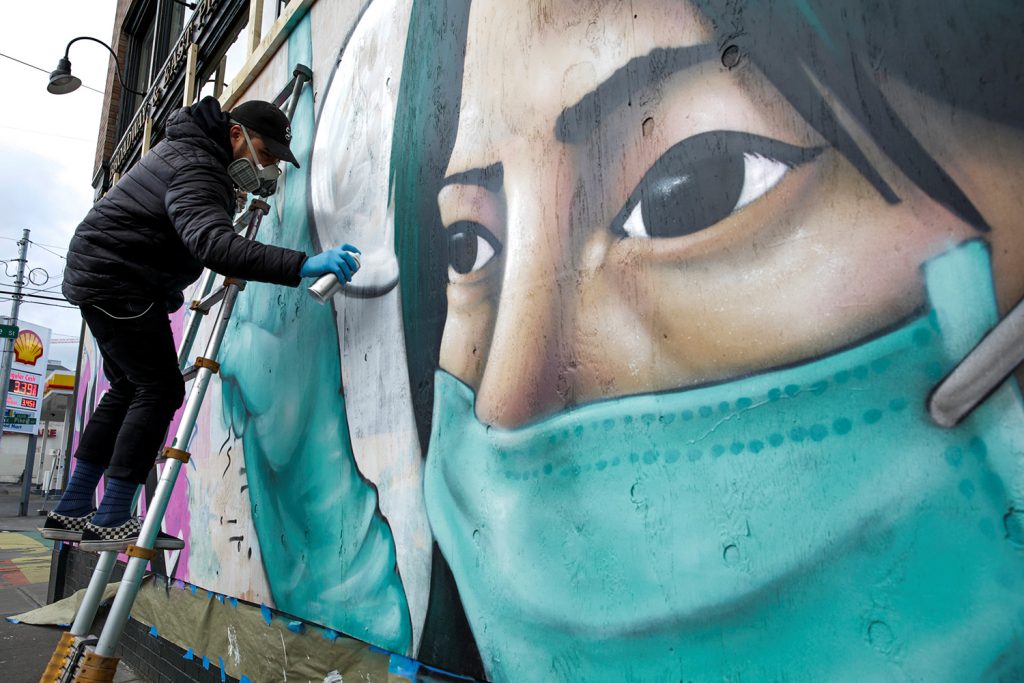 Max Brooks’ “World War Z,” a novel about a zombie apocalypse, is, among other things, a parable of resilience following initial catastrophe. It fits our times.

In the book, the world fails to recognize a growing danger when it can be managed. When governments finally respond, they often do so with smug complacency and suffer the consequences. When the US Army confronts the zombie hordes outside New York City, it uses conventional tactics and is overrun; the fictional Battle of Yonkers is a disaster. Panic follows. Happily, that’s not the end of the story. In a show of resilience, the United States pulls itself together, learns from other countries (South Africa and India especially), works out new approaches to the challenge, and leads an effective global counterattack. A sadder but wiser world emerges.

The initial US response to the coronavirus has followed many of the errors depicted in “World War Z”: denial, complacency, and initial incompetence, especially at the federal level (botched testing, inadequate medical supplies, and the president’s inconsistent messaging). Moreover, US President Donald J. Trump has shown little anti-coronavirus leadership internationally and has even trashed Germany for no good reason. Meanwhile, China and Russia are claiming that their authoritarian model works and are making the most of their modest deliveries of medical supplies around the world, including Italy and even the United States. Little wonder that critics have been writing downbeat predictions of the end of the US-led international order.

Historical perspective provides some solace, however. The coronavirus as a war metaphor may or may not be apt, but messing up at the start of wars is an American tradition. George Washington became a good general only after losing many battles. The Union Army went from disaster to disaster in the Civil War before finding its footing. World War II for the United States started with catastrophe at Pearl Harbor and a series of defeats in the Pacific. The United States came close to losing the Korean War in its opening weeks. In all these cases, the United States learned from its mistakes and turned around its fortunes. The fight against the coronavirus may take the same course.

But getting to (and sustaining) a happy ending requires dealing with deeper weaknesses that the coronavirus crisis has revealed. Public health infrastructure turns out to be inadequate; federal strategic reserves of equipment are shallower than need requires; America’s doctors and nurses struggle with shocking inadequacies.

Should we be surprised? The United States has been starving its public sector, the military excepted, for more than a generation. Squeezing budgets, disinvestment in critical infrastructure, and denigrating government have become habits. Public institutions have been political punching bags for decades. Private wealth has been celebrated and supported (including through tax cuts and a tax structure that benefits the wealthy and comfortable). Private wealth and entrepreneurship are good. But, as we are coming to learn, private prosperity needs a strong foundation of public assets, and the United States has allowed this to shrivel.

The brittleness of the current US lopsided system, now laid bare by a single, sudden shock, complicates our ability to cope as the US and probably world economy drop into sudden depression, whose depth and duration are unknown (V-shaped, U-shaped, or L-shaped are all possibilities that we can contemplate while descending). We need to fix this as we recover from the coronavirus depression.

The United States has also neglected another foundation of its strength: the system of international alliances, rules, norms, institutions, and underlying common values that America, in its wisdom, built after the ruin of the Great Depression and World War II. Our grandparents learned the hard way that solidarity was not just a slogan of the left and international cooperation not just a trope of cosmopolitan elites, but both were and are necessary conditions for American prosperity, and the advance of American interests and values. That’s a strategic lesson that the founders of the Atlantic Council took to heart; it remains true today.

President Trump doesn’t seem to agree (though many in his administration do and are doing their best). Again, history can be a guide: The last time that Americans thought that the infrastructure of the world had nothing to do with them, in the 1920s and 1930s, they withdrew from global responsibilities, quarreled with old allies, and let the world go to Hell. Which it did. And picking up the pieces, which America ended up doing, was much more costly.

In Max Brooks’ “World War Z,” America can’t defeat the zombies until it has learned the lessons of past failures and smug arrogance. When it does, when it learns to listen to others, America is ready to lead the world to a hard victory. It’s a good parable of tough lessons.

The real-life advice of Walter Lippmann, the greatest foreign policy journalist of 20th century America, also seems apt. Lippmann was willing to go along with the isolationist consensus of the time but had his awakening when, in 1940, Germany defeated France in just six weeks of fighting. His errors were laid bare. In a speech to his Harvard classmates, Lippmann argued for America to get serious in the face of “mechanized evil,” and his words are worth recalling:

“You have lived the easy way; henceforth, you will live the hard way…You came into a great heritage made by the insight and the sweat and the blood of inspired and devoted and courageous men; thoughtlessly and in utmost self-indulgence you have all but squandered this inheritance. Now only by the heroic virtues which made this inheritance can you restore it again…You took the good things for granted. Now you must earn them again…For every right that you cherish, you have a duty which you must fulfill. For every hope that you entertain, you have a task that you must perform. For every good that you wish to preserve, you will have to sacrifice your comfort and your ease. There is nothing for nothing any longer.”

You want to defeat the coronavirus, “organized mechanized evil,” global warming, or the many challenges known and unknown that await? As we contemplate the road back from the coronavirus depression, we need to think big and fix things, at home and abroad. We’re still going deeper into an American disaster. But American resilience can get us out of it.

In stepping forward to calm US financial markets, reactivate swap lines, and create the new foreign repo facility, the Fed has helped backstop the global economy. One may argue whether the United States is still the indispensable nation. What is clear is that, in a crisis, the Federal Reserve is the indispensable central bank.

Leading through the mud

The sacrifices required to defeat the coronavirus do not require mass death. Loose talk of allowing coronavirus to kill people—young as well as old—to advance a politically-driven schedule for an early announcement of success is morally abhorrent.

Image: Street artist Carlos Giovanni, who goes by the name TheyDrift, works on the portrait of a healthcare worker for a piece he calls "Stay Home" on the same day that Governor Jay Inslee extended his stay-home order until May 4 as efforts continue to slow the spread of coronavirus disease (COVID-19) in Seattle, Washington, U.S. April 2, 2020. REUTERS/Jason Redmond