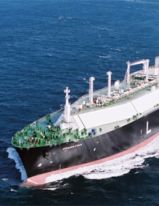 On CNN.com last week, Congressman John Garamendi of California argued that the “Russian incursion [into Crimea] may be opportunity for U.S. mariners”. He wants to export American natural gas to Europe, but he wants to mandate that it travel on ships built by and crewed by Americans. While isolating Russia economically may be sound strategy, the congressman’s shipbuilding tack-on would be nothing more than opportunistic protectionism.

Russia’s two serious exports today are gas and guns, and from each the country and the ruling faction make a lot of money. That duality shows how Russia’s economic progress remains narrow after fifteen years of stewardship by Messrs. Putin and Medvedev. To quote Yuri Orlov, still “no one is lining up to buy their cars.” Naturally, the allies can’t choke off that arms trade without a war. But Russia does supply 30 percent of Europe’s natural gas, and this creates a bilateral dependence. Working together, Europe and North America may hope to supplant that Russian gas with the output of the shale boom. Europeans may wind up paying more for North American gas, but the political benefit may be worth the cost.

That said, Europeans shouldn’t have to pay more than necessary. Plenty of gas moves across oceans today by liquified natural gas (LNG) tanker, so exports would require additional tankers. The ocean-going US merchant fleet today has no LNG tankers, and just 90 ships of all types. They basically serve two protected markets. The first is trade between pairs of US ports (excepting the Virgin Islands), as mandated by the Jones Act of 1920. The second is hauling cargo on federal contracts overseas. Either way, it’s not a globally competitive industry. Thus, mandating that American gas travel on American ships cannot make it less expensive, and in the short run, could make it a lot more expensive.

Garamendi offers several counterarguments. “Our naval superiority,” he says, may falter without “the necessary investments to maintain and enhance our technological edge.” Building LNG tankers domestically would produce a “new source of high-paying jobs, both in the shipyards and in our Merchant Marine.” And opposing this idea is “about the bottom line of energy companies and not the bottom line of America’s shipbuilding industry.”

The first argument is overdone. It is reasonable to think that commercial shipbuilding skills might be useful in building warships too. That’s why Wisconsin’s Marinette Marine and Lockheed Martin licensed part of their littoral combat ship design from Italy’s Fincantieri. That’s why California’s NASSCO has been working on productivity improvements with South Korea’s Daewoo. And because naval shipbuilding in the US is actually a good business, Fincantieri eventually bought a majority stake in Marinette, and Australian Aluminum (Austal) set up a shipyard in Alabama. In short, if the Navy needs the technologies, it has the money to attract the investment to American coasts.

The second argument is just old-fashioned protectionism for old-fashioned industries. In theory, a strategic industry—and particularly an emerging one—may merit subsidy or protection, but the construction and operation of LNG tankers doesn’t qualify. Letting other people handle America’s oceanic imports and exports has been working for at least half a century. When we hear allegations of foreign subsidy, we should recognize how that’s actually good for the US. Other countries’ taxpayers are making the ships that ship American goods less expensive. Today, American shipbuilders’ acumen lies with warships. They could make the investments necessary to challenge the dominant Japanese and South Korean firms in building LNG tankers, and perhaps they will—the market has gotten attractive lately. If NASSCO or Huntington Ingalls wants to jump in, either can make that wager. Handing them a slice of the market without strain will do nothing for anyone’s competitiveness. Leaving them alone will—when Americans want high-paying jobs, they go to Google and Apple.

The third argument shows the usual motive to protectionism: baldly picking favorites. Within the US, mandating that US gas travel on US ships would simply be a net transfer of wealth from gas-producing states to shipbuilding states. Does Garamendi have something against North Dakota?

But would this mandate also transfer wealth from Europe to the US? Only if Europeans can be convinced to forgo those imports of cheaper Russian gas. Mandating that they take American gas on American ships would just exacerbate the problem. There is indeed opportunity here, but it’s only political. The attempt at an economic shakedown is just an impulse to be avoided.