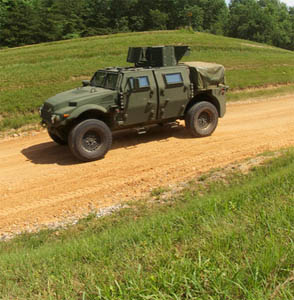 The economics of intellectual property rights reveals the managerial challenge of military procurement.

In promulgating his ‘Better Buying Power’ (BBP) initiative back in September 2010, Ashton Carter directed the Pentagon’s program managers to routinely consider purchasing technical data packages (TDPs) and associated design licenses to new weapon systems. With TDPs in their possession, program managers hold the option for future competition, as they can solicit bids for build-to-print contracts. Without TDPs, the government can still negotiate with its sole source for future lots, but presumably at higher prices. Knowing how to value TDPs can be hard. Nevertheless, as the current case of the Joint Light Tactical Vehicle (JLTV) shows, it’s a smart exercise of buyer power.

Just days ago, the JLTV project office released a draft of its source selection criteria for serial production of vehicles. The criteria include manufacturing readiness and small business participation, but most important are technical performance thresholds and cost. The Army’s view of what it calls “evaluated cost” is the contractor’s bid less an adjustment for life cycle costs, a deduction for meeting certain performance objectives, and a deduction for offering the TDP. (But suppliers beware: the program office intends to hold you contractually to those quotes and promises.) I have previously railed against competitions in which the government tries to sort through monopolistic competition with a lowest price, technically acceptable (LPTA) approach. This is quite different, and I am delighted that the JLTV office is following a more enlightened strategy.

What I find most interesting is how the government will adjust the scoring for offering the TDP, which will be priced separately in the bids. The program office will then deduct from the overall bid the difference between the government’s willingness to pay and the price of those rights, times a ‘competitive utility multiplier’:

As I argue in a forthcoming article,* this work is no easy task. Neither the government nor its potential suppliers can be certain of future costs and prices, as every actor in the system is planning, bidding, or negotiating with imperfect information about advanced technologies. The program manager will have broad technical knowledge of armored vehicles, and the should-cost analysis that BBP directs, but he is not a production manager with a first-hand understanding of contractors’ costs. Whoever is chosen as the original source will know his own production capabilities reasonably well, but much less about a competitor’s costs. That potential second source will similarly understand his own production capabilities, but he will lack the tacit knowledge amassed during the development of the system.

And as four professors at the Defense Systems Management College recently argued in DAT&L Magazine, even the commonly calculated breakpoints of economic order quantities (EOQs), economic production rates (EPRs), and minimum sustaining rates (MSRs), despite their official acronyms and emphasis in the education of program managers, can be “surprisingly difficult to pin down.” As future competitive effect is hard to know with certainty today, this multiplier is effectively a fudge factor.

Thus, purchasing TDPs starts as an analytical challenge and proceeds as a risky investment. In this case, the government’s long-run procurement strategy for the JLTV may or may not work perfectly. If it does not, we may hear the Army lambasted for waste and mismanagement. But not all the maxims of military procurement are obvious. The Army deserves plaudits, and not just the criticisms of pundits, for tackling a complex procurement with a well-considered strategy. TDPs and BBP will not solve all the government’s spending problems, but that is no reason to shy from the task.

James Hasík is a senior fellow in the Brent Scowcroft Center on International Security.