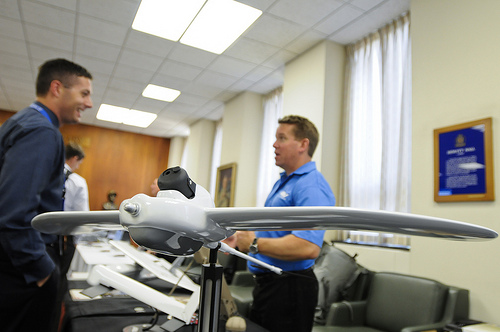 Market contractions are frequently time for industrial restructuring, yet merger activity in defense is at a ten-year low. To start, a handful of strong signals from the US and German governments have discouraged even speculation about mergers between the largest firms. Moreover, with so much uncertainty over customers’ spending plans, valuations are hard to gauge, and so even relatively small targets have been off the radar screen. But rather than anguishing over what mergers are politically allowable and financially sensible, the industry can still make progress with partnerships.

A week ago, AIN Online reported that AeroVironment and Eurocopter are “exploring opportunities for cooperation”. That’s not quite an alliance yet, but on their own, each company is compelling. AeroVironment claims that it has won literally “every US Department of Defense competition for small UAS programs of record.” Amongst European contractors, Eurocopter has been saliently successful in the US, selling hundreds of Dauphins and Lakotas to the Coast Guard and the Army. The market may like the idea: AVAV has risen on the NASDAQ by about a fifth over the past three weeks.

But this begs the question of whether an alliance, as opposed to any other form of organization, makes sense here. AeroVironment could try to develop its own rotor-drones. Eurocopter could work more to develop pilotless helicopters. One of the companies could license the needed technology from the other. The two could form a temporary teaming arrangement to pursue a specific program. They could even develop a formal and lasting joint venture. Or, frankly, the company soon to be Airbus Helicopters could just try to buy AeroVironment. So what makes simple—or not so simple—cooperation between companies so attractive in this case?

There are plenty of reasons to form alliances, but alliances can be challenging to manage, so interested parties should know what helps hold them together over time. After seeing a number of alliances in the defense industry succeed and fail, I sensed the importance of this question, and then researched and wrote a book on the topic: Arms and Innovation (University of Chicago Press, 2008). With the help of a large literature on corporate alliances, I organized the theory around the conditions for a sound corporate alliance, and tested how this might apply specifically to large and small military contractors, in a series of five case studies.

Just what is that theory? Alliances work best under three conditions, and all three appear present in this match:

A rapidly changing market. Tiltrotors and compounds aside, the helicopter industry is relatively mature technologically, with gradually evolving customer needs and market shares. That’s why the US military is still flying modern versions of the Hueys and Jolly Green Giants from the Vietnam War. But the drone business is another story, as military plans for the unmanned are fully in flux worldwide. An alliance allows both sides to explore possibilities without a full-on investment.

A moderate chance for a shakedown. Practically speaking, we mean the ability for one partner to steal the other’s customers, or at least the value stream flowing from them. While great for one side, that will leave no incentive for the other to preserve the deal. On the other hand, with no tension over transfer prices and customer access, the companies might as well just sign a contract. Alliances consume corporate attention, and lawyers and procurement people are actually cheaper than program managers and CEOs. In the middle ground, though, neither arms-length contracting nor outright acquisition would be efficient. Here, each company is coming from a different side of the Atlantic, and the cooperative area is to be an emerging category, an understanding of how they would divide the world between them might just stick.

Moderately leaky knowledge. If ideas could not flow from company to company, the alliance would hardly work. Better it would be to avoid wasting that scarce managerial time, and just to buy products from one another. But if ideas were too easily appropriated, the deal should be avoided: the stronger firm would stand to gain too much. Fortunately, again, the rotorcraft business seems to lie in a happy medium. The secret sauce of a helicopter company lies mostly in the design of its dynamic components: the transmissions and the rotors. That of a drone company is found in its control software and miniaturization. While smart engineers on either side can understand the language of the other, these technologies are not readily observable, much less mastered by the other side. In this case, measured cooperation doesn’t just make sense; it’s the most feasible approach.

We have seen this before, and more than once. As I wrote in 2008 to summarize my work on the book,

That year, after years in a profitable corporate alliance, Boeing acquired STUAS favorite Insitu, but continued to manage the company at arm’s length. In 2010, after repeated delays over requirements definition (those moving goals mentioned above), Insitu won the competition with its RQ-21A Integrator, and may eventually sell the Navy Department more than 500 of the aircraft. The issues of shakedown and leaky knowledge are necessarily behind them now, but sources at Boeing have explained to me that the dynamism of the industry dissuades Big Boeing from absorbing the smaller firm wholesale. In a fast moving business like unmanned aviation, Insitu still needs some creative runway.

Similarly, Eurocopter may bring customers and skills new to AeroVironment, but I expect that both companies will take care to emphasize the unique strengths. And I am enthused. With budgets declining in North America, and modest at best in Europe, the transatlantic community needs less talk about industrial cooperation, and more budding deal like this one. Under the right circumstances, alliances can be good corporate strategy that also, happily, make for good industrial policy in an age of austerity.