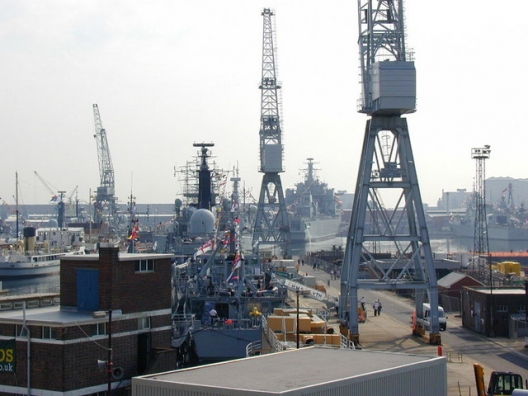 What the Scottish Threat Reveals About the Cost of Domestic Shipbuilding

England, it seems, will soon be without a naval construction yard. Defense News reported this week that BAE Systems will shortly be closing its yard in Portsmouth, for lack of work from the Royal Navy, and consolidating all its British shipbuilding on the Clyde in Scotland. That, a company spokesman told the Wall Street Journal, was the “most effective” location for all its contracts. But what to do if the Scots actually vote for secession? The possible answers to this question lay bare just how much some navies are overpaying for their ships these days.

In answering the question, Prime Minister David Cameron was resolute, telling the House of Commons that “if there was an independent Scotland, we would not have any warships at all.” The Financial Times cited an unnamed official within the coalition government as asserting that Britain simply would not buy warships from a foreign country. But Scotland’s First Deputy Minister Nicola Sturgeon doubted that, arguing that Britain would continue to buy its frigates and aircraft carriers in Scotland “because of the investment we’ve seen in these yards, because of the skill mix and because of the value for money.” And the minister probably realizes that Mr. Cameron is bluffing. For Britain is already buying foreign.

As I mentioned the other day in another column, last year the Ministry of Defense ordered four new Tide-class tankers for the Royal Fleet Auxiliary from Daewoo. The 37,000-ton ships will be built in South Korea, and for just about £115 million each. That price would simply not be attainable in the UK, or in the US. It’s worth comparing that figure—about $174 million at today’s rate—to the $443 million that the US Navy has been paying for its 41,000-ton Lewis & Clark-class replenishment ships. Domestic manufacture is a matter of law in the US, but not of economics.

Similarly, the Canadian government is pursuing a National Shipbuilding Strategy that demands that all ships of the Royal Canadian Navy be built domestically as well. As a result, the Department of National Defence is actually facilitizing Vancouver Shipyards in British Columbia to build just two 20,240-ton Berlin-class replenishment ships. The estimated price there is C$1,450 million, or about US$1,408 million at today’s rate. That several of these ships have already been built in Germany by Flensburger does not seem to matter. Naming them HM Canadian Ships Queenston and Chateauguay, after two victories over the Americans in the War of 1812, was a nice touch, but it does suggest a degree of national pride at work in the cabinet.

The costs of these strategies are easy to calculate, and perhaps painful to regard:

Last month, Defense Industry Daily called that price differential “stunning.” I call it foolish. There are sound strategic reasons to preserve some ship construction capacity, but buying every keel domestically diverts billions of dollars that would fund other military activities, and those in which national strengths are better exploited. In Canada, the US, and the UK, aerospace is an area of comparative advantage. Shipbuilding is not, and hasn’t been in any of those places for forty years. Every dollar or pound devoted to bashing steel for tanker hulls at prices far above the market is another that can’t be devoted to designing and building new aircraft or space satellites. And those are areas in which industry’s skills will make a difference in the next war.