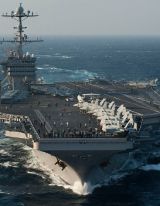 In AvWeek, Bill Sweetman pines for another Polaris program. Here’s how to recapture the magic.

In last week’s issue of Aviation Week & Space Technology, Bill Sweetman observes (“Does the Pentagon give contractors an incentive for slow R&D?”) how the same US Defense Department that

had put a nuclear submarine to sea with sixteen long-range nuclear-tipped ballistic missiles in four years, and taken a spyplane from drawings to operational missions in two years, seemingly became incapable of developing [an airplane] bigger than a primary trainer in less than twenty years. Producing the Air Force’s next bomber in fifteen years (from its 2010 restart) is considered a challenge, even though in many respects it will be a smaller B-2 and the requirements have been ruthlessly pared down.


R&D efforts do seem to be relentlessly growing longer. Perhaps, Sweetman goes on to argue, this is because R&D features a set of pernicious economic incentives. The contracts are necessarily sole-source, so once a contractor has the gig, he’s there for the duration. The contracts are cost-plus, so cost-control, and thus time management, aren’t the contractor’s biggest concerns. Capital requirements are sometimes just a cube farm and a bunch of laptops, so there’s little investment to risk. And the contracts support expensive engineering talent in those cubes, which allows a larger margin at every seat than with hourly touch-labor. One could wonder why a business with a deal like that would ever want to deliver the final prototype.

Ominously, citing Todd Harrison of the CSBA, Sweetman then observes that “R&D spending could equal or even surpass procurement in the coming downturn,” making the problem all the worse. We too have considered the possibility of such an emphasis on R&D. As Kristin Oakley argued in this column recently, with less certainty about future military threats, an investment strategy heavy on R&D spending will buy options for the future. But Sweetman makes one wonder whether that future will ever come.

With this developmental dystopia predicted, the heroic accomplishments of that missile submarine program he references are worth exploring. Polaris is sometimes viewed nostalgically as a miraculous integration of three nascent technologies in a totally novel architecture: nuclear-powered submarines (for long station-keeping on patrol), navigation satellites (for accurate determination of firing positions), and solid-fueled ballistic missiles fired from underwater. The classic telling of the story is Harvey Sapolsky’s book The Polaris System Development: Bureaucratic and Programmatic Success in Government (Harvard University Press, 1972). But close reading reveals that the program manager, then Rear-Admiral William Raborn, took a series of management decisions that Sweetman identifies as problematic today.

Almost all the Polaris development contracts were sole-source, and indeed, awarded without formal competition to the only contractors the Navy trusted to do the job. In keeping with the practice of the day, the larger contracts were by-and-large cost-plus. In thinking about the history of the day, it’s also notable that there was no shortage of steely-eyed missile men willing to work on development projects for good pay. Their slide rules and drafting pencils were also considerably less expensive than CAD/CAM software. Yet despite more-or-less those same pernicious incentives, the first fully-armed ship undertook its first patrol three years ahead of schedule, and at a cost overrun of less than four percent. In today’s context, that’s pretty good.

In his contemporaneous review of the book in Administrative Science Quarterly, James Rosenzweig called Sapolsky’s study “a refreshingly objective appraisal of what has generally been considered one of the nation’s most successful weapon development projects.” That is, in Sapolsky’s estimation, not everything always went well, but a host of factors combined to keep development on the rails. Three were particularly important in explaining what went so well:

One more factor, which Sapolsky didn’t foresee in 1972, helped Admiral Raborn create value without direct competition: the power of past performance. When acquisition officials as savvy as Raborn had a great deal of discretion over contract awards, winners needed to worry much more that failure would have not just current, but future consequences. In today’s more regulated contracting environment, acquisition executives have much less latitude for punishing a supplier for serial disappointment. Back then, the repeat-game nature of contracting could create effective incentives even when the current contract opportunity wasn’t actually competed.

Fairly, singling out the Polaris program is sampling on the dependent variable. While the example is inspiring, the factors behind the biggest success do not point conclusively to the root causes of the failures. And some of the magic can’t be brought back: despite the battle-rattle in the Crimea this week, even the best efforts of QDR-writers can’t conjure up rivals like Krushchev. But in two respects, it’s plausible that what worked for Polaris could work again.

First, inter-service rivalry has clearly gotten a bad name. Enthusiasts for efficiency in allocating resources routinely complain about remaining duplication amongst the services. In the age of the Joint Strike Fighter, though, competition is not what it once was. We are thus pleased to hear that the USAF is not interested in another joint fighter program with the Navy; a recent report from RAND argues that it would have cost more money anyway. Instead, it’s time for the Pentagon to think about more vigorous, dissimilar competition between the services for missions. As with Jupiter and Thor and Titan and Polaris, timely creativity sometimes requires some friction.

Second, moderation in setting requirements for new weapons seems an art lost long ago. Let us not even discuss the Joint Strike Fighter. Of late, we have watched technically overreaching programs like the Future Combat System and the Expeditionary Fighting Vehicle produce nothing but prototypes after years of development and billions of dollars. If the performance of these systems was so important for American security, how has their failure gone hardly noticed in the field? Some failure is to be expected, even when pushing parameters modestly. Bet-the-farm projects with lofty goals make no sense when more manageable targets will suffice. So before the entire investment budget ends up in procurement purgatory, it may be time to dust off Sapolsky’s observations of how success was created almost sixty years ago.