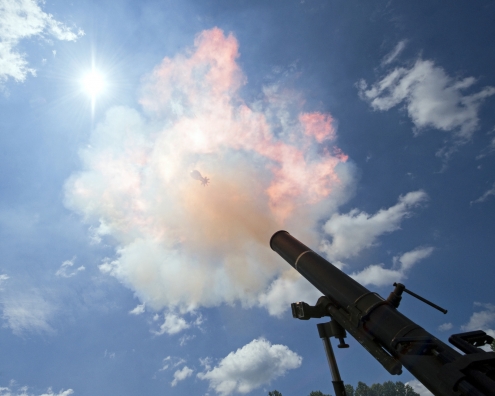 Last week, the Atlantic Council hosted a delegation of the Party of European Socialists for a discussion of the implications of disruptive technologies. Remarks were off-the-record, but my presentation on the implications for European security (one of three from Council senior fellows) should be open for consideration. As my two colleagues spent their time talking about specific technologies, I chose to address the general questions of how new technologies can both pose and solve security challenges, how to recognize when they’re either about to pose a problem or help resolve one, and what policymakers should do about that.

I find these to be important issues because when thinking about security, policymakers rightfully worry about surprise, but they should also think hopefully about opportunity. For Europeans and Americans, technology is perhaps the first field that captures our imagination in this context. So let me provide what the military calls the bottom line up front. Surprise is generated not so much by evolutionary developments as revolutionary ones, so it’s appropriate that we were discussing disruptive technologies. Here, I think three things matter greatly: the operational context of any potential conflict, one’s actual industrial and organizational capabilities for production and employment, and the practical state of the art in the technology.

Of late, we’ve been very interested in how accessible commercial technologies affect the balance of power and the security environment—at the Atlantic Council, we often call this distribution of power for innovation the democratization of technology. It’s just awkward that some of the people who benefit have highly undemocratic purposes in mind. We may not like it, but they will get access. To wit, it’s important to note that some of the most important military technologies in history have been developed for purely commercial purposes. Consider that by the end of the 19th Century, it was not so much repeating rifles and steel cannons but steam engines, barbed wire, and the telegraph that had revolutionized warfare.

Still, success with any technology requires that appreciation of operational context, one’s capabilities, and the practical state of the art. Problems arise in conflict when one doesn’t pay heed. In 1870, the French had the mitrailleuse Gatling gun, but a poor operational concept prevented its meaningful employment. Americans may have invented powered flight, but the French then built the first real military aviation industry. The trouble came in the 1930s, when underinvestment in the industry took the Armée de l’Air into the Battle of France with inadequate machines. And one can push the envelope too soon—the Germans had ballistic missiles and the British heavy bombers, but both were huge drains on the wartime economies which ultimately proved indecisive.

That’s a little history and theory. But what should this mean to the Alliance? Today, the actual threats to Europe are fortunately quite different. We might say that they come along two axes. In the East, today’s semi-democratic regime could evolve into a paranoid and resurgent one. If the probability of conflict is rather low, the potential is still reasonably frightening. From the South, we have an admixture of serious liberals and super-empowered Islamists, some of whom are real jihadists. We probably don’t need to worry about another Battle of Tours (732), but we will probably be worrying in some way for a long time.

Today, we have a usual list of suspects for which technologies people are watching. Some are old but still troubling—this year, Syrian rebels have experienced gas, a weapon unseen in Europe since 1918. Indeed, I suspect that the worst mayhem Europe can feel from the South in the near-term is modest, unless chemical or biological weapons are involved. On the other hand, some threatening technologies are new, but of uncertain effect—the Estonians have already felt the cyber-wrath of the Russians, but in that realm we mostly know what we don’t know. In general, we needn’t recount the rest of the list that generally comes to mind, from additive manufacturing to biological engineering. We read about them every day.

Rather, I think that we should focus more on a single, leading criterion for deciding on one’s level of interest in the military potential for any bundle of emerging technologies. Over recent history, has it consistently surprised you with its commercial and personal utility? Is it consistently finding problems to solve, or is it itself just a technical problem that lacks solution? Consider that for decades, we’ve been hearing about how energy weapons and rail guns could solve our missile defense problems. Can we really convince ourselves that we’ll not be hearing that for more decades yet? The practical state of those arts may have more promise than substance.

Then, to take perhaps the best example, consider what you see every day in the possibilities of electronic navigation, robotics, and what some are calling the ‘Internet of everything.’ We could call this bundle the autonomic future, and the components are technologies in which people around the world, every day, are already mastering operations, production, and the technical state of the art. These technologies are democratically accessible—again, whether or not for democratic intent—for we’ve for some years now what Somali pirates, Afghan rebels, and North African activists can accomplish with satellite receivers, wireless phones, and Twitter. The question is who is likely to make better use of that bundle in the future.

Here, I’m betting on Europeans. I’m betting on North Americans too, but Europeans could use the pep talk today. Whatever the overhang from longstanding financial problems, the historical success of enterprises from Airbus to Ericsson indicates that Europeans can master complex technologies whether moving first, second, or even later. Europe’s security problems are frankly pretty manageable on its admittedly modest funding, and some free-riding on those free-spending Americans. It’s simply that European problems would be yet more manageable were the money spent more wisely.

It’s also easy to get on the wrong side of that problem. This week the Wall Street Journal lamented European under-investment in drone aircraft, and quoting European industry’s complaint that ministries are just buying off-the-shelf from Americans and Israelis. But I ask, is that really a problem? European countries aren’t in the habit of investing across the board, and shouldn’t be, as they lack the political will for that kind of money anyway. For that matter, with not-so-existential threats to the east and south, they probably lack the reason for it. But European governments have been in the habit of duplicative technological investments, for their countries have the industrial capabilities to bring those about when ordered. The A380 and the Galileo system have been engineering triumphs, but their value will accrue as much to Americans and yet more to others.

In the next round, as European ministries consider targets for investments in security technologies, I recommend a differential approach. Ask what matters more to Europeans, and what Americans and others aren’t producing. In the Cold War, for example, the Swedes could not interest the Americans in shallow-water anti-submarine technologies, and so had to build their own industry—and very effectively. Today, I particularly like what’s being done in France and Germany with soldier systems. Frankly, further investment here should appeal to European sensibilities. It’s a human capital approach.

Like their American comrades, European soldiers are valuable, whether socially for the low birth rate and the value of human life, or individually, for all that spirit and the right training can accomplish. Caring for every additional one of them on campaign is costly, as we’ve seen for twelve years in Afghanistan. The Americans solve these problems with the brute force of logistics, but Europeans might address the issue by enhancing the combat and peacekeeping potential of every additional frontsoldat with autonomic independence embedded in deep interoperability. Those sorts of investments might more directly address those pointedly European ambitions for security policy, yet within the context of an enduring Atlantic alliance.