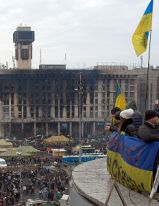 Ukraine is the world’s fourth-largest arms exporter. That isn’t useful right now against Russia, but it may be someday.

News from Crimea over the past month has been endlessly surprising, but often missed is a surprising industrial fact: Ukraine currently ranks as the world’s fourth-largest arms exporter. The local industry had a blowout year in 2012 (the latest estimated by SIPRI), selling over $1.3 billion in weapons and related products abroad. All that military-industrial output hasn’t sufficiently encouraged the new government to put up a fight against Russia, the world’s second-largest arms exporter. But with the right encouragement from NATO, it may prove valuable in the long run.

In Europe and North America, the Ukrainian industry is known first for Antonov, maker of the world’s largest transport aircraft, on which NATO has relied heavily for moving outsized loads in and out of Afghanistan and other places. Zorya Mashproect notably builds marine gas turbines—and remarkably, for the Russian Navy too. But Ukraine’s arms business is substantially the heavy kit of ground combat, including T-84 tanks, BTR-3 and -4 armored personnel carriers, Smerch rocket launchers, howitzers, automatic grenade launchers, anti-tank missiles, and machine guns.

That could sound like industrial might worthy of a land war against Russia, but the industrial output hasn’t been available to the Ukrainian Army. For over twenty years, the almost entirely state-owned industry has sold weaponry all over the world, but hardly at all to its own government. Total military spending in 2012 was only about $1.9 billion, and investment a tiny fraction of that. According to Sam Perlo-Freeman of SIPRI, the government is actually spending more on military pensions than on the active force.

The problem for Ukraine is that its post-Soviet arms bazaar never really stopped. The business model broke sharply with Cold War practices: output was no longer meant to cement socialist alliances, or even to defend the state, but simply to make money. Under the recently departed regime, who was buying didn’t much matter. In 2008, a shipment of 33 refurbished T-72s to South Sudan (via Kenya and an encounter with some Somalia pirates) particularly annoyed Washington, as it came in the midst of a civil war. Then there was the issue of those missile components going to Iran.

Now, despite all the stirring images of Maidan, it’s becoming clear that the world’s first-ranking arms exporter, the US, isn’t going to do much about the crisis militarily. Never mind numbers five through nine—Germany, France, Britain, Italy and Spain. But as Mark Safranski wrote earlier this week at War On The Rocks, it may be sensible for everyone to “Slow Roll Any Moves Toward Crimean War II”. In the longer run, as he continues, Russia’s apparent coup de main may be no coup for Russia at all. What Moscow describes as the ‘coup’ in Kyiv will remain a fact on the ground, and the government there may be rather driven into the arms of NATO and the EU. Whether or not this means near-term membership in either organization, cooperation should increase dramatically.

That cooperation should include a military-industrial dimension. All this evidence of impotence may be taken to suggest that a top-ranking arms industry is little measure of military power. That might just be true when the industry is egregiously misused, as it has been in Ukraine. But when actually put to strategic use, the industry can have real strategic effect.

Observe how Ukraine’s factories beat some of the world’s leading land warfare equipment suppliers in big sales to countries like Thailand and Iraq. For all the complaining across Europe and North America, money in many parts of the world is actually much tighter today. The Ukrainian industry has a clear value proposition: labor costs are low, and surplus inventories (at least for now) are huge. For a First World fight, though, the products need a little boost. As armies all over NATO have learned over the past twenty years, old metal can be re-bent and stuffed with the latest electronics. The Israeli firm Elbit has made a particularly good business of upgrading old Soviet equipment in this time, and this is entirely what the Ukrainian Army needs.

Whatever happens, Ukraine will need to rebuild its long-neglected defenses towards the east—just on the cheap. My Atlantic Council colleague Ian Brzezinski has recommended “Four Steps NATO can Take to Support Ukraine” in the short run, with free weapons and sensors, and backstopping by the NATO response force and Mediterranean fleets. In the longer run, though, there are yet more ways the Atlantic community can help the Ukrainians help themselves:

First, when Kyiv comes calling with an export license request, expedite the process. While one can be reasonably concerned about where all the Russian sympathizers are, the Ukrainians need technology that’s at least as good as the latest Russian stuff.

Second, specifically encourage companies in the west to get involved with the Ukrainian firms. As Byron Callan of Capital Alpha recently wrote, just “forget about notions of Ukraine in 2015–17 buying F-16s or F-35s.” The solutions must be cost-effective on an Eastern European scale. Quite a few companies learned how to do this years ago, working with post-communist enterprises in Poland and the Czech Republic.

Third, don’t just renew the Strategic Airlift Interim Solution (SALIS) contract with Antonov when it expires at the end of the year. Expand it well beyond the six huge aircraft it provides. Kyiv needs the money, and trade beats aid most days. In keeping with Western sentiment to punish Russia commercially, work to disentangle Volga-Dnepr Airlines from that relationship. Make this an exclusively NATO-Ukrainian show. That’s far less provocative than a security guarantee, but it’s more than a signal.

None of this is going to recover Sevastopol tomorrow. But in the long run, upgrading industry in the East with help from the West should again be a strategic priority. This time the work is not about defense conversion or a peace dividend. It’s about holding the line against a blatant transgression of a European country’s territorial integrity.

James Hasik is a senior fellow in the Brent Scowcroft Center.