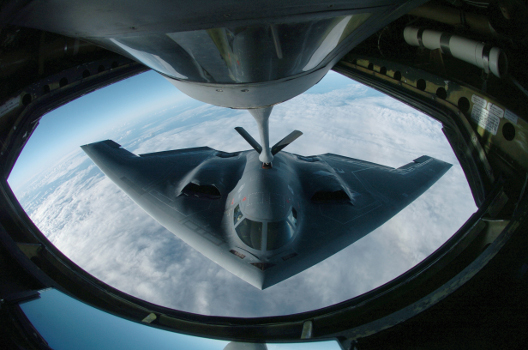 News of Northrop Grumman’s stealthy RQ-180 drone aircraft, revealed just yesterday by Aviation Week & Space Technology, may be of more than tactical significance. As our friend Byron Callan argued immediately thereafter in a report for investors, it provides an industrial signal as well: competition in fixed-wing military aircraft is still vigorous in the United States. If Northrop can make the RQ-180 all on its own, its position in the hunt for the Long Range Strike Bomber (LRS-B) contract may be more impressive than has been feared.

Northrop built the B-2A, of course, and undertook the upgrades through Block 30. But much has been made of how Northrop hasn’t built a new manned jet since 1997, when the last bomber rolled off the production line. The plant was shut down and dismantled, a shopping mall was built in its place, and the facility has been gone long enough for a Borders Books to open and close there. Still, in 1998 Northrop started building the rather large RQ-4 Global Hawks, and has maintained other production expertise with work on the F-35 program. The RQ-180 indicates that the company clearly has been busy in the design department too. It seems now that a high level of confidence accompanied Northrop’s confirmation last month that “we’re going to compete” for the LRS-B.

Here at the Atlantic Council, we had been a bit worried. Earlier this year, we debated the long-term significance of Lockheed Martin’s decision to team with Boeing in its bidding for the LRS-B. Boeing, it’s easy to point out, has never built a stealthy airplane in serial production. But the company does build lots of large aircraft every year, and retains plenty of design capacity for drones, as evidenced by its Phantom Ray demonstrator and its interest in the US Navy’s UCLASS program. As such, one of my colleagues here termed the Pentagon’s lack of reaction to the tie-up “very bad industrial policy, if the acquisition strategy permits this.” In short, we imagined that Boeing could be relied upon for a credible bid, all on its own.

Looking closer, it’s important to recognize that the deal with Fort Worth put Saint Louis clearly in the lead: Boeing is to serve as the prospective prime. With F-15 and F-18 production probably ending sometime between 2016 and 2018, Boeing’s position in the industry looks superficially shaky. Frankly, Lockheed may have been seeking to reassure the Defense Department that it was not walking off with the entire combat jet aircraft business in the United States. But with projects like those of the UCLASS and the RQ-180 rolling along, we imagine that it’s not. Boeing and Northrop and even General Atomics are very much in the game.

Programs such as these naturally keep more players interested simply because they occur more often. David Axe suggested last year that Lockheed Martin may have built only about 20 RQ-170 Sentinels—the type of drone that was lost two years ago over Iran. Callan hazarded the guess that Northrop could build “eight to twelve” RQ-180s for about $100 million each. A billion dollars is almost real money in the Pentagon, but it’s not Joint Strike Fighter kind of money. If aircraft production at that scale is economical, then a quicker cycle of innovation can be maintained, with more eagerly competing contractors sustained.

We are naturally aware that there are scale and scope differences between big bombers and drones. But as Callan observed, that’s only so if the LRS-B remains a ‘B’. Computing advances are moving fast, and even if software technique lags greatly, it will eventually catch up. With air defenses possibly moving with Moore’s Law, but stealth techniques baked in at birth, a manned, penetrating, big bomber might not be survivable a decade after it’s built. As we wrote earlier this week, the expense of that project may lead Defense to reconsider, and to invest instead in smaller, more manageable projects, like drones and cruise missiles. Unmanned aviation remains a sector in which the customers’ needs are rapidly evolving, the production runs are relatively short, and tomorrow’s state-of-the-art is yet unknown. Taken together, that’s a prescription for healthy competition, rapid technological advances, and reasonable prices.