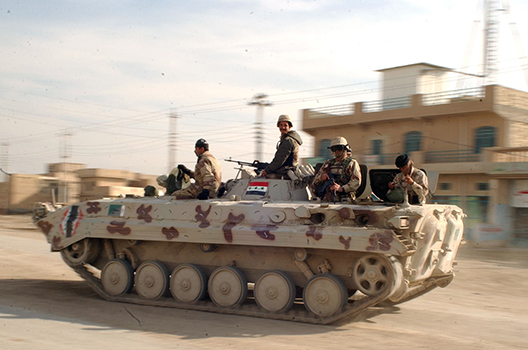 Political change must precede successful assistance from the west.

The collapse of the Iraqi Army last month did seem shocking: eight hundred gunmen from the jihadist group formerly known as ISIS, armed with nothing heavier than a DiShKa on a technical, somehow routed two Iraqi divisions in just days. As I noted last weekend, Prime Minister Nouri Al-Maliki blames this fiasco on tardy deliveries of fighter jets from the United States. Whether or not a squadron of high-flying fighters would have much mattered, there have been plenty of other efforts to assign blame. Last month, Kevin Sullivan and Greg Jaffe of the Washington Post called the defeat “a failure for nation’s premier and for the U.S. military” that trained his men. Yet despite all the help coming from the Iranians and the Russians, and for all this complaining about the Americans, the latter are still regarded in Iraq as almost indispensable. Lt. General Qassem Atta, the new Baghdad Bob, has been openly pining for a “true intervention” by the US.

A few months prior to this Iraqi collapse, the Ukrainian Army gave up Crimea to Russia’s little green men with but a single fatality. Today, the Army is having serious problems routing less organized guerrillas from the eastern provinces, and the Air Force has been having trouble staying in the air. All the while, the government in Kyiv has been begging for more help from the US than cartons of MREs, and there is some sympathy for their case in points west.

So, could another round of assistance be made to stick this time, in either Iraq or Ukraine, in a way that it didn’t through 2011? It’s a pressing question, and my colleague Sean McFate will be talking on the subject later this month across town at the Cato Institute. But the answer is hardly clear. Both armies had been trained to various degrees by the US Army and Marine Corps, and both had served alongside American troops in Iraq. The trouble is that the capacity of these two armies to absorb even basic lessons may have been sharply limited, and by political conditions not fully in their control.

In a video from 2008 of a profane training session (as Tyler Rogoway recalls at Foxtrot Alpha), one US Army officer reminds the Iraqi Police under his charge that American patience is limited: “I will not help people who will not help themselves.” More sober, but just as damning, was the editorial in the Washington Post by Robert Scales, a retired major general and former commandant of the Army War College, on how “U.S. soldiers watch as Iraqi comrades struggle against ISIS”. He attributed much of the problem to “the horribly corrosive process of purging Sunni officers” that Mr. Maliki’s cronies undertook after 2011. Chronic misunderstandings of what matters in warfare don’t help. It’s all fine and nice to buy a fleet of Abrams tanks. But if you don’t buy the accompanying logistics and maintenance package (as the Iraqis brushed off), it’s hard to get those tanks out of the garage and into battle when you need them. Tanks and fighter jets, though, bring a prestige that spare parts and training don’t, and so they get bought around the world.

Similarly, rampant corruption crushed the combat capacity of the Ukrainian Armed Forces before they even got organized as such. As the memorable movie line went, at the end of the Cold War, there was “nothing better for an arms dealer than disgruntled soldiers and warehouses full of weapons.” As political choices in the country often seemed to vary between “bad and very bad,” the selloff of state property continued unabated through almost the very present. As I noted back in March, according to the Stockholm International Peace Research Institute (SIPRI), Ukrainian firms sold more than $1.3 billion in weapons and related products in 2012. The Army remained impoverished for two decades, but more than a few dachas were built with the proceeds.

As McFate writes in his recent monograph on the subject, building indigenous military capability can be essential for stability and security, but “recent events in Mali, Libya, Syria, Afghanistan, Iraq, and elsewhere demonstrate that few success stories exist.” And yet there are indeed a few. As I heard one American general say just this morning, the Salvadoran troops who fought so well in Iraq from 2003 through 2009 surprised the American generals who, as lieutenants and captains, had helped train them in the 1980s. As Marine Corps Times noted earlier this week, the Colombian Marines that the USMC has helped train over the past twenty years have gotten so good themselves that they’re now training the Hondurans. And recently, a large industry has grown up to support efforts like these. As McFate lays out in his book, it was DynCorp that rebuilt Liberia’s armed forces “from the ground up” after the end of the civil war in 2003.

All those efforts have been relatively successful, but almost certainly wouldn’t have been twenty years prior, when the political conditions were lacking. In this context, it may seem remarkable that ISIS somehow learned to shoot, move, and communicate, all without their own Americans to help. ISIS may be incomprehensibly brutal, but it has not been as demonstrably kleptocratic as its immediate competitor. As I heard another think-tanker put it this morning, institution-building is only so effective when the politics of a country is rotten to the core.

James Hasik is a non-resident senior fellow at the Brent Scowcroft Center for International Security.