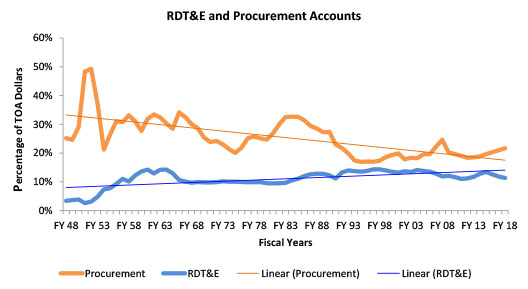 No peace dividend for you: US military spending plans are sharply reducing RDT&E spending relative to procurement

Austerity in defense spending may very well decrease military spending on research, development, testing and evaluation (RDT&E). As robust RDT&E spending has long been important to US military capabilities, we should think seriously before cutting these accounts.

From the beginning of the Cold War through the 1990s, American demand for increasingly technologically advanced weapons drove RDT&E to an increasing role in force modernization. During that time, the Department of Defense experienced several sharp shifts in political priorities and financial resources, and each time altered its plans to meet those demands. But while procurement spending waxed and waned with trends in defense overall, RDT&E spending was far more stable.

This is because RDT&E constitutes an investment in future procurement. But each succeeding generation of weapons, it seems, has required a greater upfront investment before full-rate procurement could begin. As a result, and as shown in the graph, RDT&E spending has steadily increased relative to procurement spending since the 1940s, and particularly when threats have been low relative to spending power. The peak was reached in relatively peaceful and prosperous 1997, when RDT&E spending was approximately 85 percent of the level of procurement spending.

More recently, though, the relationship has fluctuated. Initially, the wars in Afghanistan and Iraq produced only a slight increase in procurement, because the Congress and the Defense Department believed that the wars would be relatively short. As the wars progressed and the Coalition endured greater casualties, procurement increased—in fiscal year 2008, RDT&E consumed only 45 percent of the dollars that procurement did.

Now, at the conclusion of over a decade of wars, priorities are again changing, and spending is again sliding. But contrary to the historical trend, and as seen at the far right of the graph, the administration’s defense plan calls for RDT&E to drop considerably relative to (increasing) procurement spending. Some portion of this trend is attributable to the transition of the Joint Striker Fighter, a massive program, into full-rate production.

The sophistication of some of these current programs is impressive. But longer-term programs are often unable to meet emergent capability gaps. Due to the extensive time period between initial capability requests and the deployment of the systems and equipment, these programs are often challenged by changing political demands and security developments. Safeguarding RDT&E should thus seem logical, as an investment in options for future capabilities. But broadly stated, this budget offers no ‘military’ peace dividend, as a downpayment against possible long-term threats.

Rather, RDT&E spending must stay resilient to economic austerity. As cuts remove personnel and existing equipment from the force, a robust defense-industrial RDT&E establishment must be preserved to close whatever capability gaps may arise. If systems and equipment are not properly researched and vetted, programs will be delayed and costs will swell. To maintain its readiness across time, while at the same time reducing its size, the US must modernize with immediate, midterm, and long-term RDT&E and procurement projects.

Kristin Oakley is an intern at the Atlantic Council. This essay draws on her recent work with Andrew Bissett, Jemakai Blyden, Elizabeth Irwin, Justin Painter, and Devin Townsend at Syracuse University’s Maxwell School of Citizenship and Public Affairs.