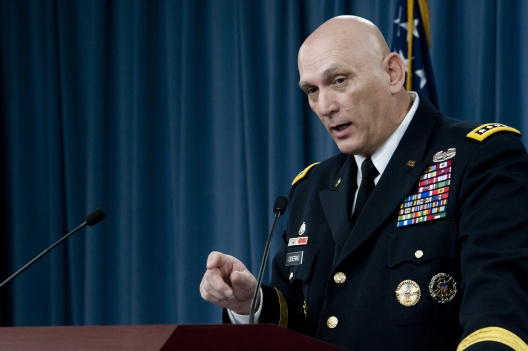 I mentioned Apple and Microsoft the other day, in the context of innovation, and writing that reminded me of another useful comparison in defense.

Microsoft CEO Steve Ballmer announced his pending retirement back in August, and in the week thereafter, a slew of periodicals wrote about how his departure couldn’t possibly be bad for the company. Perhaps most salient was Derek Thompson’s face-punch in The Atlantic by the title “Why Steve Ballmer Failed.” For the past ten years, he wrote, Microsoft’s stock (NASDAQ:MSFT) “has functioned like a thermostat set to $25.” The world had changed, most of the stories went, and despite some successes with XBoxes and server-side software, Microsoft had repeatedly missed opportunities to change ahead of it. Reaction, the company could manage, but buying most of Nokia would still bring it no iPhone, or even a Samsung Galaxy. As Christopher Mims at Quartz put it, Microsoft today remains a “pile of vaguely related businesses” without a clear vision for its future.

Those arguments led me to think of another American senior executive with similarly big problems on his hands: General Ray Odierno, chief of staff of the US Army. What do they have in common, you wonder, other than their shiny heads and loveably awkward mannerisms? Two things, I suggest, both deeply harmful to their organizations:

First, they both preside, perhaps unwittingly, over dreadful human resource systems. As Mims openly hoped, Ballmer’s departure “could unlock the talent and resources now dormant” at the company. Will Oremus at Slate squarely judged the constraint to be the “poisonous employee-ranking system” borrowed wholesale from General Electric, another firm whose shares have consistently underperformed the equities markets. And where did big American companies get the idea that rack-and-stack personnel systems were sounds management ideas? From the American military, which over a century trained millions of managers (officers and NCOs) for wars hot and cold.

The trouble is that forced-rankings and lock-step advancement systems haven’t worked well there either. Tim Kane, our cross-town colleague at the Hudson Institute, recently argued this case forcefully in his book Bleeding Talent: How the US Military Mismanages Great Leaders and Why It’s Time for a Revolution (Palgrave Macmillan, 2013). The Army’s way of recruiting, training, retaining, and promoting troops and officers remains built on a model of mobilization from the Second World War, but the wars the Army has found itself fighting of late have been radically different.

But Microsoft and the Army are not just getting people wrong. The second problem is that they have also both been spending billions in unproductive R&D monies defending current but unhelpful positions. As Keith Nichols of IT analysis firm Cambashi wrote at The Manufacturer this past week, with R&D, “it’s not what you spend, it’s the way that you spend it.” Back in 2010, Microsoft was spending about 12 percent of revenues on R&D, while Apple was spending a mere 2 percent. What the former got for its exertions was the Surface tablet and Windows 8.

To extend the analogy to the Army, one might call the Windows 8 strategy–laptops, tablets, phones and everything all running the same software—the Future Combat System (FCS) of consumer software. Remember that before the FCS was shot in the head by Defense Secretary Robert Gates in 2009, the program had spent six years developing a single design to replace the essentially Army’s entire inventory of armored vehicles—without bothering to consider the threat of land mines and roadside bombs in Iraq and Afghanistan. The world had changed, and the institutional Army somehow hadn’t noticed. But the problem was broader than that: the Army’s own study of the problem concluded that its overall weapons acquisition efforts had been “ineffective and inefficient“, spending some 25 percent of the service’s R&D budget on programs that would ultimately be cancelled.

Yet worse, while the problem in the military is acute in the Army, it’s deep resident across the US Armed Forces. As such, perhaps it’s time to lament the departures of those two Gates, Bill and Bob, from their respective iconic American organizations. For while Microsoft and the Pentagon seemingly draw steady revenues from desktop software and the public’s deference towards defense spending, both are declining lines. The ways of the world are shifting decisively to distributed computing and distributed violence. In the latter case, though, a decade of war in Afghanistan and Iraq has sapped public enthusiasm for military solutions to political problems—and acutely if that is to involve actual boots on the ground. At Microsoft, Bill Gates remains chairman of the board, but he is no longer Gates the chief software architect, who in that latter role could spur new thinking whatever bean-counting Ballmer was doing in the front office. At the Pentagon, the firm hand that Bob Gates could provide to the chiefs, winding up financial fiascos and reassigning roles, has been succeeded by somewhat less active management.

Today, Microsoft’s thermostatic share price and the Army’s strategic drift are each emblematic of institutional decline. So how do these organizations climb out of their respective holes? For both, the managerial problems in personnel and materiel are intertwined. It’s just worse for the Army that public finances are currently very challenging. So before the force is broken, as the institutional details of sequestration threaten, some breakthrough thinking would be handy. But as with Microsoft, new thinking in product development is not encouraged by a personnel system that acutely punishes failure. With the wars of the strategic corporals and captains ending—and possibly just for a time—the Army still lacks institutional arrangements and structures that would encourage its best, brightest, and most innovative to stay on. As business writers argued regarding Microsoft last month, I argue for the US Army: fix the staffing system, and you’ll be a long way towards fixing the whole.

Image: Chief of Staff of the Army, General Ray Odierno, briefs the press at the Pentagon in Washington D.C. on January 27, 2012. (Photo: Flickr/Secretary of Defense/CC License)