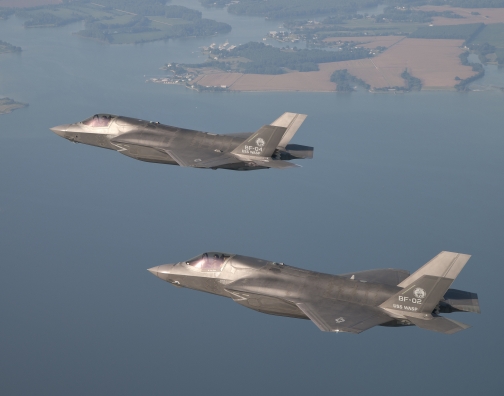 For several years now, we’ve been hearing a chorus of laments about how military contractors have been deploying their excess cash. Heck, we’ve probably contributed to that noise on occasion. For some time now, seemingly the reflexive choices have been dividends, special dividends, and share buybacks—all means of returning that cash to shareholders. While this attention to the owners is laudable—it’s certainly better than feather-bedding or empire-building—it’s hardly investment in the enterprise. To the contrary, it’s a sign that management believe that their average investment opportunity available to the average shareholder is better than what they’ve got available in the company. As the tendency towards managerial hubris is empirically sound and well-documented, such a frank admission likely supports a stark conclusion: the defense industrial base is not an attractive investment.

Of course, if one considers the American arms and aerospace industries relative pillars of Western security, that’s hardly what one wants to hear. Fearing for what this portends, even senior officials in the Pentagon have been complaining of late, and this past week, at the Air Force Association (AFA) conference, the USAF chief of staff issued an appeal to his suppliers: invest in affordability. Invest your own money in affordability. Make this your top investment priority. Help us in the military “break the price curve,” and we’ll together find a more affordable future.

Think for just a moment about why management, agents of the owners, would pay heed. As legendary financier Lawrence Garfield once observed, it’s for one goal: “making you money. And lest we forget, that’s the only reason any of you became stockholders in the first place. You want to make money.” So how does the chief’s proposal work for them? In one of two ways.

Investments in affordability could appeal to a contractor if, by lowering the price of products, he could expand the market. It’s a simple proposition. Consider how Apple sold millions of iPad by packing more functionality into that tablet at a more reasonable price than anyone had done before. If it’s a sufficiently good deal, buyers will spend their money in that field, rather than in another, and ultimately, the whole industry gets pulled along. (Even Microsoft sold a few of those Surface things.)

In defense, the problem with this approach is the rigidity of budget constraints. As the old line goes, we have not so much spending plans to meet our strategies as strategies to meet our spending. In our line of work, consider how this is proceeding with the Joint Strike Fighter: the Canadian and Dutch governments are explicitly buying-to-budget. As the price has risen, they’ve held to the outlays they’ve planned, and just cut the quantities demanded. In many of the big cases, making weapons more affordable doesn’t affect the total revenues the contractor anticipates, so the incentives are questionable. Worse, tinkering with designs necessarily introduces technical risk, so if actual financial rewards are not dangled, action may not be forthcoming at the pace demanded, whatever is said publicly to customers.

Alternatively, one could say, the heck with expanding the pie, let’s just grab a bigger share of it. That’s using affordability to increase one’s market share. It’s arguably what Textron and AirLand are trying to do with their new Scorpion reconnaissance-attack jet, which garnered considerable attention at the AFA’s attached trade show. As Aviation Week opined last week, this Cessna-derivative is meant to “fit below the close-air-support A-10s and F-16s, but above light-attackers like the Super Tucano and ISR platforms, such as the twin-turboprop King Air.” In short, to take business from Lockheed, Embraer, and Beechcraft—regardless of how many aircraft are bought wherever.

Here again, things don’t always work that way in defense. Textron’s self-funded initiative is remarkable in part because it’s relatively novel: one has to think back to Northrop’s ill-fated F-20 Tigershark project for a similar idea in aerospace. Fairly, there are better examples in land and sea systems. MOWAG and its later owners, for example, made a bundle from its wheeled LAV series, which took great share from a host of tracked vehicle manufacturers. But for the Pentagon to convince its suppliers that their money would be well spent, its officials would have to signal a willingness to actually buy the things they develop on their own, instead of what the incumbents have developed with the Pentagon’s funding. For Andrea Shalal-Esa wrote the other day, without a hint of irony, “there is a limit to how much of their own money [executives] can spend before shareholders demand a return of some kind.” The private sector, as Ray Stance once said, actually expects results. For government, admonishment should not be a strategy, unless there’s a credible commitment behind it.

James Hasik is a senior fellow with Brent Scowcroft Center on International Security.