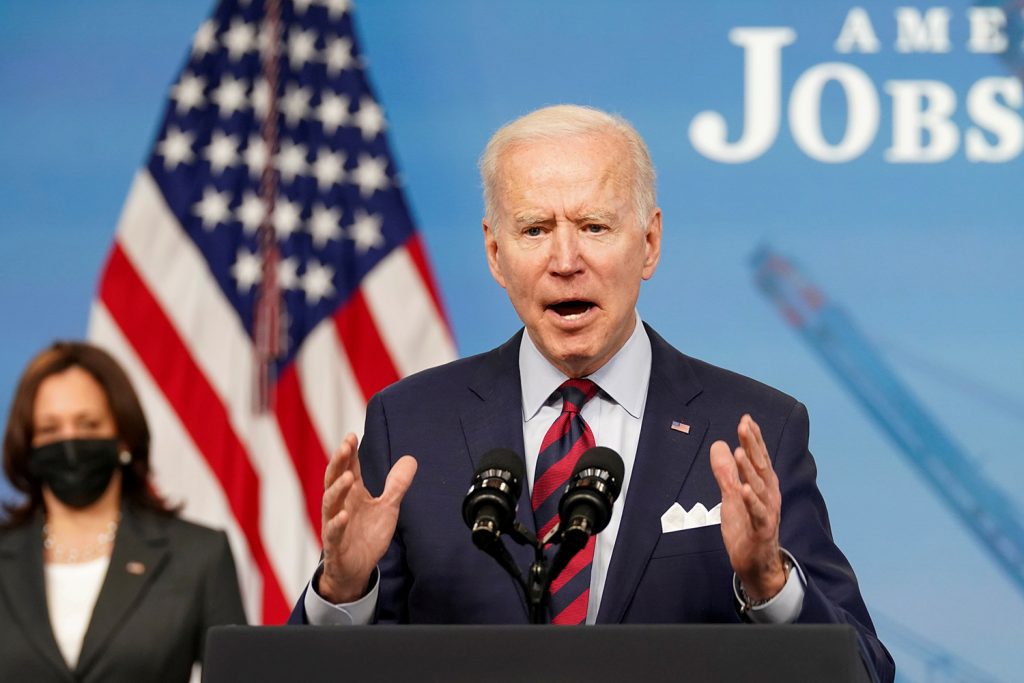 It is hard to overstate the audaciousness of US President Joe Biden’s first one hundred days in office, which will be marked April 30. Behind it lies a presidential ambition to recharge America while at the same time improving the United States’ odds in its escalating contest with China.

Biden’s boldness can be measured most graphically by the numbers: the four trillion dollars and counting that he hopes to generate to finance an American pandemic rebound, a surge in US jobs and growth, and a mountain of national infrastructure investments (defining “infrastructure” liberally).

Never in my memory has any US president so closely associated domestic investments with US global standing—and now he is acting on that conviction.

Biden made sure no one missed the connection to China when he rolled out his infrastructure spending proposal this week, which he called “the single largest investment in American jobs since World War Two.”

Asked Biden, “Do you think China is waiting around to invest in this digital infrastructure or in research and development? I promise you, they are not waiting, but they’re counting on American democracy to be too slow, too limited, and too divided to keep pace… We have to show the world— and much more importantly, we have to show ourselves—that democracy works; that we can come together on the big things. It’s the United States of America for God’s sake!”

Biden administration officials, who are veterans of the Obama years, say they are acting on several lessons: Don’t be distracted by cable-television criticism of your plans, don’t be thrown off by economists, don’t count on bipartisan support, and don’t set your sights too low.

A down payment for the future of the United States

“Go big or go home,” one former Obama official said to me, summing up the attitude driving Biden’s first one hundred days. That has been made easier to achieve due to the Democrats’ continued control of the House and de facto hold on the Senate with a fifty-fifty split—and, where necessary, a tie-breaking vice presidential vote.

Biden first showed how big he was willing to go through the $1.9 trillion American Rescue Plan, passed in early March, one of the largest economic stimulus bills Americans had ever seen. It was far more than Republicans, or many economists, thought necessary, but Biden had the votes.

Then this week he rolled out plans for $2.3 trillion in infrastructure spending. Define that term to include everything from bridges and broadband networks to spending on the elderly and educating the young. As with the first bill, expect this one as well to pass largely along partisan lines.

The mistake many of Biden’s critics make is concentrating on the head-spinning numbers—instead of the breathtaking politics.

Think about all these trillions less as a boatload of money than as Biden’s down payment on securing America’s place in the world, his place in history, and his party’s re-election. Over the short term, that means enough Americans see results to ensure midterm elections in 2022.

Seen that way, what may seem to fiscal conservatives to be reckless economics seems prudent politics to the Biden team.

In some respects, what Biden is doing is leveraging his luck. Though Biden has suffered a great deal of misfortune in his life, both personal and political, the stars have been aligned since his election.

Recovery from COVID-19 this year was inevitable, but his administration’s disciplined management of vaccine distribution has accelerated the process and his political standing. Biden last week moved the deadline for all adults to be eligible for the COVID-19 vaccine to April 19.

An economic rebound this year also was inevitable, but the Biden administration’s stimulus measures are likely to result in, according to International Monetary Fund projections, 6.4 percent growth this year, the highest since 1984, and then 3.5 percent in 2022.

It remains to be seen how much economic and political momentum four trillion dollars (with more to follow) can buy. However, J.P. Morgan’s Jamie Dimon reckons that vaccines and deficit spending could bring a US economic boom that could last through 2023, which is beyond the midterm elections in which the Biden team knows victory is crucial to their larger aims.

It is also hard to know what impact this will have on China, but thus far the contest between Beijing and Washington has been sharpening in the early weeks of the Biden administration.

International visitors to China over the past years have noticed an increasing confidence among Chinese leaders of the inevitability of US decline and of their rise.

Many Chinese actions at home and in the world—the bullying of international partners, the building out of South China Sea islands, the reversal of Hong Kong’s democratic freedoms, and increased threats to Taiwan—all reflect that confidence that they could act with relative impunity and modest cost.

China also is wagering that because many of the United States’ most valued allies and partners—Japan, South Korea, Germany, and the European Union as a whole—have China as their number one trading partner, they will be reluctant to join any common cause against Beijing.

The bitter exchanges at the first face-to-face meeting of Chinese and US leaders in Alaska underscored how difficult it will be to manage an increasingly combative relationship.

Perhaps the most compelling reason for Biden to combine his domestic and international goals is that he is far more likely to find political consensus around the need to confront China than for any of his spending plans on their own.

Before Kurt Campbell joined the Biden administration as the National Security Council’s Indo-Pacific coordinator, he wrote with Rush Doshi, who is now director for China in the NSC, that the Chinese challenge could be a blessing in prompting the United States to make the investments that would be prudent in any case.

“The path away from decline… may run through a rare area susceptible to bipartisan consensus: the need for the United States to rise to the China challenge,” they wrote.

“Joe Biden didn’t wake up one day and realize he’d been wrong for 30 years,” begins Ezra Klein, in his compelling effort to “understand why President Biden is making such a sharp break with Joe Biden.”

To the surprise of many, Biden, widely regarded as a moderate pragmatist, has released one ambitious plan after another.

Klein offers several explanations for Biden’s newfound “radicalism.” They include a shift against thinking that bipartisan negotiations can produce results, a new generation of government officials with different economic ideas, and Biden’s knack for understanding when political winds are shifting—this time in favor of bigger government.

“His administration is defined by the fear that the government isn’t doing enough, not that it’s doing too much,” writes Klein. Read More →

On the front page of its Sunday edition, the Washington Post provides a rich, detailed look at Russia’s steady massing of its largest military presence in years near the Ukraine border. For now, Western and Ukrainian officials believe this is more a show of clout than a looming military offensive.

“But moving forces from as far away as Siberia—more than 2,000 miles distance—to near Ukraine and onto the Crimean Peninsula has injected new levels of alarm in a region that has been a flashpoint between the West and Moscow since 2014.” Read More →

General Wesley Clark, former supreme allied commander Europe and Atlantic Council board director, argues in Washington Monthly that America’s best response to its global challenges, China chief among them, runs through a strengthened “values-based partnership” with the EU and the United Kingdom.

Writes Clark, “Allies can potentially offset the weight of China’s huge population and formidable economy, with everything that entails in terms of talent, attractive markets, and investible surpluses.”

Even more important, he writes, “Authoritarian demagogues, both domestic and foreign, are testing American and European commitment to democracy. We need to partner with each other to save this system of government—and ourselves.” Read More →

Most Americans knew very little about Prince Philip, who died this week at age ninety-nine, before he was so richly humanized as history’s longest-serving Queen’s consort by the Netflix series, “The Crown.”

Writing in Politico Magazine, Otto English—the pen name for British writer Andrew Scott—describes why it is that “the central characters in the House of Windsor soap opera are rarely as interesting as the people who marry in.”

“The core family members, born to privilege, are conditioned and raised to be dull,” he writes. “It’s the incoming husbands and wives who are relied upon to bring color. And long before Meghan and Diana were the stars of ‘the Firm,’ it was Prince Philip who livened things up.”

Tobias Menzies, who played Philip in later seasons of “the Crown,” sent him off by quoting Shakespeare’s As You Like It in a tweet: “‘O good old man! How well in thee appears [the] constant service of the antique world’… RIP.”​​​​​​ Read More →

#5 Surviving the Crackdown in Xinjiang
Raffi Khatchadourian / THE NEW YORKER

This week’s must-read is a New Yorker opus by Raffi Khatchadourian on the mass detentions, crackdown, and genocide in China’s Xinjiang province—an area the size of Alaska—as seen through one woman’s extraordinary struggle to free herself.

The author masterfully weaves the evolution of China’s actions against its Muslim minority with the improbable story of Anar Sabit, an ethnic Kazakh who had migrated to Canada in 2014, only to fall into Chinese authorities’ hands on a visit “home” after her father’s passing in 2017.

The reader is left with a deeper, darker understanding of the multi-layered Chinese surveillance regime, told through this young woman’s recollections, which she put in writing because she found that “it helped her overcome her trauma.” ​​​​​Read More →

The case for a global minimum corporate tax

As policymakers around the world consider a global minimum corporate tax, it is important to understand the context behind the concept and how this tax might actually work.

Image: US President Joe Biden speaks about jobs and the economy at the White House in Washington, U.S., April 7, 2021. REUTERS/Kevin Lamarque/File Photo