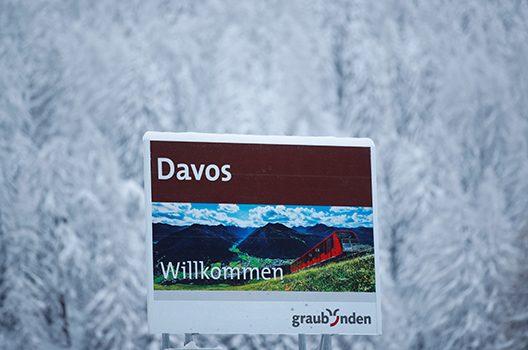 “Can the United States and China be strategic competitors and strategic cooperators at the same time?” Hadley asked. “It’s what the world requires, but it’s also never been done before.”

In some 25 years of attending Davos, first with the Wall Street Journal and now at the Atlantic Council, I’ve never sensed such concern among its attendees about emerging risk: Political, economic, societal and climate. Most crucially, worry is growing over how emerging technologies – and the Sino-U.S. struggle for their commanding heights – will define or disrupt the industries and countries they inhabit.

Characteristically, World Economic Forum founder Klaus Schwab is appealing to his 3,000 participants to mold that uncertain future, representing as they do some of the most influential political, business and civil society actors of their times.

Yet the past week’s news captured some of the difficulties Western leaders face in shaping that future. The parliamentary defeat of Theresa May‘s Brexit plan and President Donald Trump‘s continued U.S. government shutdown have underscored the political ferment that will infect Western democracies for years to come. Both leaders cancelled their participation at Davos to deal with their immediate concerns at home.

The past week’s stories that got more of my attention, however, were the latest, contradictory episodes of the generational Chinese-U.S. drama as framed by Hadley.

On the positive side, news leaks suggested China was offering to settle its trade dispute with the U.S., through an epic offer to buy more than $1 trillion of goods. On the negative side, U.S. federal investigators were acting against China’s Huawei Technologies on allegations it stole technologies. At the same time, a bipartisan group of lawmakers in Congress has put forward legislation that would limit what U.S. companies could sell Chinese telecom operators.

Meanwhile, a North Korean emissary’s visit to Washington resulted in an agreement to arrange a second summit between President Trump and Kim Jong Un at end-February. Though this would appear to be a bilateral North Korean-US affair, how it is resolved will be a test of whether the U.S. and China can find collaborative solutions to major global problems when their interests clash.

Over the past six months, North Korean leader Kim Jong Un has met four times with President Xi Jinping, his most important security guarantor and economic partner. Given Beijing’s influence, expect whatever denuclearization deal North Korea offers to contain efforts to weaken the U.S. presence in the region. Those may include freezing U.S. military exercises, and eventually gaining agreement from President Trump to remove U.S. troops from South Korea — and the U.S. nuclear umbrella over it as well.

On the trade front, U.S. markets rallied last week on news that China had offered a six-year buying spree from 2024 – not coincidentally covering the rest of a Trump first term and re-election – that would increase goods imports from the U.S. during that time by a combined value of more than $1 trillion.

According to these reports, China would seek to reduce its trade surplus to zero by 2024 from $323 billion last year. U.S. officials reportedly responded to the offer, made last month during trade talks in Beijing, with skepticism and a demand that the gap be closed within just two years.

Whatever the final details might be, it’s a fair wager that the two sides will reach some sort of agreement before their March 1 deadline, because both countries’ leaders want one.

With his growth slowing dangerously, Chinese President Xi is eager to head off the threatened increase of tariffs on $200 billion worth of Chinese goods from 10 to 25 percent. This week, Beijing already announced measures worth $193 billion, designed to stimulate the country’s flagging economy.

As for President Trump, he has expressed increasing concern about how his trade dispute with China is dragging down markets. For the moment, administration insiders say Trump is siding more with Treasury Secretary Steve Mnuchin‘s penchant for deal-making, rather than U.S. Trade Representative Robert Lighthizer’s harder line approach, that seeks more fundamental changes in how China operates.

Though it is harder to “price in” the potential impact of an escalating U.S.-Chinese tech war, the impact on the global economy and geopolitics will be far greater and of generational consequence. History has shown that the societies that dominate technological advance also gain other advantage, from military superiority to national prosperity.

At the same time, a bipartisan group of U.S. legislators introduced bills that would ban the sale of U.S. chips or other components to Huawei, ZTE Corp or other Chinese telecommunications companies that violate US sanctions or export control laws.

Those actions come at a time when the U.S. intelligence is increasingly concerned that at current trajectories, China could come to dominate emerging technologies. The concern is most critical in the area of artificial intelligence, where China’s complete control of vast reservoirs of data without privacy protections could be decisive.

The growing danger is that the tech race could become the primary battleground in a struggle between democracy and autocracy – and between China and the U.S. The dangers of a technological cold war, a zero-sum contest for global dominance that ultimately separates Chinese and U.S. tech sectors from each other and divides up the world, are increasing.

A better outcome would be a collaborative future where the two sides manage their differences, competing vigorously for markets and global influence; while at the same time agreeing to common, transparent and accountable international standards that protect third parties and individual rights.

On current trajectories, however, conflict is more likely.

As Henry Kissinger recently said: “We’re in a position in which the peace and prosperity of the world depend on whether China and the United States can find a method to work together, not always in agreement, but to handle our disagreements. … This is the key problem of our time.”