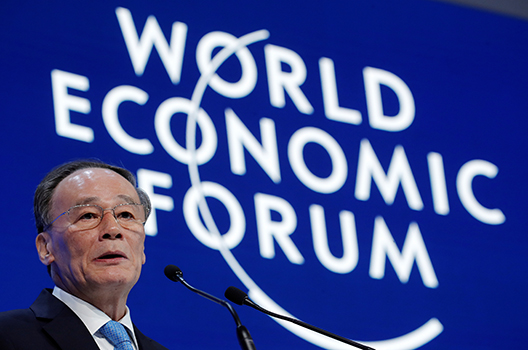 DAVOS, SWITZERLAND – The star who stole the stage at the annual meeting of the World Economic Forum, which just ended here yesterday, wasn’t the stuff of flesh and blood but of data-driven algorithms.

US President Donald Trump, China’s Xi Jinping, India’s Narendra Modi, France’s Emmanuel Macron and Great Britain’s Theresa May were no shows at this gathering of global movers and shakers, occupied with more pressing matters at home.

That left hundreds of global business executives with less distraction as they turned their attention to Artificial Intelligence (AI), a term few of them knew even a couple of years ago and a technology they still don’t fully comprehend.

Yet in one session after another, they shared what they were (or weren’t) doing about it and learned how AI would transform their industries, their societies and international relations, perhaps as no technology before it.

Not even news late in the week from Venezuela shifted the conversation all that much. It may take weeks to determine whether Nicolás Maduro can hang on to power in Caracas with Russian, Chinese and Cuban backing — and against US and widespread Latin American opposition.

Yet even that big of a geopolitical story, in a pivotal Latin American country that holds the world’s largest oil reserves, couldn’t compete with a matter that was already hitting so many Davos delegates so directly, as an all-consuming bottom-line issue for companies.

Most troubling for the American business leaders in Davos, who had grown accustomed to being atop the global technological heap, was that they heard time and again how quickly they were falling behind their Chinese peers. Though it is a tech race most Western executives feel is only on its first laps, they heard how President Xi had declared a sort of space race or Manhattan Project around AI that is already delivering measurable results.

As a sign of the times, PwC used its annual survey of some 1,400 global CEOs – released every year here at Davos – to ask business executives whether they thought AI or the Internet would have the greater long-term impact. Some 84 percent of Chinese executives laid their bets on AI, while only 38 percent of their US colleagues agreed.

That was reflected as well in how those polled by PwC said they had already deployed AI in their companies. A full 25 percent of Chinese executives reported they had utilized AI broadly compared to just 5 percent of American executives.

“It’s rare you get that big of a difference between two superpowers,” said Tim Ryan, US chair of PwC.  Although most US companies now have pilot projects using AI, he said, their Chinese comrades are already scaling their initiatives.

In my own Davos presentation, “The Geopolitics of the Fourth Industrial Revolution,” I stated bluntly that China was on track to take the commanding heights of AI and that the consequences could be historic in nature.

Countries that are most innovative and technologically advanced tend to dominate international relations.

President Xi Jinping has told recent, high-level visitors that China suffered the historic consequence of being an also-ran in those three non-Maoist revolutions (my wording, not his). Having learned from history what it takes to be the global leader, he is determined to dominate the Fourth Industrial Revolution, marked by breakthroughs in technologies that include artificial intelligence, advanced manufacturing, robotics, nanotechnology, bioengineering and quantum computing.

To achieve that, he has thrown all his country’s energy behind AI research and development, thus also focusing the work of the country’s growing ranks of hungry, intensively competitive entrepreneurs and start-ups. By the end of 2017, Chinese venture capital investors had poured enough into AI startups that they made up 48 percent of all AI venture funding globally, surpassing the US for the first time.

“When I go to China,” said Blackstone’s Steve Schwarzman on a panel here, “there’s almost an endless stream of people who are showing up developing new companies. The venture business there in AI-oriented companies is really exploding with growth.”

Financier and philanthropist George Soros put it less generously at a private dinner.  “China isn’t the only authoritarian regime in the world, but it’s undoubtedly the wealthiest, strongest and most developed in machine learning and artificial intelligence. This makes Xi Jinping the most dangerous opponent of those who believe in the concept of open society.”

National leaders who were in Davos, in particular Japanese Prime Minister Shinzo Abe and German Chancellor Angela Merkel, expressed concern about the unregulated consequences of data-driven AI. Merkel called for an EU wide “common digital market” and for international oversight that would head off increasing public opposition to technological advancements. Abe said he would use his G-20 chairmanship to advance “worldwide data governance” at the group’s Osaka summit in June.

Chinese Vice President Wang Qishan, speaking as the rising AI power, provided a nod toward more international coordination in oversight of technology. More worrying, with much of the West worried about AI’s potential for authoritarian surveillance, he said nothing about privacy and said each country should be free to set its own policies.

“We need to respect the independent choices of model of technology management and of public policies made by countries,” said Mr. Wang.

The metaphor one leaves Davos with is a troubling one: President Trump cancelled his participation at the last minute, due to the government shutdown, keeping at home what would have been one of the largest US government delegations ever to be fielded here. Count that as an opportunity missed, at a time when Beijing is in overdrive.

More harmful yet is the Trump administration’s absence from discussion of international data governance norms ahead of the G20. Of even more lasting damage would be if the US doesn’t go beyond punitive actions against Chinese tech competitors to advance a national campaign to master the technologies of the Fourth Industrial Revolution.

It took a Soviet satellite called Sputnik in 1957, the first ever in space, to awake America’s animal spirits and spur our competitive streak. The challenge to US leadership this time is more sophisticated, resourceful and advanced.

The failure to respond would damage US interests for decades to come and accelerate the decline of US global leadership.