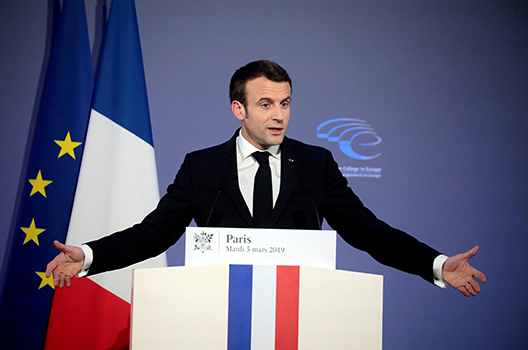 French President Emmanuel Macron this week stirred up a robust and healthy debate with his letter published in newspapers of all 28 EU nations, calling for a “European renaissance.” First, however, he will have to reverse a European unravelling, both political and economic.

Markets are bracing for the U.K.’s parliamentary vote on Brexit’s fate next week, the European Central Bank this week sharply downgraded growth projections to a job-killing 1.1 percent and reintroduced stimulus, and Italy is moving to officially tie its wagon to China’s Belt and Road Initiative — choosing market access over European cohesion.

This all comes as a new era of major power competition unfolds, the results of which will decide whether Europe is a global player or the football. Will Europe shape outcomes or instead be shaped by more determined and coherent actors? As China grows more politically and commercially assertive, as Russia turns more aggressive and disruptive, as the United States displays less predictability and commitment, “we can’t sleepwalk to a diminished Europe,” Macron writes.

The letter is getting traction both due to its timing, coming shortly before the European Parliament’s most decisive elections yet in May, and due to its novel approach. What Macron has done is borrow the language and immigration issues of the populist nationalists — a winning approach in past months — and deploy it on behalf of the European Union.

He takes a swipe at the nationalists who are leading astray the “citizens of Europe,” even as he joins them in their criticism of the unnamed European Union politicians and Eurocrats who have done far too little to address their legitimate concerns.

“Nationalists are misguided when they claim to defend our identity by withdrawing from the EU,” he writes, “because it is European civilization that unites, frees, and protects us. But those who would change nothing are also misguided, because they deny the fear felt by our people, the doubts that undermine our democracies. We are at a pivotal moment for our continent, a moment when together we need to politically and culturally reinvent the shape of our civilization in a changing world. Now is the time for a European renaissance.”

His letter continues with that Euro-populist bent, a Macron re-invention for sure. The new institutions and approaches he proposes are designed to take the wind out of the anti-European, nationalist right and to answer public fears.

On the most neuralgic matter of immigration, he argues for a Europe “that protects both its values and its borders.” He proposes a common border force and a European asylum office under a newly created European Council for Internal Security.

On defending freedom, he takes a whack at unnamed Russians and says the EU should ban the funding of European political parties by foreign powers. He argues that a new European Agency for the Protection of Democracies should provide all EU states with the means to protect their election process against cyberattacks and manipulation.

Many of his ideas are in a similar, populist vein — protecting European sovereignty against (U.S.) “digital giants” and “in the face of aggressive strategies by the major powers.” This Macron sees the euro as a bulwark against which EU countries can “resist the crises of financial capitalism.”

Perhaps most telling was that Macron’s letter won a compliment from Hungarian President Viktor Orban, the EU’s favorite populist bugbear, saying that it “could mark the beginning of a serious European debate… In the details, of course, we have differences of views, but far more important than these differing opinions is that this initiative be a good start to a serious and constructive dialogue on the future of Europe.”

To be sure, Macron will have to be a far better politician at home and across Europe than he has been thus far if he is to reclaim the narrative of the populists with his own arguments that a cohesive Europe is a far more effective way to protect European citizens that the nation-state alone.

At home, Macron’s support levels have fallen to 31 percent amid the continued yellow jacket protests against him. He will have to first deliver on reforms there, where sluggish growth and high unemployment have historically hampered France’s ability to sell its vision to its partners.

Across Europe, he has been unable to personally integrate other pro-EU forces and sometimes appears aloof from what other Europeans think. And though the EU will need very close links to the United Kingdom on defense and trade even after Brexit, Macron has been in the front of the line of those ready to banish London. The fact that he has undertaken this initiative without German Chancellor Angela Merkel also weakens his chances for success.

That said, the Atlantic Council’s Ben Haddad, new director of the Future Europe Initiative, sees in the unfolding debate ahead of EU parliamentary elections a historic opportunity for the most robust and truly pan-European debate leading into what might be its most democratic elections.

Ironically, it has been the nationalists, he says, who have done most to join ranks across EU countries, forming a pan-European coalition that is making similar arguments in all states. Macron now has joined that battle, though it remains to be seen whether he can muster at the European level the sort of movement that carried him inside France to the presidency.

The stakes are of a historic nature.

“Europe is sleepwalking into oblivion,” George Soros recently warned, “and the people of Europe need to wake up before it is too late. If they don’t, the European Union will go the way of the Soviet Union in 1991. Neither our leaders nor ordinary citizens seem to understand that we are experiencing a revolutionary moment, that the range of possibilities is very broad, and that the eventual outcome is thus highly uncertain.”

European Union dissolution of the Soviet sort may seem a long way off, but if Macron and others are unable to reawaken a European vision and change the political and economic trajectory, irrelevance and unraveling is the likely outcome.

Image: French President Emmanuel Macron delivers a speech during the closing session of the Intelligence College in Europe meeting at the Foreign Affairs Ministry in Paris, France March 5, 2019. (Ludovic Marin/Pool via REUTERS)