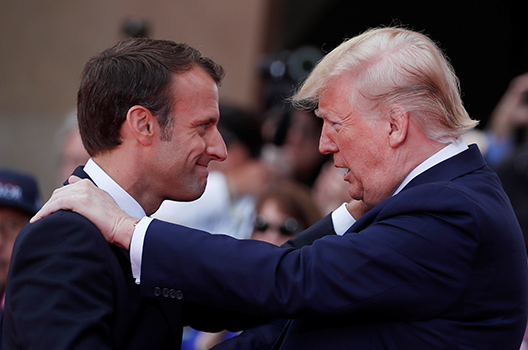 President Trump’s own National Security Strategy describes the primary US challenge to be major power competition with authoritarian China and Russia, yet the world’s leading democracies instead could be locked in a series of morale-sapping, growth-slowing and politically polarizing skirmishes.

Given political will and leadership attention, each and everyone one of these disputes could be avoided. European Union and US officials could negotiate the Airbus-Boeing dispute bilaterally, the OECD could accelerate ongoing talks on the tech taxes, Germany could head off North Stream sanctions by getting a Russian commitment to still transit gas through Ukraine, and auto tariffs could be managed in new trade and investment talks.

Deal-maker-in-chief Trump should direct his negotiators not only to settle these potential disputes but at the same time revive the transatlantic talks that were dropped early in his administration, known as TTIP.

The logic is compelling given that China is the more significant trade offender. More to the point, the North American-European economy still is the largest and most prosperous economic bloc in the world, accounting for a third of global GDP in terms of purchasing power and generating up to 16 million jobs on both sides of the Atlantic.  The US and Europe account for 64% of global outbound foreign direct investment and 51% of global personal consumption.

What’s been lost in the more transactional, tariff-focused Trump administration is the centrality of the transatlantic economic space as the world’s most important both in setting global rules and, more often than not, playing by them.

Ahead of 2020 presidential elections, a Trump move to acknowledge and act on this would also allow him to counteract the most persuasive criticism of his foreign policy, namely that he is alienating allies without yet showing wins on four significant fronts regarding rivals: China and its unfair trade, Iran and its malign behavior, North Korea’s nuclear proliferation and Venezuela’s despotic dictatorship.

“If you were to do a cost-benefit analysis of Trump’s foreign policy,” writes David Ignatius in the Washington Post, “the damage he’s done to allies would far outweigh any gains against potential adversaries.”

The leading Democratic presidential candidate Joe Biden, the former Vice President, made clear this week that he would confront Trump on those terms, as someone who has embraced autocrats and neglected allies and the defense of democracy globally.

“No army on Earth can match the electric idea of liberty,” Biden said this week  in his first major foreign policy speech of the campaign at the City University of New York. “It jumps borders and transcends languages. And can supercharge communities, ordinary citizens and activists. We must once again harness that power and rally the free world.”

For President Trump to defuse this summer’s potential for an escalating transatlantic trade conflict, the first issue up on the agenda is the Airbus-Boeing dispute, and that may set the tone for the overall relationship.

At the same time, the US this week announced it had started a section 301 investigation into whether a new French tax on major tech companies was unfair, the same move that preceded punitive tariffs on China. By summer’s end, US sanctions could face European companies involved in the North Stream 2 pipeline. Tariffs on European car imports could follow by November.

As early as next week, the WTO arbitrator is expected to decide how much of the $11.2 billion of tariffs threatened by the Trump administration on the EU can be applied. The EU has published its own preliminary list of US goods in a $20 billion tit-for-tat plan for retaliatory levies over subsidies to Boeing, though the WTO arbitrator would rule on these several months later.

The bottom line is that the WTO has determined that both Boeing and Airbus, the world’s two largest plane makers, have received billions in illegal or improper government subsidies to gain advantage in global markets.

“We are both sinners, so with that we are entitled to take action against each other,” said European Union Trade Commissioner Cecilia Malmstrom this week in Brussels. “This would be very unfortunate, of course, because even if we both have sinned, we should put our different sanctions in the freezer and say, ‘let’s talk.”

For its part, the United States Trade Representative set the stage by publishing this month a hit list of $4 billion in EU goods to target in retaliation for European aircraft subsidies. The products include cheese, cherries, meat, olives and past alongside whiskey, helicopters and cast-iron tubes and pipes. USTR will hold a public hearing on the list on August 5.

Earlier, the EU published a preliminary list of US goods worth $20 billion in retaliatory tariff targets over subsidies to Boeing. That listincludes a food fight of ketchup and nuts as well as bicycle pedals and video game consoles.

These tit-for-tat actions would be WTO sanctioned, but it’s hard to imagine a better time for a negotiated solution as consumers and smaller companies on both sides of the Atlantic would lose – and only Chinese manufacturers would gain.

German Economy Minister Peter Altmaier was in Washington this week along with Peter Beyer, Germany’s transatlantic coordinator and a member of parliament, trying to head off the aircraft war, the Northstream 2 sanctions and the European car important tariffs.

Altmaier said at a German Marshall Fund event that Washington and Brussels could reach a trade deal on industrial products by year’s end, were there political will. He said if the two sides could “streamline and coordinate our respective efforts a little more,” they could better address China.

Solutions will only be found, however, if both sides recognize the fight isn’t one only about aircraft but whether one can shift from confrontation to common cause to better shape the global future.

Otherwise, get ready for a hot summer.