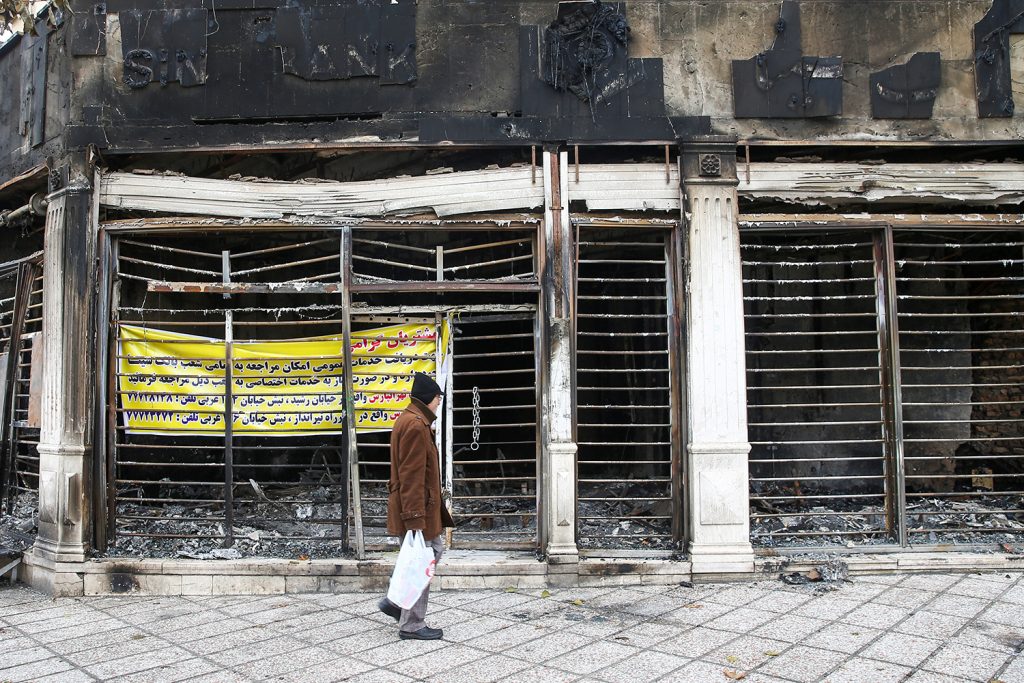 Dubai, United Arab Emirates – Iran faces a time of reckoning, and the stakes couldn’t be higher: potential war with the United States, the reversal of its gains across the Middle East and the future of its revolutionary state.

It would surprise most Americans how little the Arab public and media here – nine time zones from Washington DC – were occupied this week with the Congressional hearings on impeaching President Trump.  They instead were focused on the crisis closer to the door in Iran, just 600 miles away from the UAE as the drone flies.

This defining moment for Tehran – perhaps the most critical since the Iranian Revolution of 1979 – has been prompted by the Trump administration’s “maximum pressure” campaign of sanctions, Iran’s dangerously declining economy, and the cumulative effect of Tehran’s domestic malfeasance and regional overstretch.

Growing protests in Iran, Iraq and Lebanon have charged the atmosphere with urgency.

What’s clear is that the growing scale of the challenge makes it difficult for Iran to pursue its earlier approach toward mounting US pressure: hunkering down and waiting out the Trump administration through the November 2020 election in the hope of Democratic victory.

What’s less clear is whether Tehran, over the short term, will respond to this historic test with more military escalation, diplomatic compromise – or a combination of both.

Diplomats in the Middle East argue that the United States has put itself in a good position to shape that choice. They argue Washington could take advantage of Iran’s increased difficulties by working more closely with European and Mideast allies to frame an offer that would ease sanctions but put in place a process that would block Iran’s path to a nuclear weapon and end its foreign policy of regional meddling.

However, that sounds like wishful thinking in the world of Washington’s distractions, transatlantic distrust and Iranian outrage. Trump administration officials are sanguine, arguing that at the very least the sanctions have cut deeply into the resources Iran can invest in its proxies. Protests at home and abroad are usefully soaking up regime energies.

The danger is that may risk further military escalation to gain attention and leverage, following its June 20 shooting down of the American drone and its September 14 strike on Saudi oil processing facilities. Or it could take further steps away from its nuclear agreement of 2015, having this month resumed low grade uranium enrichment at its underground Fordow nuclear plant to 60% of fissile purity, not far from the 90% level required for nuclear bomb fuel.

It’s hard to imagine Iran entering the expanded talks the US would want without first getting the sanctions relief the Trump administration has thus far refused. Yet it’s just as difficult for Iran to imagine that the status quo is sustainable of a collapsing economy and rising protests.

The challenges to the Iranian regime have been sharpened by ongoing demonstrations at home since November 15 that have resulted in at least 106 and as many as 200 deaths in 21 cities, according to Amnesty International. Those numbers have been increasingly difficult to verify or update due to the regime’s shutdown of the internet this week. (The US Treasury on Friday added the Iranian Communications Ministry and its minister to the sanctions list for that action.)

At the same time, widespread protests in Iraq and Lebanon are also taking aim at Iran’s influence and proxies. What’s at risk for Iran are decades of investments that have transformed the country into the Mideast military and political power it is today.  U.S. officials reckon Iran has spent some $16 billion on Iraq, Lebanon and Yemen since 2013 – and $10 billion on Syria.  It is estimated to spend $700 million a year on Hezbollah.  That support is increasingly difficult to sustain both financially and politically among Iranians – and there are new reports that Hezbollah, Iran’s proxy in Lebanon, increasingly has been engaged in fund-raising drives.

What’s also changed is that Iranian leaders are conceding that the economic pressures on them are growing – after a long period of insisting they could easily sustain the sanctions. They are taking unprecedented and perhaps counterproductive measures to address the problem. What triggered the current protests was Iran’s midnight announcement on November 15 that it would cut fuel subsidies and increase the price of gasoline by 50%.

“We all know too well that we are not in normal and easy circumstances,” Iranian President Hasan Rouhani said recently, calling it the worst economic situation in four decades. “The conditions are very complicated … Since the beginning of the revolution until today, we have never faced so many difficulties in moving an oil tanker from our ports and harbors to the world.”

Though Iran’s economic numbers can be unreliable, what’s clear is that under the sanctions regime its oil exports have dropped from 2.5 million barrels a day after the lifting of sanctions in 2016 to 400,000 barrels per day and perhaps as little as 200,000.

Rouhani has said that some $25 billion of the state’s annual budget of $39 billion has been covered by oil exports. Beyond that, the export decline has prompted the International Monetary Fund to project that Iran’s economy would shrink by 9.5% while inflation would surpass 35%. Iran’s own inflation projection of 42% is even more pessimistic.

The history is mixed of economic sanctions bringing about political change.

That said, it is difficult to imagine a moment when the West’s leverage could be higher. Thus, Germany, Britain and France should get ready to consider moves to reinstate international sanctions on Iran over breaches of its 2015 nuclear deal, as suggested by German Foreign Minister Heiko Maas, and such deeper sanctions should be at the same time accompanied by more intense diplomacy.

The problem from the Western side, say leading diplomats, is that it’s hard to know what Iran wants nationally and regionally. It’s been even more difficult to known with whom one can negotiate most effectively, as it is Supreme Leader Ali Khamenei – with whom no one has negotiated – who holds the cards.

Until those answers are known, the best approach is to continue and expand the maximum pressure and prepare for a range of increasingly unpredictable Iranian responses – focusing as deeply on deterrence as diplomacy.

Must reads from a world in transition

One of this week’s two must-reads from the New York Times grows out of an unprecedented leak that “exposes Tehran’s vast influence in Iraq, detailing years of painstaking work by Iranian spies to co-opt the country’s leaders, pay Iraqi agents working for the Americans to switch sides and infiltrate every aspect of Iraq’s political, economic, and religious life.”

The New York Times reporters – Tim Arango, James Risen, Farnaz Fassihi, Ronen Bergman, and Murtaz Hussain – build a narrative of extraordinary value for those who wish to understand Tehran’s regional influence, from secret Iranian intelligence cables obtained by the The Intercept and shared with the New York Times (and published simultaneously by both organizations).

It’s journalism at its best, with details made for a movie script: meetings in dark alleyways and under the cover of a hunting excursion or birthday party, with informants luring at the Baghdad Airport, and sources plied with gifts of pistachios, cologne, saffron or bribes. Read More →

I’m one of those lucky enough to know Fiona Hill both as a close acquaintance and as one of America’s leading Russia experts, whose knowledge I have frequently relied upon. Yet even with that, I was impressed by the richness of her public testimony at impeachment hearings this week, that debunked the “fictional narrative” designed to “destroy the faith of the American people in our democracy.”

You can read a full transcript of her deposition and testimony, watch her part of the hearing, or you can read John Cassidy’s good account in the New Yorker. Here’s the quote that has been repeated most often, including in the “tile” that accompanies our choice of Fiona Hill as our “Person-of-the-Week:

“Some of you on this committee appear to believe that Russia and its security services did not conduct a campaign against our country – and that perhaps, somehow, for some reason, Ukraine did. This is a fictional narrative that has been perpetrated and propagated by the Russian security services themselves.” Read More →

Elliot Ackerman, best-selling novelist and Purple Heart recipient, doesn’t just show bravery on the battlefield. In this case, he questions – as only a decorated soldier could do – President Trump’s recent pardons of Army First Lieutenant Clint Lorance and Army Major Mathew Golsteyn, as well as the President’s order direction to promote Special Warfare Operator First Class Edward Gallagher to the grade of Chief Petty Officer.

“The confidence to fight doesn’t come from laxity but rather from discipline,” he writes. “When unit discipline breaks down – when lieutenants start shooting unarmed civilians (in the case of Lorance), when special operators take matters into their own hands and begin executing prisoners (the case of Golsteyn, and, I would content, Gallagher) – the confidence to fight evaporates. In fact, you aren’t fighting anymore. You’re doing something altogether different: you’re killing.” Read More →

The End of the United Kingdom May be Nearing
Rodney Jefferson, Dara Doyle and Alex Morales / BLOOMBERG BUSINESSWEEK

With crucial December 12 elections approaching rapidly in the United Kingdom, it’s worth considering one of the most dramatic potential outcomes of Brexit: the eventual breakup of the Union.

“While England is split over how—or whether—to deliver Brexit and move the country forward, the political dynamics in the three other constituent parts of the U.K. seem more about whether the country should exist at all,” write the Bloomberg Businessweek authors.

They track how a path toward a new Scottish independence referendum could unfold, they argue that in Northern Ireland new ideas regarding Irish reunification are emerging, and how even in Wales, which voted in favor of Brexit, a new poll shows increased support for a divorce from the English. Read More →

5. CHINA AND THE UIGHURS

Working from treasure trove of leaked documents, the New York Times’ Austin Ramzy and Chris Buckley provide an unprecedented view inside the continuing clampdown in Xinjiang, in which the authorities have corralled as many as a million ethnic Uighurs, Kazakhs, and others into internment camps and prisons over the past three years.

The motivation for the leak is as revealing as the story’s details. The authors say that the leak “suggests greater discontent inside the party apparatus over the crackdown than is previously known.” The authors say the papers “were brought to light” by a member of the Chinese political establishment, who requested anonymity, in the hope that their discovery would prevent party leaders “from escaping culpability for the mass detentions.” Read More →

Quote of the week

Waves of protests have hit Iraq this past October and November, calling for the resignation of the post-war government and sweeping changes. Last month alone, there have been reports of hundreds of protesters killed and thousands wounded by security forces in clashes across the country, from Tahrir Square in Baghdad to cities like Diwaniyah, Najaf, […]

Ukraine got its ships back but at what cost?

The press forgot something significant in its coverage. Yes, Ukraine has been calling for the return of these ships for months, and yes their status would have been a serious obstacle to peace talks, but the ships were illegally fired upon and seized while legally traveling in what should have been safe waters.

Iran protests: A quest for reform turns into widespread discontent

Popular protests are flaring up in the Middle East. From Lebanon to Iraq and now Iran, they show the weakening of the social contract between the population and their government. In the Islamic Republic, the post-revolutionary social contract was born on a populist promises of justice, but decades of endemic political and economic inefficiencies wiped […]