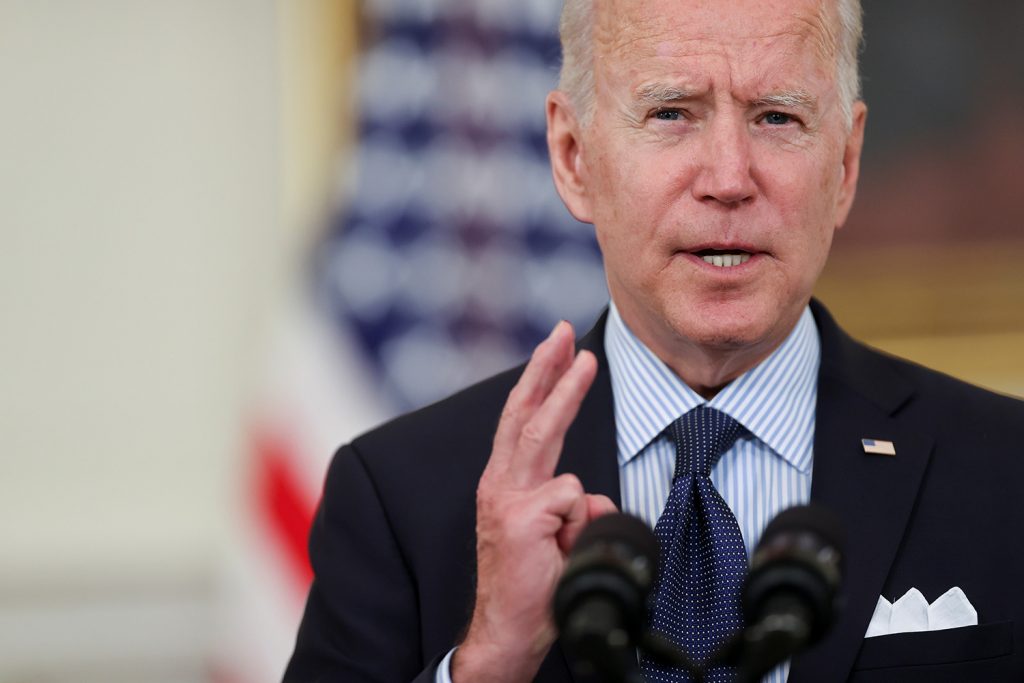 US President Joe Biden’s long years of Senate and White House experience taught him that the Middle East could be quicksand for his presidential ambitions.

So it was no accident that his Middle East goals were modest and aimed at avoiding resource-draining distractions from his domestic ambitions and international priorities: recharging the US economy and rallying European and Asian allies to deal with China.

The old logic was that US withdrawal from Middle East affairs would leave a dangerous vacuum. The new thinking was that by keeping some distance, one could encourage greater self-reliance.

What has taken Biden administration officials by surprise is how quickly a historic opportunity has emerged. A positive series of loosely connected events across the region offers the best opportunity in memory for reducing tensions, ending conflict, building economic progress, and advancing Middle East integration.

A region abuzz with opportunity

The combined effect of these events should be to prompt the Biden administration to recalibrate its “do-no-harm” approach to the region and lift its ambitions. For starters, the administration should focus on the four leading indicators of change and explore how to build upon them.

To help move any of this along would not require the sort of military deployments, endless commitments, or costly investments that have soured Americans to the region. What it would take is a heightened level of diplomatic and economic creativity, and the dusting off of history books to study how the United States helped Europe end centuries of conflict after World War II and build the institutions and cooperative habits that still endure today.

The process should begin by studying the dynamics of what’s unfolding, staying out of what’s working well, and engaging where doing so would support fragile progress.

Weary of the financial and reputational cost of their disputes, countries long at odds are talking—Saudi Arabia with Iran, Turkey with Egypt, the UAE with Qatar, and Israel with any number of Arab states, alongside other emerging combinations.

Warring parties in Libya and Yemen, though far from solutions, are looking for ways to de-escalate. National leaders have stepped up their efforts at economic growth, sensing the demands of a well-educated, rising generation that understands global standards.

Most intriguing, Saudi Arabia and Iran have been holding secret talks since January, apparently without US involvement and brokered by Iraq.

In a dramatic change of tone, Saudi Crown Prince Mohammed bin Salman said, “We do not want the situation with Iran to be difficult. On the contrary, we want it to prosper and grow as we have Saudi interests in Iran, and they have Iranian interests in Saudi Arabia, which is to drive prosperity and growth in the region and the entire world.”

The Crown Prince has many reasons for changing course. Among them was the shock of a highly sophisticated Iranian attack on Saudi oil installations in September 2019, costing Riyadh some two billion dollars.

The event not only exposed the kingdom’s vulnerabilities and Iran’s growing capabilities; it also raised doubts about US security guarantees, even from as close a friend as US President Donald Trump, who did not retaliate on Riyadh’s behalf.

“The concern that Biden will make overly nice with Iran while drawing down from the region and de-prioritizing the bilateral relationship is crucial to [Saudi Arabia’s] calculus right now,” the Atlantic Council’s Kirsten Fontenrose told me.

Reeling economically and isolated politically, Turkey also has been mending fences with Egypt, Saudi Arabia, the UAE, and Israel, who have been wary of Ankara’s support for the Muslim Brotherhood and other groups they consider extremist.

And building off last year’s historic Abraham Accords, a senior Middle East official says Israel and the UAE will start talks next month on a free-trade agreement, just one of many efforts to seize the momentum of normalized relations.

Continuing to act as an outsized regional elixir for economic modernization and political moderation, the UAE this week liberalized its residency requirements to attract wealthy expats. And it has set the goal of doubling its gross domestic product (GDP) within the decade, in particular through technological investments.

Separately and inspired by the Abraham Accords, officials from Israel, the UAE, Greece, and Cyprus met in April, with the backdrop of the Eastern Mediterranean, to deepen their cooperation on everything from energy to fighting the pandemic.

Why Biden can’t afford to miss this moment

Taken individually, these indicators may appear more tenuous than transformational. Tie them together and build upon them more methodically, however, and the Middle East could have the beginnings of the sort of conflict de-escalation, economic cooperation, and institution-building that Europe enjoyed after World War II.

With growing security threats in the Horn of Africa and new uncertainties regarding Afghanistan’s future, the United States would like to be able to call upon steadier Middle East partners to better address growing uncertainties elsewhere in their broader neighborhood.

No one should expect the Middle East in the short term to sprout its own equivalent of the European Union, NATO, or the Commission on Security and Cooperation in Europe, which provided the venue for talks between the Cold War’s rival factions.

One also should not expect the United States to play the galvanizing role it did then, when it had half of global GDP, much of Europe was in rubble, and the Soviet Union was rising as an adversary to counter.

That said, it would be wrong to underestimate the positive potential US influence.

The Trump administration’s support for the Abraham Accords helped unlock growing cooperation among the signatories: Israel, the UAE, Bahrain, Morocco, and Sudan.

Biden’s resumption of efforts to negotiate with Iran, his focus on human-rights issues, and his reluctance to feed the region’s divisions also play a positive role, as long as negotiators don’t set the bar too low to lift sanctions on Tehran.

What the Biden administration must avoid is listening to the wrong-headed conclusion of some analysts that US disengagement from the region would accelerate progress. What’s needed instead is consistent support for the region’s rising forces of modernization and moderation, which have gained but still have far to go.

#1 The digital currencies that matter
THE ECONOMIST

Bitcoin may have taken the finance world by storm, but The Economist writes that it is central bank-backed digital currencies that could become the “most revolutionary.”

The article highlights the advantages that state-backed digital currencies could bring for governments and consumers alike, for example by allowing central banks to make “instant payments to citizens and cut interest rates below zero.”

The advent of “govcoins” will come with real dangers too, however. To name a few, retail banks risk losing out on customers, governments could gain unprecedented levels of state control over their citizens, and new geopolitical battle lines will be drawn. Many of these issues involve China, whose central bank has already begun testing its digital currency. Read More →

In Foreign Affairs, Andrea Kendall-Taylor and David Shullman tackle what many believe is emerging as the world’s most perilous partnership: the relationship between China and Russia.

“The problems the two countries pose to Washington are distinct, but the convergence of their interests and the complementarity of their capabilities—military and otherwise—make their combined challenge to US power greater than the sum of its parts,” they write.

The authors argue that the United States needs to make a concerted effort at curtailing their relationship and take “proactive measures to exploit its fissures.” Read More →

As fears over closer relations between China and Russia grow, David Ignatius points out that the real nightmare scenario for the United States is an advancement of their nuclear-weapon systems that could “destabilize the balance of terror.”

The Biden administration has been focused mostly on limiting nuclear weapons, while China and Russia are focused on modernizing theirs. China doesn’t even want to talk about curbs until it reaches parity with the United States and Russia.

Writes Ignatius: “China’s accelerating nuclear program vexes American analysts. During the Cold War, the United States and Russia developed a language for thinking about nuclear weapons and deterrence. Leaders of both countries understood the horrors of nuclear wear and sought predictability and stability in nuclear policy. China lacks such a vocabulary for thinking about the unthinkable.” Read More →

Earlier this year, Admiral James Stavridis and Elliot Ackerman published 2034: A Novel of the Next World War—a story about what war between the United States and China would look like.

In an interview with Der Spiegel, Stavridis, who served as supreme allied commander Europe and sits on the Atlantic Council’s board of directors, warns of the real risks of conflict breaking out with China—and that it could come sooner than we think.

“A lot of the critical reaction to the book has been… the date is wrong,” says Stavridis. “It’s not 2034, maybe 2024 or 2026. Any number of my very senior military friends have said, ‘You’ve written a cautionary tale about a war that you think is 10 to 15 years away, but many of us believe it will come sooner.” Read More →

No one understands the gravity of Biden’s decision to withdraw all US troops from Afghanistan by September this year better than Afghan President Ashraf Ghani.

In Foreign Affairs, Ghani writes about how this is a “turning point for the country” and discusses how Afghanistan should move forward. His message to the Taliban is clear.

“The US decision surprised the Taliban and their patrons in Pakistan, and it has forced them to make a choice,” he writes. “Will they become credible stakeholders, or will they foster more chaos and violence? If the Taliban choose the latter path, the [Afghan National Defense and Security Forces] will fight them. And if the Taliban still refuse to negotiate, they will be choosing the peace of the grave.” ​​​​​Read More →

While the final list of candidates will not be announced by the Guardian Council before May 26, it can be said with certainty that whoever emerges victorious will not have a material impact on Iran’s domestic or foreign policy.

Image: U.S. President Joe Biden delivers remarks on the state of the coronavirus disease (COVID-19) vaccinations from the State Dining Room at the White House in Washington, D.C., U.S., May 4, 2021. REUTERS/Jonathan Ernst